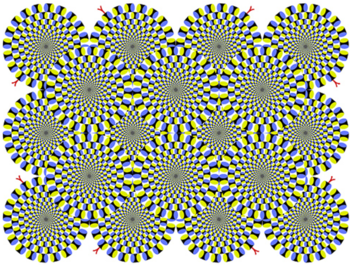 One would assume offhand that the pathways for synthesis and assembly of the major constituents of a bacterial cell “talk to each other,” i. e. they are tightly interwoven processes. Tampering with the biosynthesis of one should affect all the others, right? Wouldn’t you expect, for instance, that if protein synthesis were to be suddenly stopped, nucleic acid synthesis would also stop and vice versa? Of course, in time this has to happen, but how fast? For a while at least, enzymes and ribosomes that present at time zero may well continue to churn out their products. Indeed, several major biosynthetic activities act as if they were independent of one another initially at least. (Not all, however. We know, for instance, that when bacteria are stressed, they undergo the stringent response wherein the synthesis of ribosomal and transfer RNAs ceases abruptly but that of mRNA continues.) The major biosynthetic functions of a bacterial cell act as if compartmentalized, so that inhibiting one does not necessarily result in the immediate inhibition of all others. It’s like when a car runs out of gas, it can still coast for a while. Thus, we must keep the time scale in mind. Over a short time range, say a couple of generation times, some of the biosynthetic activities continue and the cells become distinctive at a subcellular as well as a molecular level.

It becomes relatively easy to see under the microscope the gross morphologic changes induced by such biosynthetic imbalance. For example, when synthesis of the septal peptidoglycan is stopped, the cells grow into long filaments because cell division (but not nucleic acid or protein synthesis) is selectively inhibited. Or, when protein synthesis is stopped, the nucleoids reorganize into characteristic tight balls yet DNA synthesis continues. Consequently, just looking at bacteria that have been treated with antibiotics should reflect the mode of action of the drug. All it takes is a modern fluorescence microscope, appropriate staining techniques, special analytical capabilities, and a sharp understanding of bacterial cell biology. These requirements came together in the labs of the Poglianos, pioneers of some of these techniques, who recently published a paper on this approach.

These researchers stained drug-treated bacteria with dyes of different colors, DAPI (blue) for DNA and FM4-64 (red) for the membrane. The cells will now display a distinct aspect depending on the macromolecular biosynthetic activity being inhibited. Thus, it is possible to sort out the effect of drugs that inhibit protein, RNA, DNA, lipid, or peptidoglycan synthesis, or all simultaneously, just by looking at the cells under the microscope. Using drug concentrations slightly above the minimum inhibitory level, these researchers saw visible changes within two hours. Most telling was that inhibiting each of these five principal biosynthetic activities resulted in five distinct morphological patterns. Thus, one can determine how a drug works (its mode of action) just by looking at the treated bacteria. Not bad.

An analysis of the effects of more than 40 antibacterial drugs with a known mode of action confirmed the reliability of this approach. The authors went further and measured a raft of morphological characteristics of the membrane and the nucleoids in response to drug treatments, characteristics such as area, perimeter, length, width, staining intensity—13 parameters in all. The results can be subjected to Principal Component Analysis (everyone knows what that is by now, right?) The authors call this process Bacterial Cytological Profiling or BCP. And what’s neat about it is that it can be adapted to high-throughput screening of potential drug candidates whose mode of action one wants to determine. Something similar has been done with eukaryotic cells. 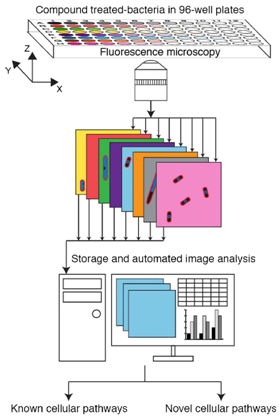 Fig. 3. High Throughput Screening byBacterial Cytological Profiling (BCP). Cultures are grown in 96-well plates with different concentrations of antibacterial compounds. At specified time points, they are transferred to a microscopic 96-well plate, and images collected using a fluorescence microscope. All stored images can be analyzed in batch using automated image analysis software and the targets identified by comparison to an existing profile database. Compounds with completely unique cellular targets will form distinct categories and will receive high priority for further analysis. The power of this analysis increases over time as more molecules with known mechanisms of action are characterized. Source.

To go into more detail, the antibiotics known to inhibit each class of biosynthesis do not all act alike. For example, protein synthesis inhibitors fall into three subclasses, DNA inhibitors into four subclasses, and so on. Is BCP is capable of distinguishing between such drug subclasses? The answer is yes, which makes it an especially powerful tool for diagnosing the mode of action of novel or uncharacterized antibiotics. Even if you had no other information about the drug, BCP would tell you how it works. And you can get this information with relatively little effort in a short time.

To evaluate this optimistic assertion, the authors conducted a double-blind assay of 18 compounds with a known mode of action. They correctly identified (or, as we may say nowadays, binned) all of them. They also assayed a novel antimicrobial drug called Spirohexenolide A, whose mode of action was not known. They determined that this drug, like nisin, works by making holes in the membrane and collapsing the proton motive force. Clearly, this approach should work well with new or uncharacterized compounds.

Knowing how a drug works is required for practical and theoretical reasons. If nothing else, the Food and Drugs Administration demands such information in order to give its approval. Drug-making companies need to know it to facilitate the search for novel drugs as well as improving existing ones. Until now, finding how an antibiotic works has been fairly hard work. One can use a direct biochemical approach, measuring the rate of synthesis of various components after addition of the drug, or a genetic one, using specified mutants that make the cells sensitive to particular drugs. All this is hard to adapt to the rapid screening of lots of compounds. To quote the authors, “BCP has many advantages over other approaches: it is faster, provides higher resolution for identifying more pathways, and can be performed in very small (microliter scale) culture volumes.”

Moselio Schaechter on December 09, 2013 at 04:00 AM in Physiology & Genetics, Teachers Corner | Permalink