Bridges Across the Periplasmic Moat 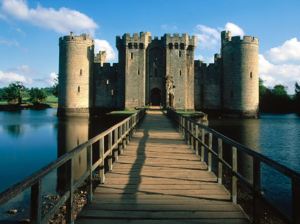 Gram-negative bacteria pose a particular challenge to any enterprising phage. First the phage is met by the outer membrane (OM)—a barrier to surmount that also can be used as a convenient handgrip for adsorption. Next hazard is the nuclease-infested periplasm with its jungle of peptidoglycan. An infecting phage genome needs protection to cross that compartment intact. For this, most tailed phages (the order Caudovirales) use the ‘long straw’ method. These phages are equipped with l-o-n-g tails for bridging the periplasmic moat. But what about the short-tailed ones such as T7?  And what about the roly-poly icosahedral phages that have no tail at all? They all have one innovative solution or another. As evidence, here are three diverse examples of delicious phage ingenuity.

Figure 2. Schematic of a T7 virion before and after ejection of the internal core proteins to extend its tail. Together gene products 16 (gp16) and 17 (gp17) actively translocate approximately the first kbp of the T7 genome across the periplasm and into the cytoplasm. Source.

The mechanism used by the short-tailed phage T7 for crossing the host’s envelope layers is to extend the length of its tail upon infection. This tactic has been intensely studied and widely reported (see here and here). In brief, each T7 virion carries tail extension proteins as an internal core that is precisely positioned adjacent to the tail portal. This core is composed of three different proteins, in quantities of ten, eight, and four respectively. Upon adsorption, these proteins exit the capsid in a specific sequence ahead of the DNA to form a tube. This added-on conduit extends T7’s basic 23 nm long tail to 40-55 nm, long enough to easily bridge the periplasm and penetrate the cell membrane (CM). These ejected proteins do more than just extend the tail. As the tail extends, they help clear a path to the CM by digesting the obstructing peptidoglycan. During genome delivery they work in concert to ratchet approximately the first kbp of the genome into the cytoplasm, then put on the brakes. The rest of the genome is then pulled in by transcribing RNA polymerase. Its work finished, the tube disassembles, resealing the punctured cell membrane as it disappears.

Figure 3. Tomographic central xy section of a representative Salmonella wt PRD1 particle with a tube possibly at initial stage of DNA ejection. The vesicle membrane and the tail tube are clearly continuous. Red arrowheads indicate the 15 nm diameter vertex aperture through which the tube protrudes; the black arrow points to the closed conical tip of the tail tube. The semicircular red line within the vesicle marks the location of the residual genome. Source.

Can you imagine a phage assembling its tail after adsorption? Two recent papers relate such stories, both complete with stunning images of the process in their phage of choice. The first observed PRD1 of Salmonella enterica var. typhimurium. PRD1 is a member of the family Tectiviridae, a group that is known for their internal lipid membranes. Its genome travels between hosts in a rather complicated virion containing 18 different proteins. Some of those proteins are localized in the unique vertex of the capsid that provides the passageway for delivery of the genome into the host. Others are components of the protein-rich internal membrane that lines the inside of the protein capsid. Adsorption to the host triggers immediate extensive alterations to that capsid. The initial conformational changes ‘decap’ the unique vertex and some of its neighboring vertices, thus opening the interior of the capsid to the aqueous environment. The resultant change in the internal osmolarity triggers dramatic morphogenesis. This restructuring is carried out by the abundant proteins within the membrane. They reassemble to form the structural framework that remolds the membrane into a 50 nm long chute initially closed at its distal end. As this growing tube protrudes through the portal of the unique vertex it digests a path through the peptidoglycan to the CM. When it reaches the cytoplasm, the tip opens to safely deliver the DNA into the cell.

The second paper discloses the economical ingenuity of the minimalist phage φX174. Its streamlined genome of 5386 nts encodes only 11 proteins. Its icosahedral capsid is correspondingly small (26 nm diameter) and simple (four different proteins). Two proteins build the capsid; two others (G and H) form the twelve prominent mushroom-shaped spikes that protrude 32 Å above the capsid and spread to a width of 70 Å.  Each spike is a pentamer of protein G with a central hydrophilic channel through its entire length, the presumed passageway for DNA being delivered into a new host. The twelve copies of Protein H in each virion are also associated with the spikes, but their precise location remains vague. It’s been known since the 1970s that protein H (the ‘pilot protein’) is essential for multiple activities early in infection, including recognition of the phage’s LPS receptor and subsequent adsorption. And unlike the other virion proteins, some copies of protein H escort the DNA into the cell. Entry of the single-stranded DNA (ssDNA) genome is linked to synthesis of the complementary strand, and some of the parental protein H remains bound to the genome, now in the double-stranded replicative form. On this basis, those researchers posited in 1975: An attractive mechanism for transit of a polyelectrolyte, such as DNA, through the lipid bilayers of the cell membranes would be a protein pore or channel. The gene H protein has significant qualifications to form such a structure.

Figure 4. The structure of the H-protein coiled-coil tube. a, Ribbon representation of the structure. The monomers are individually colored. b, Top view of the structure with the N terminus closest to the viewer. Source.

Seeking more clues as to the functions of protein H, researchers attempted to crystallize it. However, unlike the other proteins in the φX174 virion, the 328 amino acid protein H stubbornly refused to crystallize until they removed some residues from both termini. This approach rewarded them with a solved structure for the core segment (residues 143 to 282). This structure, called the H tube, is a decameric coiled coil composed of ten parallel α-helices. Each tube is a hollow cylinder or barrel 170 Å long, divided into two domains (A and B) by a kink at residues 193-194-195. Previously known coiled coil structures are typically dimers or trimers; incorporating more monomers increases the diameter of the internal channel. The authors note that may well be the first example of a decameric coiled coil. (I note: Leave it to a phage.)

This observed structure surely suggests a conduit for safe passage of the phage DNA across the periplasm. The H tube formed by full-length H proteins would be long enough; the typical distance between membranes of E. coli is 17-18 nm. The terminal regions omitted from this structure are rich in glycine and alanine, a common characteristic of transmembrane helices that suggests they serve to anchor the ends of the tube in the CM and OM. The inner channel with its minimum inside diameter of ~22 Å is also adequate for passage of two ssDNA molecules oriented in opposite directions—as would be required for delivery of the circular ssDNA genome of φX174.

And yes, these researchers also used cryoelectron tomography to look at E. coli cells early in infection. This technique revealed the presence of a tube spanning the periplasm, thereby supporting the hypothesis that the H tube forms a DNA conduit into the cell.

Figure 5. Cryoelectron micrographic tomogram of the φX174-like phage ST-1 infecting E. coli mini cells. d, The virus has attached to the outer membrane (OM). One of the pentameric spikes of an icosahedral particle has recognized a lipopolysaccharide (LPS) molecule in the outer membrane of the E. coli cell wall. e, f, After attachment, the virus extrudes a tube for DNA penetration. A tube can be seen (white arrow) crossing the periplasmic space, lodged in the outer and inner membrane (IM). g, h, After DNA has been injected into the cell, the extended tail starts to disassemble. i, Schematic model of φX174 infection. Source.

All of this is suggestive, but major questions loom. There being 12 copies of protein H in each virion, does one reside at each spike or are all twelve located at a unique vertex that is competent for DNA delivery? Protein H mutants that lack some of the “knobs” that are key to assembly of the coiled coil structure can still assemble virions, but infectivity is reduced a thousand-fold. This indicates that the ability to assemble H proteins into an H tube is required during infection, but not during virion morphogenesis, thus supporting the proposed role of the H tube during genome delivery. Another question arises because, as mentioned above, some of the parental H protein is associated with the genome after entry into the cytoplasm. The authors do not mention this, but I couldn’t help but do the math: twelve copies of protein H per virion minus ten copies in the H tube leaves a possible two copies to enter with the genome. A possibility, but we need more evidence.

While differing in mechanism, these three tactics share a common goal. Imagine, now, what gymnastics might be used by phages contending with far wider moats. For example, the current interpretation of the intracellular structure of Planctomycetes suggests a much wider gap between OM and CM (see our recent blog post here). Even more daunting, viruses infecting the extremophilic crenarchaeon Ignicoccus hospitalis must cross a moat that can be hundreds of nanometers wide. I don’t doubt that there are viruses that infect both of these organisms, but I am unaware of any studies reporting their characteristics (please correct me if I missed something here). This leaves us free for a little while longer to speculate and place our bets. I, for one, would wager only that there are unexpected twists to the story ahead.

<Postscript:  Another chapter has been added to the φX174 story. A new paper, also from the Fane lab, provides more clues about the location of the 12 copies of protein H in the φX174 virion. Still questions remain.