« On Teaching | Main | Pictures Considered #12 : How Proteomics Got Started »

How do they make it work? Genomic Revelations on a Bacterial Consortium 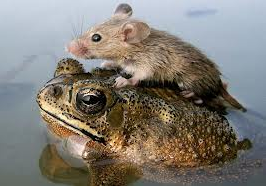 Do you ever look at a couple and wonder… ‘Why are they together? What does X see in Y. I just don’t get it.  Is X in it only for the money’?  Who doesn’t at times ponder about such matters? There’s practically an entire economy based on it. However, you didn’t find this article while waiting to check out in the grocery line. This post isn’t about celebrities; it’s about microbes.  No matter—some microbe relationships have us scratching our heads and, to the same degree, casting premature judgment. 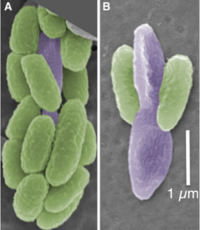 Fig. 2. Scanning electron micrographs of “Chlorochromatium aggregatum”. (A,B) Epibionts are shown in false color green, central bacteria in false color purple. (B) The central rod is dividing, and most of the epibiont cells have dissociated from the consortium. Scale bar in (B) equals 1 μm. Source.

One great example of such a conundrum is represented by the phototrophic consortium Chlorochromatium aggregatum, (this invalid name derives from an ancient era, when it was thought to be a single organism). In fact this is an unusually sophisticated prokaryotic symbiosis between a central motile heterotroph (Candidatus Symbiobacter mobilis) surrounded by multiple epibiont cells of a photoautotrophic green sulfur bacterium (Chlorobium chlorochromatii) (Figure 1). At first glance, this seems like a reasonable pairing, to combine mobility with photosynthetic autotrophy for the benefit of both organisms. Taking a deeper look at this relationship raises more questions. According to Don Bryant, "The relationship of these organisms is that of a highly dysfunctional marriage between a workaholic/nitrogen fixer/primary producer that is strictly anaerobic, and an oxygen-requiring, stressed-out, addicted soccer person that provides the bus, the driver and the GPS system.” Thus, in the microbial world as elsewhere, relationships are more complicated than they seem to be.

To gain insights as to how these organisms make this tryst work, researchers have, not surprisingly, turned to genomics for answers. In Genome Biology, Liu and co-authors report the complete genome sequences of both Chl. chlorochromatii and Ca. S. mobilis (Figure 2).  They uncovered plenty of interesting details on the intimate relationship between these two organisms. 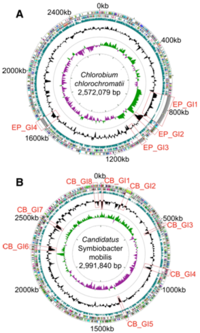 Fig. 3. Circular maps and genomic islands of the genomes of Chl. chlorochromatii (A) and “Ca. S. mobilis” (B). From outside in, the circles represent open reading frames (ORFs) on the forward strand, ORFs on the reverse strand, BLASTP scores of ORFs against reference genomes, mol% G + C, and GC skew. Colors of ORFs represent COG (clusters of orthologous groups of proteins) categories. Mol% G + C is plotted using genome averages as baselines, which are 44.3% and 59.1% for the epibiont and the central bacterium, respectively. Source.

Who Runs The Show?

Who is really in control of this consortium? Snap judgment may have you believe that the motile heterotroph has found a way to enslave photoautotrophs for a biochemical free ride.  Not so.  The genome of Chl. chlorochromatii revealed only a small number of additional genes compared to its free-living relatives. It retained the full complement of metabolism genes, consistent with the fact that it can grow in culture without Ca. S. mobilis. The opposite is not true, and a dramatically reduced genome of Ca. S. mobilis is to blame. The genome of Ca. S. mobilis is only 2.9 Mbp (compared to 4.8 – 6.8 Mbp for its closest free-living relatives) with a loss of 32% of genes encoding proteins involved in metabolism. Accordingly, the prospects for energy production in Ca. S. mobilis are grim and dependent on a variety of inputs from Chl. chlorochromatii. Biochemically speaking, Chl. chlorochromatii has the upper hand in this marriage with significant support payments to Ca. S. mobilis in the form of amino acids, sugars, vitamins, and other molecules. 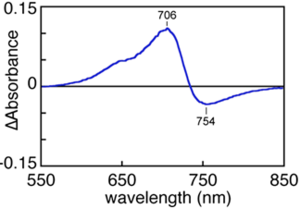 Fig. 4. Ca. S. mobilis Photosensor. Red/far-red photocycle of the bacteriophytochrome gene Cenrod_2641. The gene corresponding to Cenrod_2641 was co-expressed with heme oxygenase, which produces biliverdin (BV) from heme when expressed in E. coli. Purified Cenrod_2641 was characterized by absorbance spectroscopy before and after illumination with 700 ± 20 nm light. The (Before - After) difference spectrum is shown, with peak wavelengths indicated. Source.

Hop On, I’ll Take You Anywhere 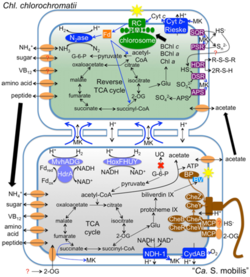 As dysfunctional as these two organisms may seem based on their distinct genomes, this odd couple can be said to be more than the sum of its parts. The bond of mutualistic symbiosis appears to be through interspecies electron transfer via quinone exchange for these organisms (Figure 4). There is no genomic evidence that Ca. S. mobilis can synthesize its own quinones, but the few energy-producing enzymes it retains use quinones as substrates. One hypothesis to reconcile this energetic enigma is that Ca. S. mobilis and Chl. chlorochromatii engage in bidirectional quinone transfer and share proton motive force. This scenario allows for greater ATP production in the central bacterium and more CO2 fixation in the epibiont. Linking the bioenergetics of these two organisms also helps explain why the navigation system of Ca. S. mobilis is so finely tuned to the photosynthetic needs of Chl. chlorochromatii.

While only one organism (Chl. chlorochromatii) in this consortium can exist as a free-living organism, the genomic data suggest the Chl. aggregatum microbial marriage is mutually beneficial for both species. As far as biological energy production is concerned, there’s no relationship more intimate than one with coupled electron transfer and a shared proton gradient. There’s no scandal here. In fact, the lessons learned from this model couple will shape the way we understand other bacterial symbioses and communities. In the words of the authors, “The degree of specialization observed for these two organisms approaches that seen in multicellular organisms." 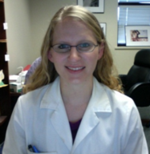 About the author: Johnna Roose is a postdoctoral fellow in the laboratory of Dr. Terry Bricker in the Department of Biological Sciences at Louisiana State University. She also writes about photosynthesis research, plant biology, and related topics at New Under the Sun Blog.