How Genetic Plunder Transformed A Microbe Into A Pink, Salt-Loving Scavenger 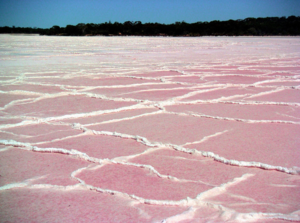 Fig. 1. The Pink Lakes in Australia are coloured pink by salt-loving microbes. Photo by Neilsphotography. Source.

We're pleased to reprint here in slightly shorted form a recent post from Lucas’  Thoughtomics, a Scientific American blog whose aim is “Exploring evolution through genes, computers and history." By kind permission.

Methanogens are the self-reliant survivalists, able to liberate energy from the most basic of molecules. A pinch of hydrogen (H2), a dash of carbon dioxide (CO2) and a spoonful of minerals is all a methanogen needs to carve out a living. This sober lifestyle has earned them the moniker of ‘rock eaters’ (lithotrophs).

Halobacteria, on the other hand, fancy their molecules ready-to-eat. They are scavengers, scrounging the salty waters for carbon compounds that they burn using oxygen (methanogens loathe oxygen). As an alternative energy supply, halobacteria are also able to harvest energy from sunlight.

Two types of microbes with radically different life strategies, yet one evolved from the other. So how did the Halobacteria cross the line?

Shijulal Nelson-Sathi thinks he has found the answer. In their latest paper, he and his colleagues show that the ancestor of all Halobacteria acquired as much as a thousand genes from a bacterium. And through this act of plunder, the microbiologists write, the Halobacteria left their methanogenic ways behind, becoming salt-loving scavengers in the process.

Picking up extra genes from other species is nigh impossible for animals like us, but for many microbes it is second nature. So when Halobacteria were first found to share some genes with some bacteria some years ago, no one batted an eyelid. Amongst the first foreign genes to be identified in the halobacterial genome were the genes that keep them afloat—literally. 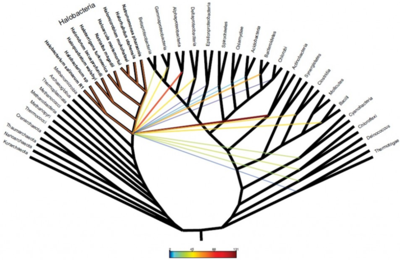 Fig. 2. The Halobacteria acquired a thousand genes from a bacterial donor. Source.

But the massive transfer of genes that Nelson-Sathi and his colleagues have now laid bare goes far beyond occasional theft. The halobacterial ancestor acquired a thousand genes in one big gulp, from a single donor microbe. The entire genome of Halobacterium contains about 2.630 protein-coding genes. Nelson-Sathi found genes for breaking down sugars among the annexed genes, as well as genes for scavenging carbon compounds, breathing oxygen and pumping ions of salt into and out of the cell. Genes, in short, for everything that make salt-loving scavengers out of Halobacteria.

Nelson-Sathi thinks the Halobacteria acquired their genes through a deep and intense cooperation with another microbe. Methanogens sometimes live and work together with other bacteria and archaea that produce hydrogen and carbon dioxide that they consume. It’s not difficult to imagine a next step, in which one of the two symbiotic partners is taken up by the other and gets stripped of its genes.

Examples of such a dramatic transformation through massive gene transfer are few and far between. In its normal mode evolution is a marathon runner, not a pole vaulter. But when it does take the jump, and microbes get mashed up, the outcomes can be wild, exciting and unique. This was the case when two microbes fused to give rise to us, the eukaryotes.

Eukaryotes can be recognized by several complex structures in their cells, such as the mitochondria that supply our cells with energy. Before they became our personal power plants, mitochondria were free-living microbes. A small amount of DNA still remains in the deepest core of mitochondria, a relic of the days they were wild and free. Most of their genes have since been scuttled from the mitochondrial genome, and ferried over to the main genome. This makes our genomes as much a mix-up of genomes as those of Halobacteria are.

So we are like the pink Halobacteria, yet different. “If similar processes underlie the origin of Halobacteria and eukaryotes,” Nelson-Sathi and his colleagues wonder, then why did eukaryotes grow large and complex, whereas Halobacteria remained small and simple? That’s because Halobacteria failed to retain their endosymbiont, the microbiologists argue, whereas we have carried our mitochondria with us to this very day.

Mitochondria supply our cells produce with vast amounts of energy. They do this by pumping protons across their inner membrane against a steep gradient, and letting them flow in again, powering a tiny molecular turbine along the way. Because this takes place within single compartments, carefully controlled by mitochondrial DNA, the entire process is immensely efficient.

Halobacteria pump protons too. But lacking mitochondria, they pump them across their own membrane into the vast and salty outside world, before they stream back in. Without dedicated compartments to play the protein pumping game, the Halobacteria have to make do with a fraction of the energy that eukaryotic mitochondria can deliver, which limits the genetic and cellular complexity they can attain.

The Halobacteria came close. If they could have coaxed their symbiotic partner to stay, these pink, little buggers could have stumbled upon the same energy-efficient solutions as our distant ancestors did. If there’s any lesson the salt-lovers can teach us, it is this one. In their pink and salty waters, they give us a rare glimpse of how our past could have unfolded, but didn’t.

Nelson-Sathi S, Dagan T, Landan G, Janssen A, Steel M, McInerney JO, Deppenmeier U, & Martin WF (2012). Acquisition of 1,000 eubacterial genes physiologically transformed a methanogen at the origin of Haloarchaea. Proceedings of the National Academy of Sciences of the United States of America, 109 (50), 20537-42 PMID: 23184964