Figure 1. This comparison of skulls from a modern human (left) and Neanderthal (right), from the Cleveland Museum of Natural History, shows the larger cranial capacity of Neanderthals. Source.

From the discovery of the first Neanderthal skull in a Belgian cave in 1826, a bone of contention among Homo sapiens has been the extent of our relationship to Homo neanderthalis, who disappeared from the fossil record ~30,000 years ago. Like scrappy cousins we'd rather not claim, we've attempted to distance ourselves and establish our clear superiority, leading at times to suspect interpretations of data. For example, Neanderthal cranial capacity was larger than ours by about 25% (1500-1800 cc, compared to 1300-1500 cc for modern humans). To an unbiased observer, this feature could imply greater intelligence among Neanderthals. However, we have often chosen to depict Neanderthals as grunting brutes whose large heads evolved to allow frequent head-butting, as well as protection from blows from each others' clubs. But history is written by the winners, and as long as bones couldn't talk, we were free to impose upon them our preferred narrative. 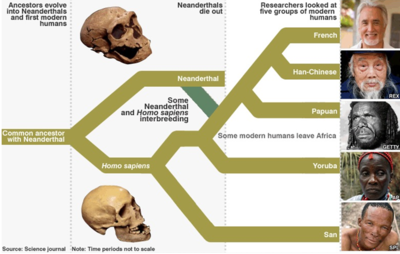 Figure 2. The subpopulation of humans that left Africa for parts of Europe and Asia encountered Neanderthals and interbred with them, resulting in Neanderthal genetic sequences in modern non-African populations. Source.

These days, however, the Genomics Age has given voice to the Stone Age, as Neanderthal DNA from 38,000 to 45,000 years ago has been successfully extracted from teeth and bone marrow, sequenced, and assembled, providing a map of the Neanderthal genome. Several findings require adjustments to the grunting brute narrative. First of all, Neanderthals share with humans the exact variant of a gene, FOXP2, that when absent in humans results in an inability to speak and process languages. This allele is not found in chimps and gorillas—our closest living relatives—and along with archeological evidence of symbolic behavior, strongly suggests that Neanderthals used language. Moreover, materials extracted from Neanderthal teeth indicate that they ate cooked vegetables. And the notion that ancient humans and Neanderthals represented separate species was dealt a blow when it was discovered that 1-4% of the genomic sequence of modern Europeans and Asians was contributed by Neanderthals, strongly suggesting that Neanderthals and the ancestors of modern humans interbred and produced fertile offspring. No separate species, they. In fact, some of the gene variants contributed by Neanderthals are thought to have aided the immune system of early humans.

The interbreeding scenario is also supported by what we know about the migration patterns of early hominids. Genome comparisons indicate that the common ancestor of Neanderthals and modern humans dates back ~800,000 years, when early hominids lived in Africa. Around 400,000 years ago, some of these early hominids spread from Africa into regions of the Middle East and Eurasia, and became the Neanderthals and their recently discovered cousins, the Denisovans. Those remaining in Africa evolved into anatomically modern humans. Then, some 100,000 years ago, a subpopulation of our human ancestors left Africa for Eurasia, encountering Neanderthals and Denisovans along the way. Perhaps the aroma of cabbage soup from a Neanderthal cave was irresistible to the females as they waited in hunger for their men, who had not yet mastered the skills necessary to hunt the northern prey, to return from yet another unsuccessful hunt. In any case, that interbreeding occurred is supported by the fact that modern Africans—descendants of the subpopulation that remained in Africa—lack the Neanderthal genes that modern Europeans and Asians acquired. 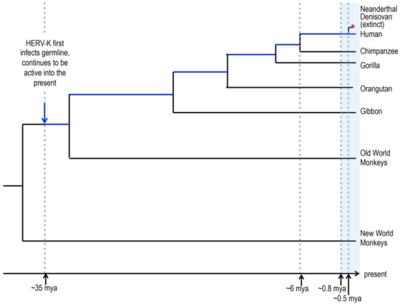 Figure 3. Retroviruses of the HERV-K(HML) group first infected the germ line of our ancestors ~35 million years ago (mya). Blue branches represent ongoing activity of HERV-K along the lineage leading to humans. The shaded rectangle designates the time required for fixation of neutral alleles, which includes the time at which Neanderthals, Denisovans, and humans diverged. Source: Author.

Considering the evidence for such close intermingling among ancient humans, Neanderthals, and Denisovans, some researchers were interested in comparing the three genomes for a special type of sequence that originates from infection with retroviruses. Retroviruses insert a DNA copy of their genome more or less randomly into host DNA as part of the infectious cycle. If integration occurs in a germ cell, such as a sperm or egg cell, and that cell is nonetheless able to produce a viable fetus, the inserted virus will reside in the DNA of every cell’s nucleus.  The sequence, known as an endogenous retrovirus (ERV), is then passed along vertically from parent to offspring, just like a gene, and can become fixed in a population. ERVs comprise 5-8% of primate genomic DNA, but the vast majority are noninfectious due to inactivating mutations that accumulate over time. Because each ERV occupies a unique genetic location, they can serve as markers to establish evolutionary relationships among different species.  They also provide a window into past retroviral infections.

The most recently active retroviruses in the human genome are all members of the group known as HERV-K(HML-2) (‘HERV’ for human ERV, ‘K’ for the tRNAlys used to prime transcription, and ‘HML’ for Human MMTV-Like, reflecting the virus’s relatedness to Mouse Mammary Tumor Virus). Viruses of this group first infected the common ancestors of primates and Old World Monkeys over 30 million years ago, and appear to have continued to circulate among our ancestors into the recent past. In fact, humans have more than 100 HERV-K insertions that chimpanzees lack, indicating that these viruses were active in the human lineage after its divergence from that of chimpanzees ~6 million years ago. Moreover, several of these sequences retain open reading frames across one or more genes, and some can even produce virus-like particles. Such evidence of recent, and perhaps ongoing, activity of HERV-K in the human population has made this group the focus of many studies looking for its possible role in various diseases. So, naturally, researchers were curious: how would Neanderthals compare with humans in terms of HERV-K insertions? What could this tell us about how recently HERV-K has been active, or about differences in immunity to HERV-K? And reaching further still... what if a HERV-K infection wiped out the Neanderthals???

So, Are We Alike Or Not?

Guided no doubt by such musings, researchers Agoni et al. examined sequence reads of ~100 base pairs that had been used to assemble the Neanderthal and Denisovan genomes. They looked specifically for virus-host junctions, where an inserted HERV-K sequence interrupts the host sequence. For each junction, they then looked at the corresponding locus in the reference human genome sequence (GRch37). Intriguingly, they found that fourteen Neanderthal or Denisovan junction sites corresponded to empty sites in the human genome. In other words, the human sequence lacked these fourteen HERV-K insertions.

The finding may have offered solace to those humans not yet ready to make room for Neanderthals in their family photo album since, in addition to the possibility that some members of HERV-K cause disease, ERVs in general have promoters and enhancers that can influence regulation of nearby host genes. Thus, these fourteen proviruses could have produced differences between ‘us’ and ‘them’ to who-knows-what an extent. Figure 4. Alleles evolving under no selective pressure can fluctuate in a population over many generations, especially when the effective population size is large. Source.

Then, population genetics drifted in...

However, another group of researchers, Marchi et al., was looking specifically at HERV-K loci that vary (i.e. are insertionally polymorphic) among humans to test for disease association. Among a set of genomic sequences from 110 individuals, they found eight of the fourteen HERV-K insertions that the first group had found only in Neanderthals and Denisovans. Furthermore, they point out that four of the remaining insertions allegedly missing in humans are in regions of the genome that are very dense with repeat elements, which are notoriously difficult to assemble, akin to assembling the featureless blue sky of a jigsaw puzzle—but harder. Due to this difficulty, ERVs that have inserted into repeat regions (comprising nearly half the genome) can end up on the cutting room floor, never making it into a genome assembly. Therefore no conclusions can be drawn regarding the presence or absence in humans of these four loci.

Marchi et al. appeal to basic population genetics to explain the discrepancy between the two groups' findings: ERVs are thought to evolve under neutral selection, drifting in the population to either fixation or elimination. The estimated time required for fixation of a neutrally evolving allele in the hominid lineage is 800,000 years (4Ne generations, where Ne is the effective population size). However, the lineage leading to Neanderthals and Denisovans diverged from that leading to humans more recently, i.e. when the subpopulation that became the Neanderthals left Africa some 400,000 years ago. As these researchers point out, the result is that many HERV-K insertions are expected to remain at fluctuating frequencies within all three populations.

The lesson here is that sample size matters greatly when tracking alleles in the murky twilight zone between the time required for fixation and the present. The reference human genome sequence that the first group searched is a composite of sequences derived from 13 people from Buffalo, New York, with 70% of the sequence derived from only one individual. It took a sample set eight and a half times larger to capture eight additional fluctuating HERV-K sites (and highlight the extent to which some of us share more DNA with Neanderthals than others).

An additional lesson from these two studies is the importance of thinking less in terms of “the” human genome and focusing more on the parts that vary among individuals. Underscoring this point, Marchi et al. emphasize that more recently inserted, polymorphic HERV-K are much more likely to retain open reading frames that produce functional proteins and contribute to pathogenesis than are older, fixed insertions, which are likely to carry numerous inactivating mutations. Therefore the HERV-K “polymorphism profiles” of individuals must be determined before any conclusions can be reached concerning the pathogenic potential of this group.

And in the meantime, think twice before making any more Neanderthal jokes. After all, the Neanderthal you mock could be mocking you back—in the mirror!

Moselio Schaechter on January 27, 2014 at 04:00 AM in Evolution, Teachers Corner, Viruses | Permalink