« Talmudic Question #105 | Main | Pictures Considered #13 : How Many Things Can Be Illustrated In One Picture? »

Adhering To The 'Replicon Model' The Sloppy Way 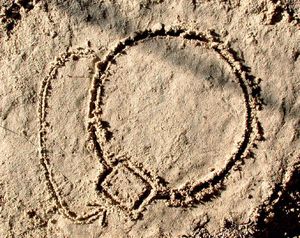 Figure 1. 'Circles in the Sand'. Source.

Sixty years ago Jacob, Brenner and Cuzin devised their 'Rep­licon Model', inspiring and useful guideline for repli­cation research ever since. According to the model, a 'Replicon' is a genetic element replicated from a single 'Replicator' – replication origin, in modern terms – and replication is triggered by a positive trans-acting factor, the 'Initiator' (see the sketch). One hallmark of the 'Rep­licon Model' was the postulation of a positive regulator: at the time of its publication gene regulation was mostly thought about in terms of negative regulation or repres­sion, inspired by the seminal lac operon paradigm.

A Matter of Language   Many bacteria have a single chromosomal replication origin, oriC, which has been identified and studied in E. coli (Gammaproteobacteria), Bacillus subtilis (Firmicutes), Caulobactder crescentus (Alphaproteobacteria), Helicobacter pylori (Epsilonproteobateria), Myco­bacterium tuberculosis and Streptomyces coelicolor (Actinobacteria), to name just some favored model organisms. The 'Initiator' in bacteria is the DnaA protein. (Almost) all sequenced bacterial genomes have dnaA genes and all DnaA proteins are homologs that belong to a distinct subclass of the AAA+ ATPases. (Almost) all bacteria employ a set of conserved replication factors for initia­tion, strand separation, priming, clamping, and discontinuous DNA synthesis. Despite this relative simplicity, the pre- and post-initiation mechanisms that ensure the 'once and only once' chromo­some replication per cell cycle turned out to be not only intricate but astonishingly variable among the cases studied. Using a metaphor one might say that with respect to replication, all bacteria speak English, using the same grammar and syntax but each branch with a rather unique local dialect in their vocabulary. Just like someone from Inverness, Florida would face problems getting along in Inverness, Scotland. 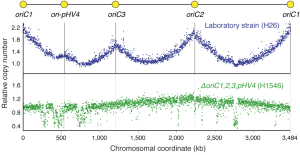 This is biology, so there are exceptions. Pseudomonas species (Gammaproteobacteria) have two functional oriCs, however they are located at a close distance to each other. Many of the insect endosymbiont bacteria with highly reduced genomes lack one or more genes of the replication machinery – including dnaA genes – and it remains to be figured out how they replicate their chro­mosomes. And there are (at least) two species of Fuso­bacteria that lack dnaA genes but have RepA-type plas­mid initiator genes, intriguingly at the chromosomal po­sition that is usually "occupied" by dnaA. So far, no gross contradictions to the 'Replicon Model'.

Sticking to the metaphor, archaea and eukarya speak French. The grammar and syntax of repli­cation – initiation, strand separation, priming, clamping, discontinuous DNA synthesis – are fairly similar to those of the bacteria. On the other hand, they use a completely different vocabulary: the factors are functional homologs of their bacterial counterparts but belong to different protein fa­milies. The chromosome of Pyrococcus abyssi (Euryarchaeota) is replicated from a single oriC, whereas three different oriCs are used to replicate the single chromosome of Sulfolobus species (Crenarchaeota). Eukaria usually have a plethora of origins along their chromosomes. But here again no gross contradictions to the 'Replicon Model'.

If One Origin Is Good, Are Several Better?   Haloferax volcanii (Euryarchaeota, Halobacteria) sports several replication origins on its main chromosome, all of which have been mapped by Thorsten Allers' lab. For the aficionados: of other genetic and physical techniques, they used the traditional minichromosome approach, that is, determining whether a presumptive origin can drive the replication of a selectable origin-less plasmid. In their present study, these researchers asked to what extent each of these multiple origins contributes to chromosome replication. To this end, they turned DNA sequencing into an analytical tool. 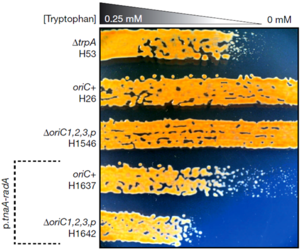 Detour: The principle here used of "counting gene co­pies" was devised early on for work confirming that bac­terial chromosome replication is sequential, that is, it starts at a site we call origin and proceeds bidirectionally to a terminus.  In 1963, Yoshikawa and Sueoka measured the number of copies of various genes in Bacillus subtilis using genetic transformation. They incidentally discov­ered that, when growing rapidly, bacteria undergo multi­fork replication to cope with the problem that cell divi­sion takes less time than replicating the chromosome.

All H. volcanii origins could thus be shown to contribute to chromosome replication albeit with differing efficacies (see Figure 2, upper part). In subsequent pairwise growth competition experiments, single origin deletion strains grew slower than the wild type parent but to some sur­prise, the deletion of two ore three origins resulted in strains that grew slightly better than the wild type! In­deed, a strain having all origins deleted grew ~7.5% bet­ter than the wild type (see Figure 3). Stranger things are happening here.

In the strain whose origins had all been deleted, Allers and coworkers did not detect novel peaks, which would have suggested that silent origins had been activated. But they noticed a wider zone of copy number enrichment in the 2,250 kb region near the rrnB ribosomal RNA operon (see Fig­ure 2, lower part). Since it is known that highly transcribed DNA is associated with elevated re­com­bination, they assumed that D-loops and R-loops in the rrnB region could facilitate the initiation of replication much the same way as entertained by phage T4 (see p. 335 in Weigel and Seitz (2006)). To confirm this, they placed the recombination gene radA under control of a tryptophan-inducible promoter. In the absence of tryptophan, when this promoter is tightly repressed, origin-less cells failed to grow, an effect rescued by the addition of tryptophan (see Figure 4). 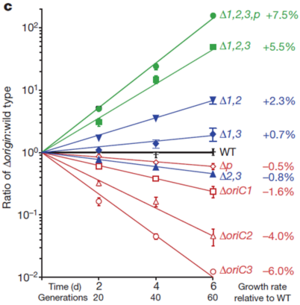 Simple It Isn’t   The observation that the rate of growth correlates inversely with the activity of remaining origins suggested to these researchers that recombination-de­pendent replication is more efficient than origin-de­pen­dent replication, but the former has a lower affinity for the replicative helicase MCM, which is rate-limiting due to its low abundance. Why then is there origin-dependent replication at all? These workers hypothesize that origin-dependent replication allows for a tighter regulation of the coordination between replication and chromosome segregation. This would be crucial in bacteria like E. coli, which under fast growth conditions need to maintain a fixed ploidy in overlapping cell cycles. H. volcanii, how­ever, is highly polyploid with ~20 chromosomes per cell, which allows for a stochastic distribution of chromo­somes to daughter cells. The authors envision the pos­sibility that an ancestral, origin-lacking H. volcanii chromosome was virtually 'hijacked' by related selfish replicons containing a replication origin and an initiator gene in close vicinity. With time, the coupling of replication to segregation evolved to ensure their propagation. This at the cost of a slight­ly reduced growth fitness as observed for the "wild type" in comparison to the origin-deletion mutants.

To come full circle: already before the onset of the new millennium, Tokio Kogoma showed that in E. coli chromosome replication is possible in sdrA mutants lacking dnaA or oriC or both. The lack of RNase H in the sdrA mutant leads to a prolonged half life of mRNA·DNA hybrids and the recom­binational repair of such structures is sufficient to sustain chromosome replication. Kogoma called this process constitutive stable DNA replication (cSDR). As was found by Hawkins et al. for H. vol­canii radA mutants lacking the origins, cSDR in E. coli is crucially dependent on the RecA recombi­nation protein. It appears that the "three Rs" (replication, repair, recombination) are nicely inter­twined mechanistically in the archaea too and ­– most likely – also in the eukarya. A final remark: the 'Replicon Model' does not preclude the existence of such intricate "backup systems".