The Fungus That Killed Darwin’s Frog

A Mouthful of Kids

Figure 1. A ‘pregnant’ male Darwin frog carries its babies in the vocal pouch (left) until they are big enough to be spat out (right). Sources here and here.

In his second expedition to South America, Darwin discovered many new species of animals and plants. The field observations obtained throughout this 5-year expedition provided the intellectual framework for the maturation of his ideas on evolution. It also introduced the world to a tiny (2-3 cm in length) frog known as Darwin’s frog. The group includes the northern (Rhinoderma rufum) and the southern (Rhinoderma darwinii) species, which inhabit the central and southern forests of Chile (and adjacent areas of Argentina), respectively. As in many other amphibians, fecundation is external. However, Darwin’s frogs do not leave the fecundated eggs on the ground and exposed to environmental insults and predators. The males scoop them with their mouths and incubate them in their vocal sac. The dedicated dads feed their offspring after the eggs hatch, producing secretions analogous to milk that allow the tadpoles to grow in a protected environment, sometimes until they have fully developed into froglets. When the young are mature enough to fend for themselves, the male frog literally spits them out. You can see a short video describing this amazing reproductive strategy following this link. This behavior, generally known as neomelia, allows the male ‘surrogates’ to care for the eggs and then the young, maximizing survival throughout the critical tadpole stage. Unfortunately, deforestation in the regions inhabited by these frogs has resulted in vast habitat losses, leaving Darwin’s frogs in precarious conditions. The last sight of a northern Darwin frog was reported in 1980, leading researchers to suspect that this particular species went extinct years ago. The species has been tagged as ‘possibly extinct’. The southern species, R. darwinii, which has traditionally occupied a much larger region, has been able to survive, but population numbers have declined dramatically. 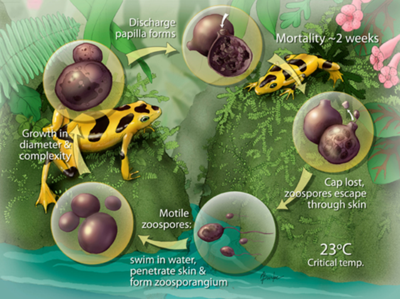 Figure 2. The life cycle of the chytrid fungus (B. dendrobatidisrecife brasil). The fungus spreads in aquatic environments as motile zoospores, which attach and germinate on the amphibian’s skin, forming sporangia and producing more spores. The spores spread and new specimens are rapidly infected. Source.

Interestingly, scientists observed that population numbers of the surviving species R. darwinii had also declined sharply in undisturbed ecosystems such as National Parks. This suggested that perhaps something else was killing the frogs. In a recent paper published in PLoS One, Soto-Azat and collaborators investigated whether the fungus Batrachochytrium dendrobatidis (or chytrid fungus) could have contributed to the enigmatic disappearance of Darwin’s frogs. This fungus causes a disease called amphibian chytidiomycosis and had previously been linked to events of population declines and mass extinctions of other amphibians all over the world. In fact, mortality rates among amphibians are so high and the disease spreads so fast that conservation specialists describe it as ‘‘the worst infectious disease ever recorded among vertebrates”. The fungus moves from host to host very rapidly in aquatic environments by means of motile zoospores. Infection is relatively unspecific, as the spores attach to keratinized tissues of the amphibian such as the mouthparts of froglets and the skin of adults. As a result, more than one hundred species of amphibians are susceptible to the disease. Once on the skin, the spores germinate and degrade the keratin layer, forming zoospore-containing sporangia deep under the skin. The infection progresses very rapidly and causes skin lesions and shedding, anorexia, lethargy, and seizures. It also appears to disrupt essential skin functions such as fluid transport and gas exchange. Unfortunately, the mechanism that allows the fungus to induce all these symptoms is not known. More puzzling is the fact that not all infected species develop all the symptoms. Some can even be asymptomatic and serve as reservoirs for the fungal pathogen. But the most susceptible species die just days post-infection and, in a few weeks, whole populations can be decimated.

The researchers did a retrospective epidemiological study to estimate the historical incidence of the infection among various species of amphibians, including the two species of Darwin’s frogs. To do so, they tested for the presence of B. dendrobatidis among 662 specimens corresponding to different species of frogs and toads archived in museums in Europe and Chile. The specimens had been collected during the last two centuries at sites known to have been or still be inhabited by Darwin’s frogs. Less than 1% of the frogs and toads examined were positive for the chytrid fungus but all the positive specimens (six in total) had been collected between 1970 and 1978, which are the times that marked the onset of population decline of Rhinoderma frogs. Furthermore, five of the six positive specimens were in fact Rhinoderma spp. Although the fixation procedures used to preserve the specimens could have degraded the fungal DNA and produced false negatives, the results of the study provided ‘forensic’ evidence for the historic presence of the pathogen at the time when Darwin’s frogs began to disappear. The results also add to the growing body of evidence suggesting that the amphibian mass mortality events caused by the chytrid fungus result from introductions of the pathogen in never-before exposed populations. 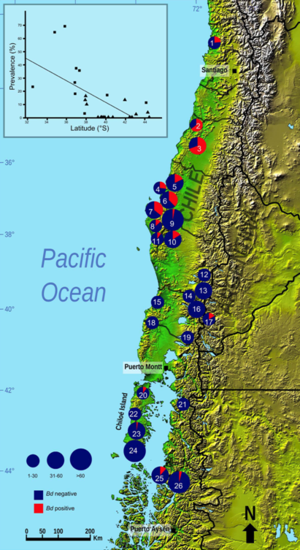 Figure 3. Correlation between the prevalence of fungal (B. dendrobatidi) infections and geographic sites in Chile and Argentina where Darwin’s frogs have disappeared or sharply declined. The circle size of each pie chart was used to represent the sample size range. Source.

The team also surveyed 26 sites across Chile and Argentina to investigate how prevalent was the fungus in the regions currently or formerly inhabited by the Darwin frogs. They could not find any specimen of R. rufum, the northern species thought to have gone extinct. They did find specimens of the southern species, R. darwinii, and were able to collect skin swabs from 369 individuals. As controls, they also tested hundreds of other amphibians from the same geographical areas (the so-called sympatric amphibians), including areas that R. rufum had inhabited before going extinct and those that still had R. darwinii presence. The field survey confirmed the widespread presence of the chytrid fungus in many of these regions and showed that the fungus was more prevalent in the northern latitudes where the extinct northern Darwin’s frog had lived. The study also showed that the chytrid fungus was more prevalent in sympatric amphibians (7.3%) than in R. darwinii (1.9%). These numbers must be interpreted cautiously. The researchers speculate, for example, that the higher prevalence of the fungus in the sympatric amphibian groups indicates that these species are less susceptible to the disease and function as reservoirs of the fungus. By contrast, the low prevalence of the fungus in R. darwinii correlates well with higher susceptibility. This is because infected individuals die rapidly and are less represented in the sample surveyed. Being a protected species, we cannot simply examine the susceptibility of R. darwinii to the pathogenic fungus in the laboratory. However, evidence suggests that it may be particularly susceptible to the pathogen, especially under conditions of stress. In 2007, for example, chytridiomycosis claimed the lives of all of 30 specimens of R. darwinii being exported to Germany. Habitat destruction, climate change, and pollution are also known to influence infection rates and could easily make the frogs more vulnerable to the disease.

The fungus may have ultimately killed the frog, but we are ultimately responsible for causing a shift in the fragile balance that controls species interactions and pathogen success. Extensive areas of native forests from the regions inhabited by the Darwin’s frog have been replaced with pine and eucalyptus plantations and/or converted into agricultural lands. These new land practices have also introduced chemicals such as pesticides and fertilizers in what used to be pristine environments. It is also very likely that humans introduced the pathogen, as the fungus can easily attach to boots and equipment. Habitat loss and human presence have been more dramatic in the northern regions, which may have increased the exposure of the northern frog variety to the fungus and cause its extinction. The northern species also releases the young from the male vocal pouch before the tadpoles have metamorphosed into froglets. This exposes the offspring to a myriad of environmental insults and predators at a still vulnerable stage in their life cycle, reducing its reproductive success compared to their southern cousins. Thus, the northern frog was already more vulnerable than the southern variety to ecosystem disruptions. Still, there is much to learn from our past mistakes... The northern species may have gone extinct but there is still hope to save the southern variety. To do this, it is important to protect the natural habitat of the frog, minimize disruptions to their natural ecosystem, and prevent the spread of the fungus. It is also critical that we develop conservation programs that reintroduce captive-bred specimens into the wild. Increasing population numbers also increases genetic variation and the chances of the frogs evolving natural mechanisms of resistance. All they need is a little help from us so they can gain strength in numbers and have a chance to win the evolutionary battle.