From Geology to Biology: A Serpentine Story of Early Life 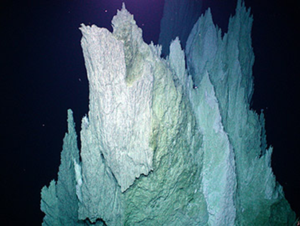 Over 4.5 billion years ago, the Earth was a superheated sphere of molten rock, radiating heat to space at over 2000 K. A billion years later, it had global oceans, teeming with microorganisms. In that time, the Earth underwent massive geological changes, somehow serendipitously creating conditions right enough to lead to the spontaneous emergence of cellular life. It has been suggested that these primitive forms of life may have originated around hydrothermal vents at the bottom of the ancient ocean, and that similar environments could host extraterrestrial life elsewhere in the solar system. Until recently, our typical picture of such hydrothermal vent systems was that of the gargantuan black smoker chimneys driven by mid-ocean ridge volcanism. Here, hyperthermophilic chemolithotrophic archaea brave the extremely hot, acidic, sulfurous waters in order to oxidize inorganic compounds released in the vent fluids. However, with the year 2000 discovery of the Lost City Hydrothermal Field and its cooler, alkaline “white smokers” (Figure 1), our view of sea-floor hydrothermal environments has begun to change. Many scientists are now turning their attention to these off-axis (some kilometers from the volcanic mid-ocean ridge) hydrothermal environments, and to their geological driving force, a process called serpentinization. Might this be the energy source for the first life on Earth and, who knows, for life elsewhere?

Serpentinization is a geological process involving reactions between water and the rocks of the lower ocean crust and upper mantle. These rocks contain minerals (olivine and pyroxene) that are thermodynamically stable at the high temperatures and pressures that prevail deep within the Earth. However, when exposed to near-surface environments, they react with water to form what is generally known as serpentinite rocks (Figure 2). The main reactions driving serpentinization are: 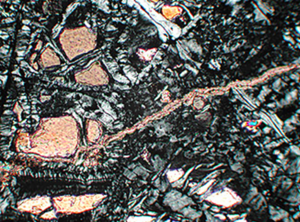 Figure 2. A photomicrograph of a serpentinite rock obtained with a polarizing petrographic microscope. The grey snake-like veins are serpentinite minerals and the light colored grains are residual, unaltered olivine minerals. The field of view is 2.5 mm. Source.

The molecular hydrogen released during serpentinization reduces sulfates and carbonates and generates hydrogen sulfide and methane. Further reactions can result in short-chain hydrocarbons, as well as formate and acetate. At temperatures below 150°C, the reactions increase the pH of the fluids (commonly to ~10) and promote the co-precipitation of Ca2+ and carbonate as calcium carbonate. The reactions are also highly exergonic, releasing heat and contributing to the circulation of the vent fluids through cracks in the rocks. The chemical alteration of rocks during serpentinization also reduces their density, increasing their volume and promoting their uplift from the parent rock materials. This is the reason why serpentinites are common in ophiolites, portions of the ocean crust uplifted onto land. Serpentinization also occurs in oceanic ridge and trench environments, where ocean crust is brought into contact with water via the tectonic processes of plate spreading and subduction. However, as demonstrated by Lost City, it can also occur several kilometers off the ridge axis. Here, heat flow is much less extreme than that in volcanic ridge environments, and conditions seem more hospitable for the emergence of cellular life.

Serpentinization has even been suggested as a possible past or ongoing process on Mars, as well as Jupiter’s moons Europa, Ganymede, and perhaps Callisto, and Saturn’s moons Titan and Enceladus, all of which show evidence for subsurface liquid water oceans. Therefore, the significance of the process to the origin of life on Earth and to life on Earth today has implications for the search for habitable (or, who knows, inhabited) extraterrestrial environments.

Serpentinization and the Origin of Life

The unifying energy strategy of all known forms of life is chemiosmosis, or the use of a proton gradient across biological membranes for energy generation. In 2010, Russell et al. published their serpentinization theory of the origin of life, which revolves around the idea of the process providing the first life with an analogous natural pH gradient across a preformed abiotic membrane. The idea is that, this way, life only had to capitalize on a preexisting arrangement rather than invent chemiosmosis on its own.

During the process of sea-floor serpentinization, the volume of the altered rocks increases, further fracturing the parent rock and releasing heat, thus promoting more water percolation. The process becomes self-sustaining, with hydrogen and vent fluids circulating continuously through the fractures for long periods of time. When they react with the cold seawater, the alkaline vent fluids precipitate as porous mineral mounds or chimneys. The pores are surrounded by semipermeable mineral membranes, which help concentrate organic secondary products of serpentinization in microcompartments, as the vent fluid moves through the honeycombed structure.

Key to the theory is that the ancient ocean was much different from our ocean today. First, it was mildly acidic (~ pH 6), and would have formed a natural pH gradient with the alkaline vent fluid (pH ~10-11) across the mineral membranes of the compartments. The gradient’s direction would have been alkaline on the inside and acidic on the outside, as in modern cells. Second, intense volcanism contributed to an abundance of dissolved metals in the acidic ocean, which would have precipitated on the chimneys, perhaps helping mediate hydrogenation and redox reactions. Russell and colleagues argue that the natural compartmentalization, pH gradient, and catalytic properties provided by the chimney pores, along with the moderate, but warm temperatures and sufficient supplies of CO2 and H2, provided the perfect environment for the emergence of primitive cellular life. Such life, they posit, may have been equivalent to biological catalysts of the abiotic methanogenesis and acetogenesis resulting from serpentinization. The primitive microbes would have harnessed the energy of the natural proton gradient to boost the exergonic reduction of CO2, making methanogenesis and/or acetogenesis the most ancient of biological metabolisms. Biology, here, becomes a mere modification of a preexisting, thermodynamically favorable abiotic process.

What Can We Say of Serpentinization-hosted Life Today?

Innovative and alluring as this theory is, it is also important to look to modern serpentinization-hosted ecosystems in our attempt to understand its importance to life. The Lost City Hydrothermal Field represents our best modern example of this type of activity, as we discussed in this blog before. Located about 20 km west of the Mid-Atlantic Ridge on the Atlantis Massif, Lost City consists of towering (up to 60 m) carbonate hydrothermal chimneys (Figure 1), through which serpentinization-derived vent fluids rise to meet the ocean. In accord with the origin of life theory, the vent fluids are alkaline (pH 9-11) and the chimneys are porous. However, modern oceans are no longer acidic, but slightly basic. Furthermore, the modern vent chimneys of Lost City are formed of carbonate and are less metal-rich than their ancient forbearers. Nevertheless, Lost City hosts abundant microbial life, which could hold valuable clues to understanding the early days of the evolution of life on Earth. 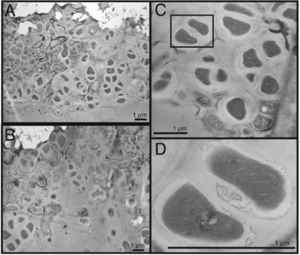 The Lost City microbes live as biofilms on the inner walls of the chimneys and are dominated by a single 16S rRNA phylotype of archaea, the so-called Lost City Methanosarcinales (LCMS). The Methanosarcinales are methanogens with a characteristic irregular coccoid or ‘sarcinal’ morphology, which is easily appreciated in transmission electron micrographs of the Lost City biofilms (Figure 3). The low phylogenetic diversity of the Lost City biofilms is surprising when you consider that it is a relatively stable ecosystem and that the chimneys are 100 years old! In 2011, Brazelton et al. confirmed the validity of the 16s rRNA data using LCMS-specific fluorescent probes (FISH technique): the LCMS cells accounted for >80% of all the biofilm cells detectable by FISH. They were indeed the dominant group! They also used stable isotope techniques to assess the ability of the biofilms to cycle methane, detecting high rates for both methane production and oxidation. Both processes were stimulated by H2, suggesting that they were not in competition but performed cooperatively. In case you were wondering, the researchers also detected a few bacteria, but the most abundant sequences were from groups involved in sulfur—rather than methane-cycling. Hence, the LCMS archaea appeared to be the major drivers of the biofilm activities. 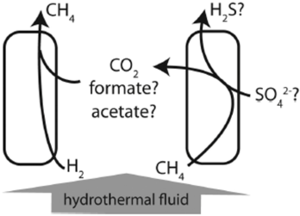 Looking closely, the micrographs of the Lost City biofilms do indeed show two cell types (Figure 3). One group of cells had the characteristic sarcinal morphology and contained stacks of intracellular membranes similar to those found in methane-consuming microbes. By contrast, the other cell type lacked the membrane structures. The parallel between the biofilm’s metabolic and morphological diversification suggests that methane cycling may involve two types of LCMS microbes, which perhaps interact syntrophically to utilize the H2 and CH4 from the vent fluids, the latter process using sulfate as the terminal electron acceptor (Figure 4). Such physiological diversification in an otherwise homogenous phylotype could be generated through lateral gene transfer. This is known to happen in other members of the Methanosarcinales, and metagenomic analyses of the LCMS biofilms did in fact reveal a high abundance and diversity of transposase sequences. The metagenomic studies also suggested that at least some of the microbes in the LCMS biofilms may use acetate as a carbon substrate in place of CO2. CO2 is relatively scarce in the Lost City fluids compared to acetate, so the ability of the biofilm cells to metabolize acetate may help alleviate the carbon-limitation that is likely to prevail in this environment. A partial nitrogenase operon and a high diversity of nifH sequences were also identified in the metagenomes, which would allow some microbes to fix N2 (likely the most abundant form of nitrogen in Lost City fluids).

Brazelton and collaborators note that the talents of the LCMS biofilms may provide insights into the early evolution of life on Earth. Unity of biochemistry strongly suggests that all life on Earth has a common ancestor, from which life diversified to fill many ecological niches. The researchers point out that such an ancestor could have inhabited a biofilm in which genes and metabolites exchanged freely, as seen at Lost City. Differentiation similar to that in the LCMS biofilms could have led to diversification from this common ancestral gene pool, thus facilitating the early evolution of life. If so, the Lost City biofilms could provide a modern analog for the study of the ancient evolutionary processes that led to the great diversity of modern life.

Not surprisingly, Lost City and other emerging serpentinization-hosted ecosystems are now the focus of numerous studies. In the future, we can expect more exciting developments and intriguing insights into the role serpentinization plays in accommodating life on a global (or perhaps even larger) scale.

Samantha is a first-year graduate student working under Dr. Douglas Bartlett at the Scripps Institution of Oceanography of the University of California at San Diego.