« Six to Tango | Main | From Geology to Biology: A Serpentine Story of Early Life »

Pictures Considered #15 : The Dynamo at Work

Why on earth would one stare – even for a few seconds – at this blurry, low-res, pixelated movie (to the right), wat­ching a jittery rod tumbling counterclockwise around its pivot? Because it's ATP synthase, a key enzyme of the energy metabolism in every living cell, that's rotating there. And when a molecule does its job by a rotational movement, well, then it takes a movie to demonstrate this. We turn thus to 'very small things considered': an enzymatically active ~530 kDa multi-subunit protein complex with a diameter of  ~9 nm and a length of ~20 nm. Biophysicists finally showed in 1997 what biochem­ists and crystallographers had suspected for quite a while but could not prove by their own experimental me­thodologies: ATP synthase – also known as FoF1-ATPase, or complex V of the respiratory chain – is a mo­lecular dy­namo. First a closer look into the screenplay for the mo­vie before peeking briefly at the bigger picture...

Noji and colleagues assembled their object of interest in three separate steps, all standard lab procedures, by 'affinity coupling' of the individual components. First, they prepared F1 particles (with the subunit composition: α3β3γ) of ATP synthase with His-tags at the N-termini of the β subunits to affix them to Ni-NTA covered microscope slides and a biotin-tag at the γ subunit. Second, to construct an actin probe conjugated to a red-orange fluorescent dye they coupled ~1 µm-rods of polymerized and biotinylated actin to rhodamine phalloidine. Lastly they coupled the biotinylated actin rods to the biotinylated γ subunits of ATP synthase via streptavidin. The whole assembly is shown schematically in Figure 2. When infused with ATP in buffer solution, a small percentage of the molecular assemblies started rotating – in all cases counterclockwise – as seen under the epifluorescence microscope and filmed for Figure 1. 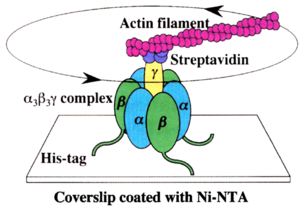 Unless you are an engineer with trained eyes, the modular design of the complete ATP synthase with its 'rotor' and 'stator' components is – at first sight – counterintuitive (figure 3). Without having seen the movie, and given that the Fo particle is embedded in the inner membrane, one would naively guess that the F1 'knob' is the rotor. However, that's not the case: the α3β3 subunits are held 'in place' by the δ subunit, which in turn is fixed in its position by the b2 subunit contributed by the Fo particle. The δb2 'stator' is attached to the α subunit of Fo. The moving part, the 'rotor', is the γ subunit which when rotating clockwise crimps the three β subunits simultaneously but slightly asymmetrically so that at any given time point, one β subunit binds ADP and Pi, the second performs the catalysis, and the third releases the newly formed ATP (Boyer 1997).

Now comes the part that is not shown in the movie: what drives clockwise rotation of the γ subunit while ATP hydrolysis – enzyme reactions work both ways – drives counterclockwise rotation? Again it's counterintuitive: in the Fo part of ATP synthase, a tight ring of c subunits is the rotor and held in place by the a subunit, which also fixes the δb2 stator. The number of c subunits in this rotor varies for ATP synthases from different species between 10 and 14 (see figure 4) and shows no correspondence to the three-fold symmetry of the 3β3 core of the F1 particle. Furthermore, the F1 γ subunit rotor is not tightly linked to one of the c subunits in the Fo particle nor does it stick to the central cavity of the c ring. The connection these two rotors probably works more like the clutch of an automatic gearbox, with the yet somewhat enigmatic ε subunit as regulator.

Rotation of the c ring is driven by the proton gradient across the membrane. The existence of such a gradient was first postulated as the 'chemiosmotic hypothesis' by Peter Mitchell in 1961 and was highly controversial at that time. Protons pass through a narrow canal formed by two neighboring c subunits and the α subunit of the Fo particle (see figure 3). This proton transport is known to involve the D61 residues of the juxtaposed c subunits and R210 of the α subunit (in E. coli). The 'handover' of a proton between two c subunits leads to small incremental movements of the c ring with respect to the a subunit, i.e. rotation of the c ring within the membrane, with the a subunit representing the stator. When during (aerobic) respiration the cytoplasm of the cell is depleted of protons, a proton gradient is established that allows protons to flow 'downhill' back into the cytoplasm through the Fo canal. This flow sets the c ring in motion, which in turn lets the F1 γ subunit rotate. The rotating  F1 γ subunit then induces the conformational alterations in the β subunits of the α3β3, that are necessary to synthesize ATP from ADP and Pi. We can calculate that it takes – depending on the c subunit stoichiometry in the c ring – between 4 and 6 protons to synthesize 1 ATP. 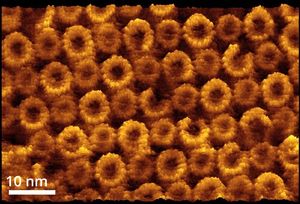 So, why is ATP synthase a 'dynamo'?

Above I emphasized that, in the experiments of Noji et al., ATP drove the counterclockwise rotation of the γ subunit within the α3β3 core of ATP synthases' F1 particle, with rare occasional clockwise 'hiccups', as the authors didn't fail to mention. They observed the conversion of chemical energy stored as ATP into the mechanical energy of rotation. In follow-up experiments, they showed that the reaction can actually be reversed (Itoh et al. 2004). For this, they prepared F1 particles as before and affixed them to a glass surface submerged in buffer medium. But now, they had attached a magnetic bead to the γ subunit so that they could rotate the bead-decorated γ subunit mechanically using magnets. Enforced clockwise rotation resulted in an increase of ATP in the medium, thereby demonstrating that ATP synthase works both ways, like a dynamo. From moment to moment, cells have to decide whether their priority is to generate more ATP or, instead, to spend ATP to accumulate more protons outside to facilitate 'symport' of other ions.

The story didn't end here. What was initially invented to demonstrate enzyme rotation was subsequently converted into a device to measure force. The ATP synthase motor produces an immense torque (turning force) for its size: in the movie, it is rotating an actin filament ~100x its own length. With 'loads' of different sizes it changed 'gears' and rotated faster or slower, which allowed exact measurement of the torque. Also it was determined that one ATP molecule was consumed or synthesized with each 120° of rotation, i.e., three per full turn (Yasuda et al. 1998). Given about 50-100 rev/sec under physiological conditions one can use 'back-of-the-envelope' calculations to estimate how many ATP synthase molecules a cell needs to meet its energy requirements. Under conditions of fast growth in rich media, E. coli cells would probably have ~5k ATP synthases distributed on its inner membrane. Indeed, when E. coli proteins are ranked by abundance, both the α (uncA) and β (uncB) subunit proteins of ATP synthase are in the top 5%. All these experiments have been done or are in progress and at the end we can expect a profound understanding of how the movement of the γ subunit modulates the catalytic center of the β subunit.

I finish with impressions from the film set, in Kazuhiko Kinosita's own words: "By that time, a crystal structure of F1 had been solved, showing that the putative rotor, the γ subunit, deeply penetrates the stator cylinder made of α3β3 subunits. The tip of the rotor was made mostly of hydrophobic residues and the portion of the stator that surrounds the tip was also hydrophobic. The oily, or waxy, residues would act as a 'molecular bearing' (Abrahams et al. 1994), strongly suggesting rotation. Both Yoshida and I were still highly suspicious, but were willing to bet on young associates. The actual bet we agreed upon, with young Noji and Yasuda, was not whether F1 would rotate. We betted upon the sense of rotation, right or left. That is the way single-molecule physiologists must adopt.” (Kinosita 2012).

You can find more movies of ATP synthetase 'at work' on the Kinosita lab homepage, and more information about ATP synthase here.

Posted on March 27, 2014 at 04:00 AM in Physiology & Genetics, Pictures Considered, Teachers Corner | Permalink

Thanks so much Christoph and Elio.