« Why Do Viruses Cause Disease? | Main | Pictures Considered #15 : The Dynamo at Work »

Something There Is That Likes Symbioses 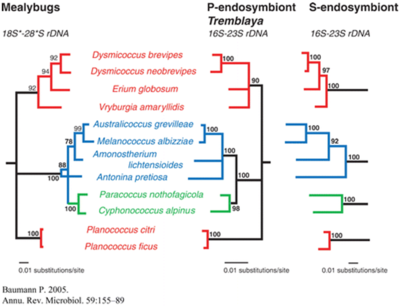 High on the list of symbiotic wonders are the sap-sucking insects (aphids, mealybugs, psyllids) and their bacterial endosymbionts. The partners appear to have evolved together and to have established a harmonious coexistence eons ago (see Fig. 1). This follows from the fact that plant sap is essentially a sugar solution, so if that’s all an insect eats, how does it get the amino acids, vitamins, and other essential nutrients it cannot make itself? The answer is from the endosymbiotic bacteria it carries within specialized cells in its abdomen called bacteriocytes. These welcome guests provide their host with many — but not always all — the missing nutrients. This theme of “feeding through symbiosis” is repeated up the evolutionary scale, culminating in our phylogenetic neighborhood with the ruminants.

Three Is Even Better 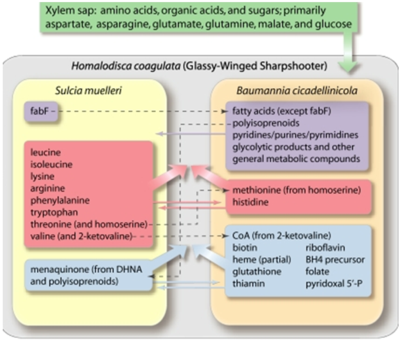 Figure 2. The complementary metabolic capabilities of Sulcia and Baumanni. The major components of xylem sap are shown in green at the top of the figure. Compounds produced by the bacterial symbionts that are needed by the host are shown with large colored arrows, and those that are hypothesized to be shared between symbionts are indicated with small colored arrows. In red: essential amino acid biosynthesis. In light blue: vitamin/cofactor biosynthesis. In purple: other metabolic functions. Gray dashed arrows indicate potential individual compounds or genes shared between the two bacterial symbionts.

In some insects, the primary endosymbiont cannot do the job alone and relies on another to help it nourish the host. In the glassy-winged sharpshooter, for example, a Bacteroidetes, Sulcia mulleri, makes ten essential amino acids for the insect, whereas a gamma-Proteobacteria, Baumania cicadellinicola, provides the remaining two plus some vitamins (see Fig. 2). One imagines much chemical crosstalk between the host and these two. We discussed this topic in this blog before (click here and here).

Even more exciting, a peek inside another insect reveals what in Spanish would be called el colmo, the height of unexpected behavior. In the citrus mealybug Planococcus citri, the two bacterial endosymbionts don't just cohabitate, one lives inside the other. An endosymbiont of an endosymbiont, or, if you wish, nested dolls in the microbial world. We discussed this subject before under the title A Bug in a Bug in a Bug, so this is an update on that story. In keeping with a venerable tradition of insect endosymbionts, these bacteria have highly reduced genomes. Perhaps counterintuitive is that the ‘host’ bacterium’s genome is smaller than that of its ‘parasite’ within. The ‘host’, Tremblaya princeps, has a puny 139 kb worth of DNA, which makes it the world champion, the genome encoding the fewest genes. On the other hand, the ‘endo-endo bacterium’, Moranella endobia, possesses a respectable 538 kb genome. The question arises, during genome reduction, what happened to the genes lost by Tremblaya? Did they end up in the nucleus, as we know happened for many genes from the ancestors of the mitochondria and plastids? It doesn’t look that way, because no genes attributable to Tremblaya are found in the insect’s genome. 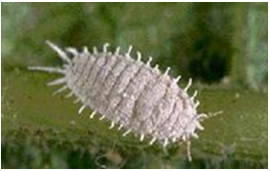 Wherever Tremblaya’s genes went, their absence leaves the bacterium crippled. Its genome is so reduced that it lacks what must be truly essential genes, such as those for the aminoacyl-RNA synthetases. How can such a cell survive? Likely, with the help of the endo-endo Moranella that might simply lyse and thus bequeath its gene products straight into the Tremblaya’s cytoplasm. There is some morphological evidence to support this notion, although the point has not yet been settled definitively. Tremblaya’s scrawny genome is even worse than first suspected. Not only is it small, but its coding capacity is 73%, which is low for any bacterium. It also has some 19 pseudogenes, a seemingly unnecessary load to carry. However, some of these pseudogenes may have functional counterparts in Moranella, so who knows. What to make of all this? A logical answer is that Tremblaya is not through undergoing evolutionary changes and could be on its way to shriveling even further. When will we start calling it an organelle? Now that’s a point that’s hotly debated. 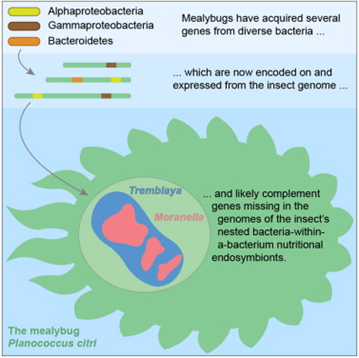 Figure 4. A Visual Summary of the paper by Husrik et al. here described.

The Russian doll arrangement suggests that the symbionts work together to provide their insect host with the needed nutrients. In fact, their functions intermingle and the biosynthetic pathways for amino acids consist of a checkered array of enzymes, some derived from one and some from the other endosymbiont. However, even this does not add up to the complete pathways as genes for certain enzymes are missing from the genomes of both bacteria. Where are they? The only other possible location is within the insect’s nucleus, and sure enough that’s where they are found. A recent paper from nine labs and four countries, no less, delves into this question. And here comes the surprise. None of these genes were derived from the symbionts. Instead, they were donated by other bacteria, surely by horizontal gene transfer (HGT). The donors include at least three species: a Bacteroidetes (responsible for 2 genes), an alpha-Proteobacteria (10 genes), and a Gamma-Proteobacteria (9 genes). Nearly a dozen of these now nuclear genes are involved in peptidoglycan recycling. Had we not known of their bacterial origin, finding them in the nucleus would have sounded weird, being that peptidoglycan is solely a bacterial product.

The total number of genomes involved to keep the mealybug bugging along comes to six (if not more): the mealybug, two endosymbionts, and three bacteria that donated genes to the mealybug nucleus. Note that such studies are not for the faint of heart because figuring out the origin of genes is not always straightforward.

Why are so many participants needed? That’s an open question. Not much of this strategic division of labor seems obligatory. For example, there is a different Tremblaya with a larger genome than the one discussed here that lacks an endosymbiont such as a Moranella. In fact, its solo performance includes all of the functions encoded by this endosymbiotic duo. 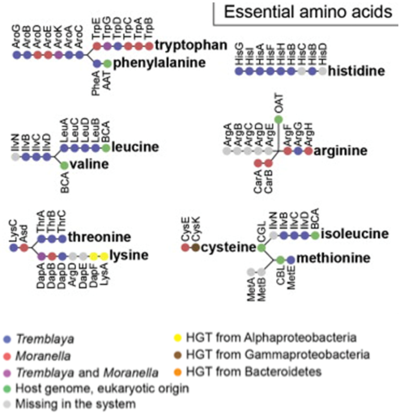 This is not the only story of promiscuous insects nabbing genes by HGT from bacteria outside their immediate ‘family’. A more recent paper from the Moran lab describes another sap-feeder, a psyllid, that also contains nuclear genes from bacteria other than its endosymbionts. Here, the endosymbiont is a Carsonella that vies with Tremblaya for the smallest known genome (158 kb). Here, too, enzymes needed for biosynthetic pathways are encoded by genes in the insect’s nucleus derived from ten different bacteria. The genes involved encode for amino acid synthesis and metabolism, rRNA methyltransferase, riboflavin and biotin synthesis, an ankyrin repeat domain protein, distinctive peptidoglycan metabolism, and others. While this list is not identical to the one in the mealybugs, the classes of metabolic categories do overlap. In addition, the endosymbiont appears to have donated one gene itself to the nucleus. Interestingly, the acquisition of Carsonella in the psyllids, roughly 150 to 200 Mya, apparently coincided with a burst of horizontal transfer of bacterial genes into the insects.

This is not the end of the story as this kind of HGT is not exclusive to symbioses between insects and bacteria. For example, I had not realized that trypanosomes have bacterial endosymbionts (Alves et al.) and, moreover, they have also acquired genes from other bacteria. Surely, these antics extend to other eukaryotes, as well, and we can expect that lots more examples will be uncovered. Already what is known is indeed startling. For earlier accounts of eukaryotic HGT reported on this blog click here for nematodes and here for a sea slug. These are telltale illustrations of the massive but somewhat under-appreciated role of symbiosis and HGT in eukaryote evolution. These processes go well beyond simple mutation/selection. They are in fact key to the origin of new species.

This topic was discussed in the Microbe World sponsored podcast This Week in Microbiology, episode No. 74.

Moselio Schaechter on March 24, 2014 at 04:00 AM in Evolution, Symbioses, Teachers Corner | Permalink