« Pictures Considered #14 : Rickettsia undergoing binary fission (from a paper authored by Elio in 1957) | Main | TWiM #74: It Came from the Siberian Permafrost »

The Bacterial Chromosome: A Physical Biologist's Apology. A Perspective.

I entered the bacterial chromosome field in 2004 as a fresh Ph.D. trained in theoretical physics. Ten years is not long enough for one to gain the depth and breadth of a scientific discipline of long history, certainly not for an early career scientist to write an essay of the status of A Mathematician’s Apology (Hardy 1940). Nevertheless, I agreed to write this Perspective as a physicist who entered biology, because my colleagues are often curious to know what drives physicists to become (physical) biologists, and make them stay in biology despite many challenges. I also wanted to share several lessons I have learned because, while some of them are personal and specific to my field, I have a good reason to believe that they might resonate with many future travelers. This Perspective is for them.

I would like to start with the story of one of the most familiar and yet mysterious forces in nature—gravity. Galileo is said to have dropped two balls of different masses from leaning Tower of Pisa in Italy some five hundred years ago. His experiment was to demonstrate that, on the contrary to Aristotle’s theory, the falling rate of the balls was independent of their mass. A modern version of this experiment was performed on the Moon by the Commander of Apollo 15 with a hammer and a feather. For a movie of this experience, click here. When released from the same height at the same time, the two falling bodies hit the surface of the Moon simultaneously! On the Earth, however, the feather would have fluttered, as if alive, because of the air.

Initially attracted to the beauty of Amsterdam, I started my post-doctoral research at AMOLF, an interdisciplinary research institute known for exciting interactions at the interface between physical and biological sciences. The forces I was interested in were much less tangible than gravity. In particular, I was supposed to explain the driving force underlying segregation of a replicating chromosome in Escherichia coli. It sounded simple to me, except that I barely knew anything about bacteria, certainly without realizing that it was one of the long-standing problems in biology. I knew the DNA biophysics literature fairly well, but when I saw the beautiful 1992 illustration of E. coli in Goodsell, it was obvious that something like the wormlike chain model was not going to be very useful to understand segregation of the whole chromosome. What worried me was the directionality—if I were a small protein sitting on a replicating chromosome, could I tell which DNA segment belongs to which sister DNA? Physicists like questions like that, whether they are rooted in physics or biology.

The first challenge I faced was something unexpected. It is the aspect of “natural history” in biology. In physics, papers are relatively straightforward to judge their validity and importance. Physicists find the biology literature much less so, and they can be taken aback when they learn that the published data they modeled are later proven wrong. It can take a long time for physicists to learn which biologists are more reliable than others and who is more careful about what they choose to say about their data. This natural history aspect of biological research is something one cannot learn from the literature, as it is more about experience than intelligence. If the physicist learns biology from another physicist, there is a danger of learning a language and culture from a non-native speaker. Alternatively, if he goes to a biology conference to learn (assuming he already knows which conference to go), typically the biology is overwhelming even for an experienced biophysicist. The best solution is to find reliable and generous biologists colleagues, who are not only willing to walk the physicist through the biology in an honest manner, but also genuinely interested in thinking about the problem from a different angle with the physicist. In this regard, I have been extremely fortunate to have worked with many generous biologists in the field, in particular, Stuart Austin, Conrad Woldringh, and Andrew Wright. 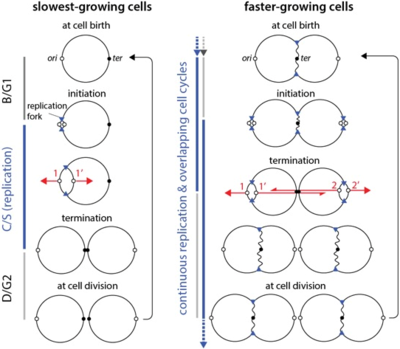 Figure 1. The spindle paradox in E. coli. At the slowest growth rates, the chromosome rests in B/G1 before the replication period C/S starts. This is as in eukaryotes, and in principle hypothetical spindles can separate the duplicating ori regions (1 and 1’) to the opposite poles of the E. coli cell (red arrows). At faster growth rates, however, replication is continuous and multiple rounds of replication cycles overlap. The illustration on the right shows four copies of duplicates Ori’s. The hypothetical spindles in this case will make the ori 1’ and ori 2 swap their positions. That is, the spindles would eventually mix the chromosomes, rather than separate them (adopted from Youngren et al. 2014).

The important biology I learned early on from Conrad Woldringh regarded the physiology and cell cycle of E. coli. Conrad was particularly fond of studies in the 1950s and 1960s, such as the ones from the Copenhagen School of Bacterial Physiology (Maaløe and Kjeldgaard, 1966). Consider, for instance, E. coli growing in nutrient rich medium, whose generation time is shorter than the duration of DNA replication. Since there must be a strict one-to-one correspondence between replication initiation and cell division (Mitchison 1971), a new round of cell cycle must start before the previous round of cell cycle is completed. Figure 1 illustrates a schematic development of overlapping cell cycles in E. coli. Why is this important? For one thing, we can entertain a gedankenexperiment about the role of hypothetical mitotic spindle in bacteria as shown in Figure 1. Under multifork replication, the hypothetical spindles that would pull two pairs of centromeres would mix the sister chromosomes, rather than separate them! From this “spindle paradox,” I learned my first scientific lesson in the bacterial chromosome. That is, to really understand chromosome segregation, one should pay attention to the global, physical properties of the chromosome itself.

The polymer model of the bacterial chromosome Bela Mulder and I proposed in 2006  (Jun and Mulder, 2006) was based on the first lesson described above. Our two main ideas were that (1) when the right physical conditions are met, polymers with excluded-volume interactions will spontaneously unmix with each other even in strongly confined space such as E. coli’s cellular volume (2) DNA will move much faster and more freely in the cytoplasmic space than inside the nucleoid, i.e., the chromosome dynamics should be considered in 3D, not in 1D. Some of the data we had modeled soon had to be updated by new data (Wang et al. 2006; Nielsen et al. 2006), but these two ideas were robust to the specific features of the data. However, an important question remained: what are the right physical conditions for spontaneous segregation? It took several years to answer the question in a series of theory papers (summarized in Jun and Wright, 2010).

The next important lesson was the result of an identity crisis. At one point after having worked out the most of the initial chromosome modeling, I saw real E. coli for the first time under the microscope in Conrad’s lab across the street. They were very tiny, and they were so alive. Watching the tiny cells swimming and tumbling with my own eyes was a humbling experience; it made me realize I had no real understanding of what is meant by living organisms. Eventually, I understood the fundamental difference between biological physics and biology, that biology in its heart is an experimental science and that, in biology, details—“prefactors” as opposed to “exponents”—really matter. I believe virtually all theoretical biophysicists go through a period of a similar crisis, and ask themselves how deep they should go into the biology. In my case, I came to a conclusion that I really wanted to understand E. coli, and it was only with a great fortune that I was given the freedom and resources to pursue my experimental ideas while a Bauer Fellow at Harvard (Pelletier et al. 2012). For any physicist readers wanting to understand the biological reality and why their biologist colleagues think the way they do, I highly recommend to ask them to admit to their lab, at least for one summer. The experience will change their view permanently. 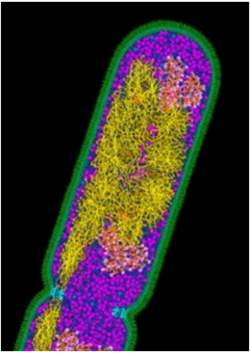 Figure 2. Illustration of the E. coli chromosomes during multifork replications based on data in Youngren et al. 2014. By David Goodsell.

I described at the beginning why the general mechanism of chromosome segregation and organization should account for all growth and cell cycle conditions, and that it must come from the chromosome itself, not from the spindles. The final and most recent lesson is indeed about the E. coli chromosome during its general, overlapping cell cycles in living cells. This is due to the heroic effort of Stuart Austin (Youngren et al. 2014). In 2006, two laboratories led by Stuart Austin and David Sherratt published important results on the organization of the E. coli chromosome under slowest-growing conditions, under which the cell cycles do not overlap (Wanget al. 2006; Nielsen et al. 2006). The two papers reported that, unlike the previous belief in the field, the left (L) and right (R) arms of the E. coli chromosome occupy each cell halves along the long-axis of the cell, such that the replicated chromosomes are organized as LRLR or LRRL. Stuart, however, did not stop there. His group started tackling what had been considered impossible. They started the measurements and analysis of intracellular positions of couple dozens of dual genomic loci markers under overlapping cell-cycle conditions. This is a daunting task because, for any given moment, every cell contains several homologous copies of each genomic locus, and deciphering the organization and dynamics of the whole chromosome based on their positional information was something that had never been done before. Nevertheless, Stuart’s group relentlessly pushed their efforts without publishing anything for several years. When the task was done, the end result was simple, elegant, and surprising. The organization of the chromosome during multifork replication was that of a simple branched donut, with the two arms of the chromosome occupying each cell halves along the radial axis of the cell. This result could not have been predicted based on our knowledge of slowest-growing cells, but it encompasses all the previously known results and move beyond them into something new and general (Youngren et al. 2014). David Goodsell has kindly updated his E. coli illustration based on the data. (Figure 2).

So what then does gravity have to do with the bacterial chromosome? I think it’s remarkable that we accept the existence of an invisible, attractive force from the Earth, even when a sheet of paper flutters or even flies away in the wind. Perhaps it’s the tangibility of gravity that helps us feel the concept. To me, physical forces intrinsic to the polymeric nature of the chromosome are as mysterious and yet tangible as gravity. Molecules, be they “air molecules” or proteins, are important in understanding the details of the motions. However, understanding the major physical driving forces, and how physics and biology have worked together during the course of evolution, will only deepen our appreciation of the role of the molecules. Recent work by Wiggins’s group shows an exemplary approach towards such a direction (Kuwada et al. 2013). As for me, I am convinced that the (in)tangible physical forces drive chromosome segregation no matter what, and physicists will continue to enter biology until one day the boundary between the two disciplines disappears.

Suckjoon is an Assistant Professor at the Department of Physics and Section of Molecular Biology in Division of Biology, University of California San Diego.