By Chance and Necessity: The Role of the Cytoskeleton in the Genesis of Eukaryotes

How did Eukaryotes Evolve from Prokaryotes? 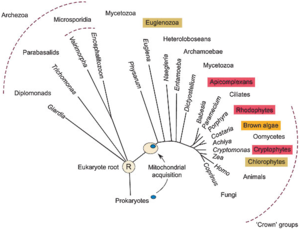 Figure 1. The mysterious root of the eukaryotic origin. Evolution of prokaryotes into eukaryotes undoubtedly involved mitochondrial acquisition, but the full details of the story are far from certain. Source.

One of the most exciting and enduring obscurities of biology lies in the early stages of the evolution of “our” eukaryotic cells (Figure 1). The endosymbiotic theory accounts well for the present existence of the mitochondrial and chloroplast organelles of eukaryotes. Although there is evidence for present day inter-bacterial endosymbiosis (also see here and here), the details of the route leading to the establishment of organelles remain enigmatic.

Even murkier is the question regarding the origin of the nucleus (Figure 2). While prokaryotic cells with organelles arguably exist and scientists have identified Planctomycetes that enclose their DNA with internal membrane continuous with the cell membrane, a truly independent membrane-bound nucleus prevails as the defining hallmark of the eukaryotes. (A recent report even calls this textbook difference into question! However, another study calls these conclusions into question.)

Unlike the clear bacterial origin of the mitochondria and chloroplast, it turns out that no single existing model has received broad acceptance to explain the existence of the nucleus. Scientists have speculated that it could have arisen from an endosymbiotic event between an archaeon and a bacterium (though who engulfed whom is also uncertain). Some have proposed that an autonomous internal gathering of cell membrane as in Planctomycetes formed the eventual independent nuclear organelle, and yet others have even suggested infection by an enveloped virus as playing a role. 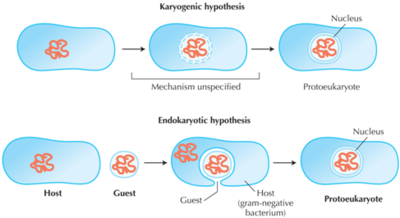 Figure 2. Two of the prevailing models for the origin of the nucleus. Source.

Not only are details on the evolution of these eukaryotic innovations (nucleus and mitochondria or chloroplast) shrouded in mystery, but just as unclear is the temporal relation between their developments. Which came first, the nucleus or the mitochondrion?

A recent online article by Ed Yong for Nautilus Magazine gives a comprehensive summary of one of the prevailing hypotheses proposed to answer that question. The general crux is that the relatively sudden marriage of two prokaryotes into one stable individual cell occurred just once in the evolutionary history of life on Earth, and that allowed the emergence of an entire new branch on the tree of life. Here, the engulfment of a bacterium by an archaeon permitted the development of mitochondria. This union augmented and expanded the metabolic and energy generation capabilities of the new organism, thereby permitting genome size expansion and organelle proliferation (compartmentalization). All this gave sudden rise to the establishment of the hugely differentiated eukaryotic lineage. 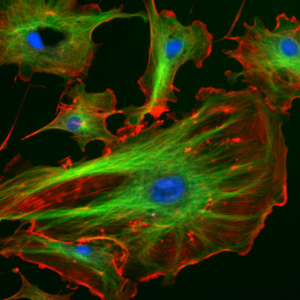 Figure 3. Labeled eukaryotic skeleton (Bovine pulmonary artery endothelial cells). Microtubules are shown in green and actin in red. DNA in the nucleus is shown in blue.

Some pieces of evidence detailed in the Nautilus article are consistent with a model where mitochondrial acquisition ‘licensed’ the genesis of eukaryotes. Yet, the jarring thing about this mitochondria-centric hypothesis is that it says nothing about the nucleus. The big problem with mitochondrial acquisition alone as the driving force of eukaryogenesis is that such a development is not a simple matter of metabolic and energy concerns. As recognized in Yong’s article, prokaryotes also largely lack eukaryotic ‘architecture’, leaving them “forever constrained in size and complexity,” an idea also discussed in an essay by Kevin Young. The mitochondrion alone is not a ready system for getting things around a cell as it increases in size and complexity. The cell would still lack the architecture and machinery to be released from the limits of simple diffusion, a significant barrier between the small prokaryotes and the (usually) larger eukaryotic cells.

In short, the mitochondria-centric hypothesis for eukaryotic genesis ignores the important uniqueness of the eukaryotic cytoskeleton (Figure 3). So, let’s take the cytoskeleton into consideration.

Why Are Prokaryotes Different from Eukaryotes?

A superb, recent essay by Julie Theriot addresses these issues with a focus on comparing eukaryotes to bacteria (not to archaea). Theriot’s essay probes deeply and meaningfully into the question of ‘why are prokaryotes and eukaryotes different’. With expertise in the cytoskeleton, her ruminations on this ‘why’ question rest on that dynamic architecture of eukaryotes that permits them to reach proportions of growth and organization rarely seen in prokaryotes.

To summarize her major points: While we now know that the cytoskeleton is present and broadly conserved across all domains of life (with diverse proteins in the actin, tubulin, and intermediate filament families), bacteria notably lack a special class of cytoskeleton-related proteins: the nucleated filament assembly factors and the motor proteins. Eukaryotes make ample use of these tools. By providing a mechanism for polarized assembly that permits motor protein directionality and inherently oriented filament growth, the eukaryotic cytoskeleton is the architectural machinery that achieves functions such as chromosome movement, vesicle and organelle transport, and endocytosis. These, in turn, help the cell attain sizes and complexities that otherwise would be unattainable. 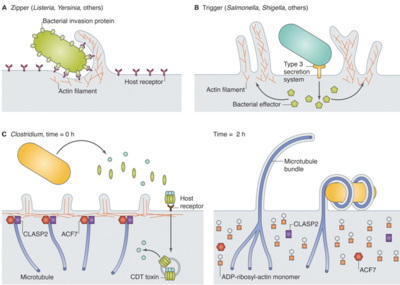 Theriot correctly points out that, in theory, bacteria are capable of making such cytoskeleton-related factors. Indeed, several pathogens contain genes for proteins that alter and control cytoskeleton assembly (e.g. here), including through nucleation (e.g. here). But bacteria export these proteins for use on the host(Figure 4), never (that we know of) for their own cytoskeleton. So why didn’t they learn to use their cytoskeletons in the same way to gain some of the benefits that the eukaryotes enjoy? Why not follow the eukaryotic route?

Possible answers to these questions receive due consideration in Theriot’s essay, but what I found most fascinating is her observation that bacteria have a trove of genes that encode different varieties of the major cytoskeleton protein families, particularly with actin homologs. It seems as though bacteria have evolved one distinct homolog for each cellular function. Eukaryotes, by contrast, mostly contain just one type of each family member, which is then specifically regulated to perform several distinct functions. Could this explain why bacteria don’t use their cytoskeleton like eukaryotes?

With Theriot’s essay and the Nautilus article in mind, I wondered whether the existing unique properties of the eukaryotic cytoskeleton could fit into models for those cryptic early steps in the evolution of eukaryotes from prokaryotes. So, let’s circle back to the question of eukaryogenesis, but now with the cytoskeleton in mind.

What if the first endosymbiotic merging that permitted the outburst of the eukaryotic lineage were not that of mitochondrial acquisition (a bacterium engulfed by an archaeon), but rather the reverse, something more akin to what has been considered a possible origin of the nucleus, the engulfment of an archaeon by a bacterium.

Theriot’s essay avoids discussion of archaea, perhaps because we know precious little about them. In visual appearance, archaea and bacteria are look-alikes, but archaea contain genetic and mechanistic facets that are both bacteria-like and eukaryote-like. The cytoskeletons of archaea are similarly mixed: while many encode bacterial components such as ftsZ, their overall cytoskeleton composition is closer to the eukaryotes’. Crenactin, for instance, is phylogenetically nearest to canonical actin rather than to the myriad actin homologs found in bacteria. We don’t know enough about archaeal cytoskeleton control yet to figure out if they have nucleated assembly factors, motor proteins, or any of the other unique properties of the eukaryotic cytoskeleton. But given the presence of other rudimentary eukaryotic systems in archaea, such as ubiquitination, it's reasonable to hypothesize that some archaea may employ and control their cytoskeletal architecture in ways closer to those of eukaryotes.

So then, imagine if a bacterium with its cytoskeleton composed of multiple, monofunctional actin/tubulins were to engulf an archaeon with a relatively simpler cytoskeleton consisting of a single member of the actin and tubulin families each. Were the engulfed archaeon capable of growth and further replication within its new host, some cells would die with time, leaking archaeal contents into the bacterial host cytoplasm. I propose that this could include ‘eukaryotic-like’ cytoskeletal proteins and regulatory system components like proto-motor proteins and nucleation factors.

The presence in the same bacterium of multiple actin and tubulin homologs carries the risk of cross talk between the regulator and those homologs. If so, this may preclude or at least discourage the evolution of task-specific regulators that affect assembly like nucleation proteins, or factors like motor proteins. Thus, if the cell needs to nucleate one actin homolog involved in plasmid segregation, it may not want to have to nucleate the other actin homolog, e.g. one involved in maintaining cell shape. Unique factors would then need to evolve for each cytoskeleton homolog, a demanding task. On the other hand, the ‘single member’ system of the archaea may allow for the innovation of these kinds of regulatory systems. They could comprise a small set of regulators whose activity can be modulated depending on where and when they’re needed. Inside their bacterial host, these archaeal regulatory factors are now free to act via crosstalk on the bacterial homologs.

This potential for disastrous cross-talk of a single regulator on different homologous cytoskeleton family members in a single cell would also explain why several bacterial species appear perfectly capable of evolving eukaryotic-like cytoskeleton control for export during pathogenesis (in trans), yet eschew adoption of such systems in cis. Their relatively broad repertoire of highly similar cytoskeletal components simply makes it too risky a proposition. 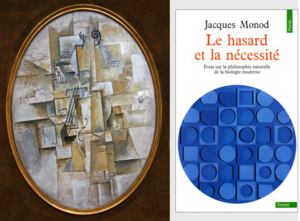 Figure 5. (Left) Pablo Picasso’s Violon (Violin) 1911-12, Kröller-Müller Museum, Netherlands. Just as the audience’s image of a violin is destroyed through deconstruction within the oval frame to achieve Picasso’s art, so too may a bacterial cytoskeleton have been disrupted under the influence of archaeal-evolved factors following endosymbiosis. (Right) Chance and Necessity by Jacques Monod. Borrowing Monod’s title, the chance merging of two distinct systems for cytoskeletal regulation may, by necessity, have influenced eukaryogenesis.

The Picasso quote that titles this section could be equally apt for this proposed version of eukaryogenesis (Figure 5, left). To summarize and repeat: The chance mixing of two distinct modes of cytoskeleton regulation in merged organisms (one with many similar members with unique functions and the other with single members with broad functions) would potentially result in a war for control. Because of regulatory crosstalk, one system would need to eventually win out. Perhaps the products of the endobacterial archaeal genome interfered with, and ultimately destroyed, the bacterial cytoskeletal system, creating a novel one in its place.

An archaeal cytoskeleton with rudiments of nucleation and motor proteins, but now within a bacterium with its own unique genes for metabolism, creates a novel organism with the architectural system needed for further evolution. This could include the compartmentalization of a newly merged genome under the control of an archaeal-derived cytoskeleton. With the acquisition of energy-generating organelles and further compartmentalization, larger physical dimensions and a bigger genome size could be attained. More stable, these early eukaryotes would displace any amitochondrial species and, with a finer tuning of their cytoskeleton, develop more innovations.

According to this model I’m proposing, the key event in the eukaryogenesis is, to reference Monod (Figure 5, right), the chance merging of two systems by the necessity of regulatory cross-talk gaining dominant control over homologs of the other system. Above all, such a model predicts that we should be able to find existing archaea with genes that encode nucleation factors and/or motor proteins used to control the functions of its own cytoskeleton. To my knowledge they have not yet been found, but I don’t think that we’ve looked particularly hard either.

Are there problems with this line of thinking? Are there other considerations? Most importantly, what kind of experiments do you think would currently be possible to address these speculative models? The mystery of eukaryogenesis still has a lot of questions, and like with many things in science, I don’t think that our curiosity will soon be satisfied.