« TWiM #76: Genetic Biopixels and a Pathogenic Sweet Tooth | Main | The Tale of a Tubeworm and a Biofilm » 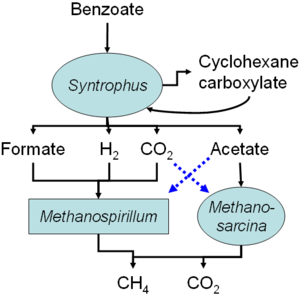 Figure 1. An example of syntrophy. Here, benzoate degradation is carried out by a model syntrophic consortium. Dashed blues lines indicate additional sources of cell carbon for the methanogens. Source.

Syntrophy or “eating together” is a kind of symbiosis widespread in biology and of great importance for key biochemical transactions on this planet. Indeed, the cycling of carbon in many of its aspects depends on microbial syntrophy. Thus, the breakdown of waste material critically depends on chemical modifications brought about by microbial syntrophic associations. The phenomenon basically, requires reverse electron transfer, i. e., the input of energy to drive critical redox reactions.

The term syntrophy was first used in microbiology to describe the association between chemotrophic sulfate reducing and phototrophic sulfur oxidizing bacteria. Syntrophy exists between two species of bacteria, two of archaea, or one of each. Lucky for us, a fine essay on this subject was written a few years ago by McInerney, Sieber, and Gunsalus. A later, more detailed review by the same authors is found here, and by others here as well. You will encounter a large variety of fascinating syntrophic associations as well as learning of the ingenious ways that microbes have evolved to squeeze out the last drop of energy from thermodynamically unfavorable reactions. A classic example of symbiotic syntrophy involves an archaeon that can convert methane into CO2 and hydrogen by virtue of a sulfate-reducing bacterium siphoning off the hydrogen byoxidizing into into H2S. And more complex systems abound. For instance, in a tripartite relationship, bacteria in anaerobic environments degrade polymers into acetate, long chain fatty acids, and other compounds, other microbes convert these into hydrogen, formate, and acetate, and a third group use these to make methane and CO2.

The authors pose the question of how do syntrophic cell partners communicate? The answers are not obvious and require further investigation. But a great deal is known already. In the authors’ words: “Genomic analysis has revealed the genetic blueprints of model syntrophic substrate-utilizing microorganisms, which in turn has provided insights into the metabolic pathways operative for carbon and electron flow to the end products acetate, hydrogen, and formate. The emerging bio- chemical paradigm includes the need for reverse electron transfer via membrane-bound as well as cytoplasmic confurcation-type enzymes that dispose of electrons as hydrogen and/or formate. Syntrophic strategies truly exist at the thermodynamic limits of life."