The Min System: All the Places You’ll Go! 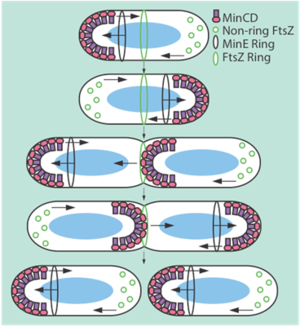 Figure 1. Min oscillation in E. coli. The nucleoid is shown as a blue oval. Source.

Most bacteria divide quite precisely and their daughter cells are often the same size. The reason for this accuracy is not really known, but it must be important because it is such a frequent phenomenon. This requires good measuring sticks, systems that calculate distance from the ends and restrict the formation of the division site to the middle of a dividing cell. In Escherichia coli, two systems are known to help contribute to midcell positioning of the division machinery: nucleoid occlusion, which prevents the scaffold protein FtsZ from forming rings over nucleoids, and the Min system. Even with the help of these mechanisms, the question of how a bacterium finds its center so precisely is still enigmatic. 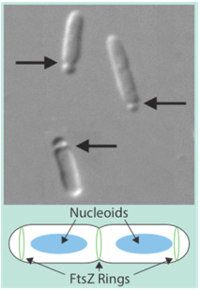 The Min system is named for the phenotype of cells when it is disrupted. In cells that lack Min proteins, FtsZ forms rings at all nucleoid free regions in the cell, including at the cell poles. This results in divisions occurring either at midcell or at cell poles, creating “minicells” that lack nucleoids and longer, nucleated cells. E. coli contains an array of three Min proteins, MinC, MinD, and MinE that self-organize to oscillate back and forth between the ends of the cells to prevent FtsZ from forming rings at cell poles. This is how it works: MinC inhibits the assembly of FtsZ into rings. MinC is recruited to the membrane by MinD, which itself binds the membrane as an ATP-containing dimer. Further, MinE forms a membrane-bound ring that moves toward complexes of MinC-MinD and in the process displaces MinC from MinD. It also stimulates the ATPase activity of MinD, causes it to dissociate from the membrane, and to move toward the opposite pole. MinE can remain on the membrane to remove additional complexes, or dissociate from the membrane along with MinD to cycle to the opposite pole. The oscillation of this system keeps the concentration of MinC highest at cell poles and lowest at midcell, allowing FtsZ ring formation at their normal site at midcell. Over the years, several patterns of Min oscillation have been observed that differ from the normal pole-to-pole pattern of wild-type cells. These patterns emerge in short, long, and even branched cells and have inspired the development of computational models to predict the pattern of Min system oscillation under various conditions. 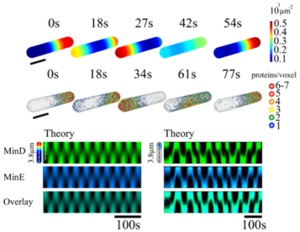 Figure 3. Computational models of Min oscillation in a cell of normal length (3.8 µm).  The top model is a deterministic system and the bottom model is a stochastic system. Below are kymographs corresponding to the position of the proteins over time. Source.

Several computational models have been produced over the past decade to better understand the dynamic Min system. These models are based on experimental data and allow estimation of how the system would change under a variety of conditions. They can then be confirmed by further experiments. As in other fields, two types of models can often be created in biology: deterministic and stochastic.In deterministic models, the state of the system is defined by the density of proteins and their change over time.  In stochastic models the state of the system is defined by the position of individual molecules and the location of these molecules is determined probabilistically. Previous models have incorporated the idea that Min protein oscillation occurs due to dynamic instability, meaning that a homogeneous cellular distribution of Min proteins is unstable. These models have considered the cooperative membrane binding of MinD and the activity of MinE to remove MinD from the membrane.

Recently, Bon ny et al. proposed and tested an updated model that accounts for the ability of MinE to form complexes with MinD, bind the membrane, and either leave the membrane with MinD or remain bound. This model does not include MinC, which, for this consideration, is simply along for the ride. It also only considers MinD dimers, dimerization being required for membrane binding. For this model, equations representing reaction schemes that consider protein concentration, diffusion rates, and membrane binding/dissociation of MinD and MinE were solved for a cylindrical domain with hemispherical caps, a proxy for the shape of an E. coli cell.

These computational models confirm patterns that were previously observed both in vivo and in vitro and accurately predict two additional patterns. Simulations for a typical sized E. coli cell are shown in Figure 3. Both the deterministic and stochastic models show a standing wave pattern of Min oscillation consistent with previous observations. This pattern describes Min proteins that bind the membrane at one pole, are removed, and travel through the cytoplasm to bind the membrane at the opposite pole. This standing wave pattern, also commonly referred to as pole-to-pole oscillation, will occur in cells that are less than or equal to 5 micrometers in length, roughly the size of a typical E. coli cell. How does the Min system behave when cells are elongated and/or the Min protein concentration increases? 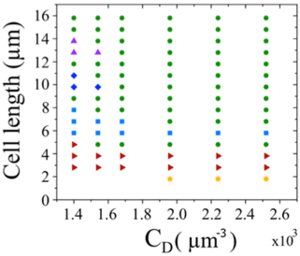 To answer this question, the authors present a phase diagram (Fig. 4) that shows how the components of the Min system vary as a function of total MinD concentration and cell length, while keeping a constant MinD:MinE ratio. In this diagram, red triangles represent pole-to-pole oscillations observed in cells of normal length. Green circles represent traveling waves that have been observed in longer cells and with increasing MinD concentration. In a traveling wave state, Min proteins assemble at one pole and travel through the membrane to the opposite pole where they detach from the membrane and travel through the cytoplasm back to the original pole. Both of these oscillation patterns contain one node (the center of the oscillating wave). Light blue squares represent standing waves with two nodes. This pattern is observed when a cell is elongated prior to division and a single Min oscillation (one node) becomes two Min oscillations (two nodes), one in each daughter cell. Yellow pentagons represent spatially heterogeneous steady states observed in short cells. In short cells with higher MinD concentrations, Min proteins do not oscillate, but instead switch stochastically from pole to pole. Dark blue diamonds and purple triangles represent standing waves with three and four nodes, respectively. These additional nodes appear as the cell length increases when the concentration of MinD is low.

Overall, as the length of cells increase when the concentration of MinD is low, a single Min oscillation will become multiple Min oscillations (one to four nodes). As the concentration of MinD is increased, cells of normal length retain pole-to-pole oscillation, longer cells mostly exhibit a traveling wave pattern, and short cells lose an oscillation pattern. Min proteins have been shown to self-organize into a wave pattern in vitro on supported lipid bilayers and this pattern was also predicted using the computational model.

The model concludes that the membrane binding of MinE is an essential component when describing different Min patterns formed based on protein concentration and cell morphology. This model comprehensively describes Min patterns observed in vivo and in vitro and brings us closer to better understanding the behavior of Min proteins, which should emerge from additional studies of the molecular details of the Min proteins. The addition of the membrane dynamics of MinE to computational models is indeed “MinD” boggling as new patterns of localization emerge, highlighting the complexity of the Min system. This model can be used to design new in vivo or in vitro experiments. Also, this work can contribute to the field of synthetic biology in pursuit of synthesizing what is minimally required for a bacterial cell. Additional experimentation is necessary to further refine the model of Min oscillation, but it is exciting to see that computational models have accurately predicted patterns of Min localization that occur in vivo and in vitro on supported lipid bilayers.

Min systems and other regulators of FtsZ in diverse bacterial species

Several species of bacteria contain homologs of Min proteins, but some bacterial Min systems behave differently from that of E. coli. For example, the well-studied Gram-positive bacterium Bacillus subtilis has homologs to MinC and MinD, but lacks MinE. In this system, MinC and MinD are tethered to both cell poles to prevent FtsZ ring formation at newly formed cell poles without the need for oscillations. The Gram-negative bacterium Helicobacter pylori contains homologs of MinD and MinE, but lacks MinC and has less precise FtsZ ring placement than E. coli, indicating that Min proteins likely have a different function in this species.

Other species such as Mycobacterium tuberculosis lack Min homologs. M. tuberculosis has a very slow doubling time when compared with E. coli (~15 hours vs. 20 minutes), divides asymmetrically, and sister cells differ in length. Caulobacter crescentus lacks Min homologs, but contains a negative regulator of FtsZ, MipZ, which forms a gradient to restrict FtsZ ring formation to midcell. In other species there are also positive regulators of FtsZ ring formation that localize to midcell and recruit FtsZ to that site. These include SsgA and SsgB of Streptomyces coelicolor and PomZ of Myxococcus xanthus.

Why do different species have different systems to regulate FtsZ ring formation? It is likely that bacteria use systems that are “good enough” for them to thrive in their respective environments. Since E. coli is found in the nutrient rich colon, it may be that it can afford to use more energy for this expensive oscillating system. However, there may be more variations on these themes. In addition to the known positive and negative regulators of FtsZ, it is likely that additional factors have yet to be identified. As the model of Min system oscillation and other regulators of FtsZ ring placement continue to be refined and investigated, we should better understand how bacteria identify their cell center for division. And you thought this was a simple question…