The Oldest Gem Tells its Tale 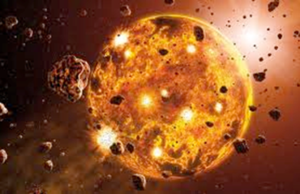 Figure 1. The dramatic beginnings of Earth as a molten planet bombarded by asteroids and meteors. Source.

Modern Earth is nothing like it was in its early days. Our planet was formed some 4.56 billion years ago when a giant stellar cloud collapsed on itself due its massive size and gravitational force. The explosion also generated the sun and many other planetary bodies, including those that would eventually become the planets of the Solar system. This early Earth was a planet of molten rock surrounded by a layer of hydrogen and helium gases. These gases were likely blown away by the intense solar wind, leaving the planet without a protective atmosphere and making it more vulnerable to bombardment by asteroids and meteorites. At this time, it had a moon called Theia, which some theories believed collided with the Earth with such force that it tilted the planet and made the moon. The impact is also believed to have stimulated the circulation of magma, intensifying volcanic activity in what was already a very inhospitable planet. Not surprisingly, this early era in Earth’s history is called the Hadean (Hell-like) eon. These were indeed hellish conditions that prevented the emergence of life. Yet the Earth began to cool down and, at some point, a thin, but stable continental crust was formed. These ‘milder’ conditions also promoted the condensation of water released through the outgassing of volcanoes. And so a primitive ocean was formed. The volcanic outgassing also released gases such as ammonia, carbon dioxide, and methane and created a primitive atmosphere that helped protect the planet from meteorite bombardment and radiation. It may have been a rocky beginning, but once the planet cooled down enough to form continents and oceans, it was ready to harbor life. 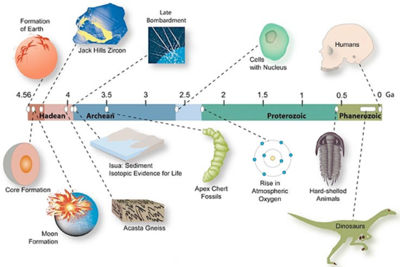 Figure 2. Timeline showing the formation of Earth some 4.56 billion years ago and some major geological and biological events in the history of our planet. The Jack Hills zircon rock dates back to the time when the Earth was in its early stages of evolution, after the moon was formed. (Image credit: Andree Valley). Source.

Dating the emergence of life on Earth is a daunting task. We can date when life was already thriving based on the age of microfossils, i.e., mineralized structures whose size, shape, and chemical composition matched those of modern microbes. But even these ‘proofs’ can be misleading. In the 1980s, for example, scientists discovered 3.5-billion-year-old mineralized filamentous structures in the Apex Chert formation in western Australia, which were strikingly similar to cyanobacteria. The ‘microfossils’ were later shown to be inorganic mineral formations. So far, the oldest microfossils may be the carbonaceous spheroidal microstructures of the Moodies Group in South Africa (3.2 billion years old) and microfossils from the Strelley Pool Formation in Western Australia, which are believed to represent 3.4-billion-year-old sulphur-metabolizing cells. Hence, the microfossil data supports the notion that life was already thriving in the mid-Archaean eon. But how far back in time does life go?

In the absence of microfossils, scientists are focusing on geological evidence to ascertain the time when the continents and oceans formed to mark the time when planetary conditions could have supported the most primitive forms of life. Isotopic evidence from the Isua Greenstone Belt in Greenland suggests that the planet had liquid water 3.8 billion years ago, early in the Archean eon. However, the geological record, in the form of an ancient rocky formation in the Canadian Artic called Acasta Gneiss, suggests that a continental crust already existed approximately 4 billion years ago. The formation of this continental crust depended on conditions that would have also favored the formation of oceans and the emergence of life. Hence, it is also possible that life originated in the Hadean eon.

There is also geological evidence that ‘soon’ (100 million years!) after the formation of the Acasta Gneiss rocks the Earth was heavily bombarded with asteroids (the so-called ‘late bombardment’ or ‘late heavy bombardment’). This was a major cataclysm that many believed melted the Earth again and sterilized it. Hence, many argue that, if life had emerged in the Hadean period, it would have been wiped off from the planet. Modern life, then, would have evolved from Archean ancestors. Yet a planet-wide sterilization would have required the Earth to melt completely. If so, ancient rock formations such as the Acasta Gneiss, which predates the cataclysm, would have melted as well. A more likely scenario is that only parts of the planet were impacted by the bombardment and that melting was local, rather than global. This would have allowed for the preservation of at least part of the Hadean continental crust and biosphere. These survivors would have withstood the high temperatures and acidity of the Hadean ocean. Volcanic activity may have also been very intense at the bottom of the oceans during this time, releasing iron into the hot ocean sediments. But iron, hot temperatures, and acidic waters are conditions that we know sustain the growth of some heat-loving (hyperthermophilic) microbes around modern hydrothermal vents at the bottom of the oceans. Thus, microbial life under such extreme conditions is possible. In fact, these primitive microbial activities based on iron respiration at hot temperatures may have also contributed to the formation of ancient rocks known as banded-iron formations some 3.8 billion years ago. So it is indeed very possible that microbial life is much older than we are taught in school and may in fact date back to the Hadean eon.

The gem of all rocks 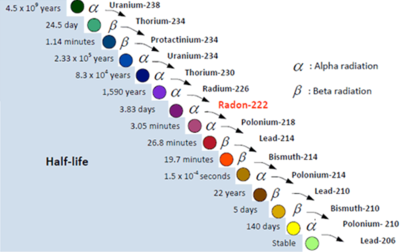 Figure 3. The decay chain of uranium and thorium inside the Jack Hills zircons allowed scientists to date the crystal’s formation to 4.2 billion years ago. Source.

A Hadean origin of life relies heavily on geological evidence dating the time in Earth’s history when continents and oceans formed. To investigate this, geologists focused their studies on the ancient Jack Hills rock formation in Western Australia, which is believed to harbor some of the oldest rocks on Earth. This site contains zircons, a type of zirconium silicate crystals that are durable and resilient to the passage of times. Zircons contain uranium (U) and thorium (Th), which decay radioactively within the crystal. This generates internal radiation and changes the crystal’s structure, color, and density over time. Most importantly, the progressive radioactive decay of these elements generates new elements in defined, sequential steps, each taking a precise amount of time. For example 238U, the most abundant U isotope, has a half-life of 4.5 billion years, i.e., it would take all this time for half of the U in the zircons to decay to the next element in the decay chain, 234Th. Once  thorium is formed, it takes only 24.5 days for half of it to decay to 234Pa and just a little over 1 minute to generate 234U. The chain reaction continues through various elements until the formation of a non-radioactive, stable element (206Pb), which ends the decay chain. Similarly, the more rare 235U isotope decays through a chain of elements to form 207Pb. Hence, by measuring the amount of U and Th and their decay products of U and Th, in particular the radiogenic lead isotopes (207Pb and 206Pb), geologists can precisely date the age of zircon. 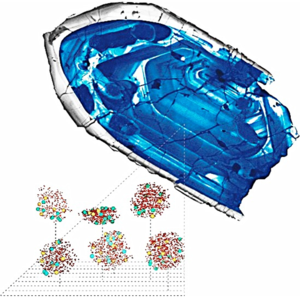 Figure 4. Nanoscale analyses of the 207Pb/206Pb ratios by atom-probe tomography identified Pb clusters in specific atomic arrangements expected from the natural radioactive decay of U and Th within the crystal. This helped rule out any bias of the measurement of 207Pb/206Pb ratios due to lead mobility and provided solid evidence that the crystal was 4.4 billion year old! (credit: John Valley, University of Wisconsin). Source.

In 2001, an international team of scientists performed radiometric studies on several spots on a new zircon crystal from the Jack Hills site. The results varied with the spot analyzed but all established that the crystal was between 4.2 and 4.35 billion years old! Furthermore, the oxygen isotopic analyses in the zircon were within the ranges expected for a rock that was formed when magma was suddenly cooled upon interacting with water. Hence, these results suggested that a stable continental crust and oceans might have already existed early on in the Hadean eon. Perhaps not unexpectedly, these provocative studies, which were published in Nature, generated a lot of controversy. Many questioned the reliability of the radiometric assays, based on the fact that little is known about how the internal radiation generated inside the zircon affects its structure and the mobility of the radiogenic lead isotopes. Fractures in the crystal could, for example, concentrate the lead isotopes in defined spots and give artifactually high estimates of abundance. After more than a decade, some of the same authors published a new study, this time in Nature Geoscience, which put the controversy to rest. This time the team used a powerful technique called atom-probe tomography to simultaneously identify, quantity, and map the atomic position of the radioactive elements and decay products and any other elements that could have migrated inside the crystal and ‘contaminate’ the sample. The specific arrangement of the radiogenic Pb atoms allowed the scientists to differentiate spots where they had concentrated due to migration from those directly produced from the decay of the internal, native U and Th elements. The Pb nanoclusters formed by internal radioactive decay had 207Pb/206Pb ratios corresponding to ages up to 4.4 billion years old! That’s ‘just’ 160 million years after the Earth was formed and soon after the formation of the moon. 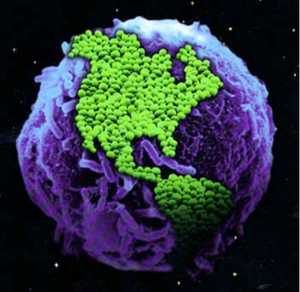 Figure 5. A planet of microbes. Source.

Not so hellish after all

The Jack Hills zircon tells an amazing tale about the evolution of early Earth. It tells us that the planet had cooled enough to form a continental crust not that long (160 millions) after its formation. In this short period of time, the planet transitioned from being a ball of magma (as depicted in Fig. 1) to a planet with continental crust and a hydrosphere. It also had the moon,was already tilted, and had both a magnetic field and an atmosphere. It was still hot, the ocean was acidic, and the atmosphere saturated with toxic gases, that’s for sure. But these conditions, as hellish as they may sound, could have supported the emergence of life. As a microbiologist, I am mesmerized by the fact that life may in fact be almost as old as the Earth itself (a ‘few’ -one or two hundred- million years, give and take ;o). Perhaps most important is the fact that the Earth and microbes have been companions for such a long time. This partnership has been a major catalyst in our planet’s transformation from a ball of magma to the green and blue planet of today. Without them, we, humans, would not have existed. Without them, we will not be here tomorrow. And that’s what’s most beautiful about the gem’s tale.