« Of Terms in Biology: Syntrophy | Main | Pictures Considered #16 : Who Produced The First Ultrathin Section of Bacteria? »

The Tale of a Tubeworm and a Biofilm 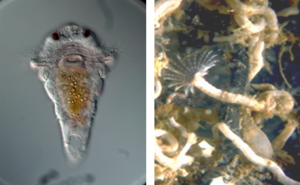 The oceans of our world harbor an incredible diversity of life, the vast majority of which has yet to be observed or characterized. This is part of what makes the study of marine biology so exciting; there is, in essence, an endless sea of new and exciting underwater discoveries to be made. When a biologist thinks of the creatures that inhabit our oceans, one of the prominent examples that often comes to mind is the tubeworm, a metazoan with a characteristic tube-like outer shell. The most likely image one thinks of is of the giant chemosynthetic tubeworms inhabiting the darkest recesses of the oceans near hydrothermal vents. In fact, many different species of tubeworms exist in the various regions of the ocean, and they are often involved in complex symbiotic relationships with other forms of marine life. The elongated, calcified, tube-like ‘shell’ in which adult worms live actually only represents half of their life cycle. They also exist in the juvenile state as free-swimming larvae, which actively seek out new surfaces to colonize. When a tubeworm larva decides it has found a good spot to settle, it initiates metamorphosis that results in anchoring itself to a solid substrate and begin growing into an adult worm.  After the adult worms release gametes into the water, they join to form new larvae, thus completing the life cycle. 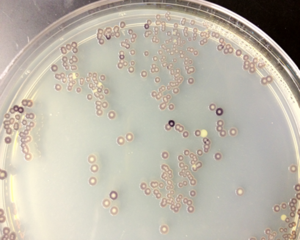 Recently, biologists have discovered that bacterial biofilms  are important participants in the life cycle of many marine invertebrates. For invertebrates such as the tubeworm, Hydroides elegans (well known by seafaring types for its role in biofouling), bacterial biofilms are known to produce a signal required by the larval stage of the worm to become able to settle and develop into a mature, stationary adult. When they receive this signal, the larvae of H. elegans embed themselves into the bacterial biofilm. H. elegans typicallylives in shallow waters in the so-called ‘benthic zone’, or lowest depth, where it shares an interesting relationship with a bacterium, Pseudoalteromonas luteoviolacea (P. luteo). Thisis a biofilm-forming bacterium that is responsible for inducing metamorphosis in H. elegans. Until recently, what this signal was and how it functioned remained enigmatic. 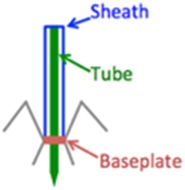 Here we examine a recently published paper by Shikuma et al. that sheds light on this fascinating bacterium-tubeworm relationship. The authors took a close look at a cluster of genes found in P. luteo that had previously been identified as essential to their ability to induce metamorphosis in the tubeworm.  They found that some of the sequences resembled a family of bacterial genes encoding the bioactive agents called bacteriocins. Surprisingly, some bacteriocins share morphological and sequence similarity with the tail structures of phages. Many phage use contractile tails to breach the cellular envelopes of their bacterial hosts and gain access to the cytoplasm. The phage tail-like bacteriocins have all the tail components of a functional phage but without the DNA filled head of the virus, a most striking example of evolution leading to multiple uses of a biological structure.  And these structures are also used for a kind of bacterial protein secretion called Type VI or in the virulence of the bacterium Photorhabdus against moths. But, remarkably, phage tail-like structures have yet other uses. This paper shows convincingly that it is these structures that provide the signal for a beneficial activity, the initiation of metamorphosis in H. elegans. The authors appropriately name these proteins MACs, for Metamorphosis-Associated Contractile Structures. 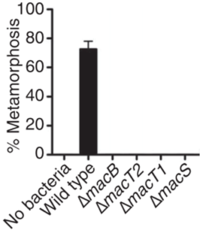 One of the most interesting aspects of this study was the elucidation of the physical structure of the MAC proteins. The MACs of P. luteo are made of four major proteins: the baseplate, the sheath, and two tube proteins, each encoded by a separate ORF.  In vitro, MACs are released extracellularly when a small percentage (approximately 2.4%) of the P. luteo in a biofilm population lyse. To investigate which components of the MAC complex are required for induction of metamorphosis, these researchers made mutants deficient in the MAC structural genes. Each construct contained a baseplate-GFP fusion protein to allow visualization of the released MACs. Next, they purified the MACs and added them to H. elegans. None of the mutant proteins were able to induce metamorphosis.This suggests that the full and intact MAC complex is required in the H. elegans lifecycle. 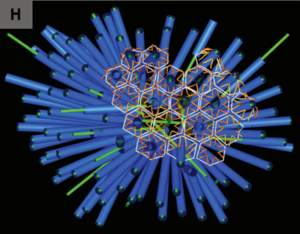 Using cryoelectron microscopy, the group obtained stunning images of MACs in what is assumed to be a close representation of their native state. MACs do not function individually. Rather, they make highly ordered arrays that are held in place in supramolecular hexagonal lattices. This is the first time such a complex structure consisting of phage-like tails has ever been observed, and it may give insight into the native structures of related bacteriocins. The MAC tube protein appears to exist in one of two conformations thought to represent two different functional states: one in which the tube protein is still present in the MAC complex, and one in which it is missing. Based on this and knowledge of how phages inject their DNA into host cells, one could speculate that the MACs function as a molecular gun, irreversibly firing the tube protein into the cell membrane of the larva of H. elegans.  The nature of the stimulus that causes the MAC tube protein to be fired from the complex is not yet known. The novelty of the data produced by Shikuma et al. opens the door to many other exciting questions that the authors hope to answer in future studies. Some of these already come to mind: how exactly do MACs interact with the larvae, how is the tube fired from the complex, how many MACs are required to induce metamorphosis, what is the nature of the symbiosis between bacteria and tubeworm, how is the synthesis of the MACs regulated in the bacteria, and so forth.

Preliminary data suggest that the hexagonal lattice protein that holds the MAC superstructure in place (termed MAC-L) is required for larval metamorphosis. This would seem to indicate that the large, multi-MAC complexes provide the signal, and that individual MAC complexes are not sufficient. The next step in this research will be to annotate the bacterial genome by knocking out specific segments of the genes associated with the MAC proteins. Doing so will allow identification of the key structural components required for the function of MACs. In his own words, Dr. Shikuma “would like to explore the direct interactions of P. luteo with H. elegans to determine precisely how the MAC complex interacts with the larvae.” He is also interested in exploring the phylogenetic diversity of various bacterial species that synthesize MACs.

The pioneering work done here paves the way for more intensive study into MACs and specifically of their relationship to animal life cycles. Who knows, such a structural bacterial element might carry out a beneficial function in humans. Wouldn't that be a novel and exciting concept? It does not seem too farfetched to think that MACs and phage tail-like structures may be useful to humans in the future. Maybe in agriculture, where MACs, in aiding certain organisms to complete their life cycle, may lead to propagation of new animal species in captivity and to other beneficial uses. Could MACs created in gut microbes mediate an immune response in the body? The future seems bright in MACland.

The authors of this paper are participants in the 2014 Winter quarter UCSD/SDSU Integrative Microbiology graduate course. The authors contributed equally to this work.

Note from the authors: This project would not have been possible without the collaborative effort of many people with a wide range of expertise; Special thanks to Michael Hadfield for his expertise in tubeworm biology and Martin Pilhofer for his electron microscopy work.

We sincerely thank Dr. Shikuma for meeting with us personally to answer all questions regarding the study.