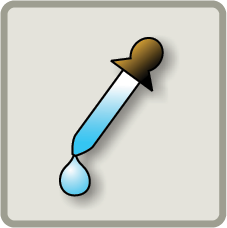 I wonder if you are familiar with this icon. It depicts the “eyedropper,” a commonly used tool in computer graphics and painting programs that allows you to choose any spot on an image and identify its exact color. On a computer this is easy information to obtain; however, in dealing with real materials, the question “but what exactly IS it?” can be harder to answer. To me, a tool akin to the “eyedropper” that works on, say, molecules, sounds like something out of science fiction. Fortunately for us, it is very much fact, thanks to the magic of mass spectrometry.  Each compound has a mass spec “fingerprint” that serves as an ID and which reveals structural relatedness to other compounds.  Since its inception in the early 20th century, the applications of mass spec have come far. Tandem mass spec, which fragments a compound into multiple ions, provides information about the structures of the molecules in the sample. It has also become possible to take high-resolution molecular “snapshots” of the compounds that accumulate on surfaces using imaging mass spectrometry (IMS), which allows us to localize compounds on objects as complex as bacterial colonies. 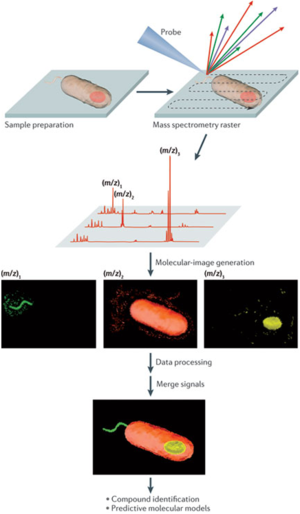 Figure 2. Overview of the workflow in imaging mass spectrometry. Microbial samples are mounted on a target surface and further prepared by applying a matrix or drying. Software programs a raster grid (for pulse-based surface probes) or a sampling path (for continuous surface probes) across the surface of the sample. The mass spectrometer then collects mass spectra from thousands of unique locations throughout the sample surface in an automated manner. The collective data set is then combined into a single image and the relative intensity of individual compounds can be visualized using false-color gradients. The data are then processed using software algorithms for data normalization, hot spot suppression, or segmentation. The resulting molecular signals can be merged with additional imaging mass spectrometry signals or other types of data, including fluorescence and optical images, and the combined images can then be used to identify interesting compounds and to begin building predictive models for biology. m/z, mass-to-charge ratio. Source.

The labs of Kolter and Dorrestein noted that mass spec techniques are uniquely suited to fill a gap in what we know about the chemistry underlying microbial processes. “IMS approaches now enable us to begin to connect observations at the phenotypic level with specific changes at the chemical level”, wrote Dorrestein in a 2011 article, in which he outlines a variety of mass spec-derived scanning techniques and their specific benefits and drawbacks.

The biosynthetic and metabolic capacity of microbes has evaded us for years due to their astounding range and variability under different growth conditions. Yet, its study has rich potential not only to reveal more about microbial communication, sensing, and signal transduction, but also to lead to the discovery of novel microbially derived compounds that may be useful in human applications.

Microbes, of course, do not secrete chemicals for no reason.  Microbially derived compounds that are most beneficial to us, such as antibiotics and siderophores (which chelate iron with high affinity and can thus be used in treating iron-related diseases) are thought to give its producers a competitive advantage in their native environments. This advantage can be gained through more efficiently foraging for food, suppressing the growth of neighboring species, outright killing competitors, or through some other allelopathic mechanism. It is no surprise, therefore, that the group of bacteria that has proved most rich in useful compounds are the Actinobacteria, which, being soil-dwelling, live in intimacy with highly diverse microbial ecosystems. Isolated in single culture, however, they may not sense a need to synthesize their full range of bioactive metabolites. Indeed, genomic analyses of Actinobacteria suggest that natural product isolations from common culture conditions vastly underestimate their biosynthetic capabilities. It stands to reason that these hidden pathways may be stimulated by the presence of a neighbor species with which to compete.

In 2013, the Dorrestein and Kolter groups wondered if the metabolome of a model actinomycete, Streptomyces coelicolor, would change in the presence of five other Actinobacteria strains. The difficulty in analyzing mixed cultures, however, is in detecting metabolites in situ, attributing the products to the correct organism, and observing temporal differences in the interactions. The researchers would need to design an experimental method that overcame these challenges.

How To Find Who Makes What, Where, and When

So, what’s the experiment? To test the notion that the interacting with other actinomycetes may trigger the production of secondary metabolites not found in single cultures, the researchers needed a method of analyzing the secreted metabolome in situ, from the agar surface on which a S. coelicolor colony had grown in proximity to another actinobacterial colony. The researchers developed a novel two-pronged mass spectrometry-based approach to sample the excreted metabolome noninvasively. A technique called Nanospray desorption electrospray ionization (NanoDESI) allows for collection of compounds of interest via a microfluidic bridge of solvent, all without disturbing the sample. Tandem mass spectra of the components can then be compared to other spectra taken from different time points or interactions, ultimately yielding a visualized spectral network. However, with NanoDESI, one cannot find out the position of the compounds in space, making it difficult to find their source. Matrix-assisted laser desorption ionization—time of flight (MALDI-TOF) addresses this problem by using a fine-tuned laser beam to vaporize compounds from just a small, precisely localized portion of the sample. This pinpoint sampling is repeated to obtain thorough coverage of the desired surface, and the results from this “scan” of the sample can then be integrated into a spatial heat map for the compound in question. 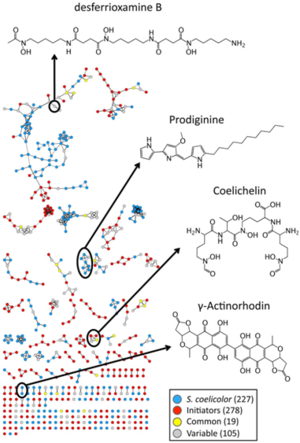 Figure 3. Spectral network of metabolites observed with NanoDESI during actinomycete interactions. The network is composed of nodes representing ions associated with S. coelicolorcolonies grown near another actinomycete and ions from initiator colonies. Nodes associated only with S. coelicolor at any time are blue. Nodes associated only with the initiators are red. Nodes found only in both an initiator and S. coelicolor at the same time are yellow. Gray indicates nodes with variable behavior (i.e., found in multiple contexts). Representative structures of identified metabolites are shown. Source.

It became immediately obvious that species-species interactions widen the actinomycete metabolome dramatically. Compounds of co-cultures that were not found in the S. coelicolor single colony control totaled a whopping 629. Of these, 227 were uniquely produced by S. coelicolor; the rest were associated with the interacting new initiator (the term they use for the other species) colony or with both. To make this glut of data meaningful, they visualized them by assigning each compound to a node, and then connecting the nodes according to their structural relatedness.

This analysis revealed that many nodes fell into subnetworks of compounds similar to known chemicals made by S. coelicolor. A large portion of the total S. coelicolor metabolic repertoire was found to be structurally related to desferrioxamine (DFO) B, a siderophore already known as a metabolite from this organism. The spectral network included at least 12 analogs of acyl-DFOs with varying fatty acid chain lengths. These compounds were differentially stimulated by all five initiators, both in the degree of response and in time.  The majority of compounds are found only in one interaction (Fig. 4A), a point further driven home in Fig. 4B, which shows that the number of unique compounds greatly outnumbers the common ones. A heat map (Fig. 4C) shows  the percentage of acyl-DFO nodes active in each interaction at a given time; comparing each column to the next shows that the responses to each interaction are highly dissimilar. A MALDI-TOF based IMS further showed the location of the acyl-DFOs in each interaction; 3D renderings of the measurements revealed that, in addition to radiating outward, the DFOs also diffuse deeper into the agar, overtly to maximize iron acquisition (Fig. 5).  Finally, the researchers were able to gain insight into the mechanism of upregulation of compound production. Amycolatopsis lacking the siderophore amychelin did not stimulate Acyl-DFO production in S. coelicolor, while the wild type Amycolatopsis did. This suggested that the presence of foreign siderophores triggers the production of siderophores in S. coelicolor.

The group was surprised to find that the chemical responses of S. coelicolor seemed tailored to the species it interacts with. The majority of metabolites catalogued were specific to a given interaction. Wow! Actinomycetes are capable of identifying microbes around them and use this information to trigger highly diversified biochemical pathways. 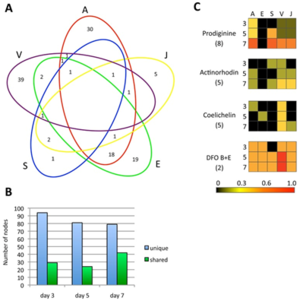 Figure 4. Global analysis of metabolites observed with NanoDESI. (A) Venn analysis of nodes associated with interacting S. coelicolor colonies on day 3. The majority of detected ions fall into the outer zones of the diagram, indicating that each interaction is more unique than it is similar to other interactions. (B) Numbers of unique and shared nodes found at each time point.  The number of unique nodes exceeds the number of shared nodes at every time point, suggesting that the response of S. coelicolor is different depending on the interaction. (C) Patterns of known compound production. Heat map colors indicate the proportion of active nodes in each interaction. For example, 1.0 indicates that all the nodes associated with a given compound family are active. Three, 5, or 7 represent the sampling time in days. Numbers beneath compound names indicate number of nodes associated with those compounds in Fig. 2. Source.

This work reveals that Actinobacteria respond in a sophisticated fashion to surrounding bacteria, and that this response dramatically diverges from the behavior in single culture. It also shows that the coupling of the mass spectrometry methods, NanoDESI and MALDI-TOF, is a powerful method to assess secondary metabolites in microbes, as well as to study interaction dynamics in the environment.

This method has great implications for drug discovery. It bypasses the need for cloning, which often requires the difficult capture of several gene clusters, as well as enabling the detection of compounds produced exclusively  by interactions between two or more species.  Being able to detect low concentrations of compounds rapidly means that isolation of highly potent compounds is possible and so is an accelerated data acquisition for rapidly generating databases and for targeting bioactivity screening. With the increased ease in surveying the metabolic landscape of the microbe world, it may be time to designate a term describing the set of small molecules produced by a microbe.  Mark Martin and Julian Davies  have suggested the term “parvome” for secreted bioactive molecules. 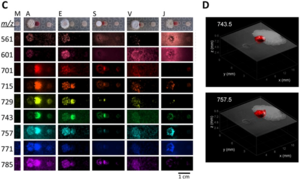 As usual in science, much of this study raises more questions than answers. Were the S. coelicolor colonies successful in competing with their neighbors, and if so, which compounds were responsible: the iron scavenging compounds or the antibiotics? Were the interactions purely competitive, or might they have been synergistic or mutualistic, aiding the growth of both colonies? Ultimately, what are the mechanisms that trigger the production of these novel compounds?  Is S. coelicolor truly sensing the neighboring microbes, or are the varied responses a result of sensing a different combination of compounds produced by each initiator, as the last experiment might suggest? All these are questions that will need more than mass spectrometry to answer; however, these novel techniques seem like an excellent starting point for uncovering questions that nobody knew how to ask. Have we ended up with a biologically relevant “eyedropper?”

For a fine commentary on this work by that master of Streptomycete genetics, David Hopwood, click here. And for a brief discussion of the parvome, click here.

Mizuho Ota is a graduate student at the University of California at San Diego and a participant in the 2014 Integrative Microbiology course.