by Eammon Riley and Alex Meeske

Writing this blog entry with a fellow graduate student nearly 3000 miles away taught us both a valuable lesson in communication: it is simply challenging to communicate effectively across great distances. Not so with microbes. Recently scientists have discovered that bacteria can overcome the problems of long-range communication. With the right genetic rewiring, they can be co-opted into cheap, useful technology.

Biosensors and Oscillating Biopixels: Can You Hear Me Now? 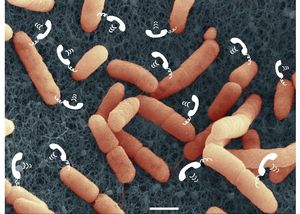 The ability of bacteria to communicate has been harnessed to develop biosensors—devices that use biological mechanisms to detect the presence of molecules. Biosensors can potentially be used to detect pollutants in water, contaminants in food, or to diagnose medical conditions. The mechanisms that microbes utilize to sense and respond to chemical information can be rewired to transmit a signal. The future of biosensors is promising. In addition to their portability and low cost, biosensors offer further advantages: they provide unique, tunable, and highly sensitive outputs that can be registered in real-time. No need for time-consuming and labor-intensive laboratory analyses.

Bacterial biosensors often rely on genetic circuits that are programmed to generate an oscillating feedback in response to a signal. One obstacle to constructing resilient circuits is the intercellular variability arising from a noisy environment that impedes large-scale synchronization of individual cells. Furthermore, biosensors must do more than simply sense their target; they must also reliably convey that information to humans. But such technical hurdles can be overcome by utilizing frequency-based circuits, which are more robust than their amplitude-based counterparts. It turns out that amplitude-based circuits are acutely sensitive to noise-generating environmental factors, whereas frequency-based circuits are easily digitized, readily updated, less sensitive to ambient conditions (consider the sound quality of FM radio over AM radio), and provide a dynamic readout. Consequently, frequency-based circuits have come to permeate our everyday life, comprising the basis of AC power, GPS, and lasers. As such, they are an attractive feature for the future development of biosensors. 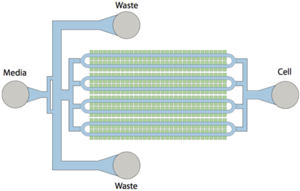 Figure 2. The basic microfluidic device used in this study. Media containing variable concentrations of a pollutant to be studied, in this case arsenite, is fed through the cell port, flowing past the biopixels array into the cell and waste port. During loading, pressure is increased at the cell port and decreased at the waste port to reverse the flow and allow cells to pass by the trapping regions. Source.

A major impediment to the development of effective biosensors is that the endogenous mechanisms of bacterial communication are only effective on a local scale. Many bacteria are capable of sensing chemical signals generated by their neighbors and eliciting a behavioral response to these signals—a phenomenon known as quorum sensing. The discovery of quorum sensing demonstrated that bacteria are well versed in the art of coupling gene expression within a small population of cells. However, harnessing the power of quorum sensing to produce strong, long-range interactions capable of instantaneously synchronizing gene expression presents a challenge. The biggest obstacle is that the signals that evoke a quorum sensing response must diffuse through a liquid medium, a slow process on a macroscopic scale.

Whereas quorum sensing is slow to signal over long length scales, gas phase-mediated communication is rapid, albeit transient and weak. Researchers have exploited the advantages of gas phase signaling, namely speed and range, to rapidly synchronize the behavior of thousands of bacterial colonies. Signaling in the gas phase typically comes at the expense of signal sustainability. The Hasty lab at UCSD, however, has rewired a quorum sensing-based genetic circuit to be reinforced by gas phase signaling, thereby producing coordinated, oscillating bacterial feedback that is quickly transmitted.

To overcome the slow speed and range limitations of quorum sensing on the millimeter scale, the Hasty lab developed a gas permeable microfluidic array composed of thousands of distinct bacterial colonies, coined “biopixels.” Cells in the biopixels carry a genetic circuit that generates an oscillating signal in response to the quorum sensing inducer acyl homoserine lactone (AHL). The researchers designed genetic circuit to be strongly reinforced by, of all things, the simple volatile molecule H2O2 (what could be simpler than hydrogen peroxide?). In this genetic circuit, quorum sensing synchronizes within a pixel, while the vapor species modulates long-range coupling between pixels. Here, the weak but global interactions achieved by gaseous diffusion coordinate the strong, local interactions mediated by quorum sensing. Whereas each system does not produce coherent oscillations individually, nesting these two methods of communication results in what the authors call “synergistic synchronization”. Using these methods, the Hasty lab was able to synchronize over 50 million cells arranged in a 24mm x 12mm array of over 12,000 biopixels—a distance of greater than 5,000 cell lengths—with high temporal precision.

Figure 3. An array of synchronously oscillating biopixels built by the Hasty Lab. Source.

So, why are more biopixels better than one? Larger numbers of biopixels yield signals strong enough to be detected without the need for magnification and expensive optical equipment, allowing the biosensor to remain portable and inexpensive. Furthermore, increasing the number of biopixels allows for the generation of a rich diversity of outputs. Using multiple biopixels of varying size and separation, the Hasty lab hopes to make circuits consisting of switches and logic gates that are far too complex to be achieved by a single oscillating biopixel.

How does the genetic circuit work? (Warning: Start thinking here like an electronic engineer.) The circuit is comprised of three interconnected modules that drive these robust and synchronous oscillations on the macroscopic scale. A quorum sensing module forms the basis of the oscillator and mediates synchronization at the individual biopixel level. Here, both luxI, which encodes an acyl-homoserine lactone (AHL) synthase, and aiiA, which encodes an AHL-degrading lactonase, are expressed from a special promoter under the dual control of LuxR and H2O2. LuxR is a transcriptional activator that drives expression of these two genes upon binding the AHL autoinducer, a chemical signal that initiates the quorum sensing response. Therefore, synthesis of AHL results in self-reinforcing oscillatory behavior because the autoinducer simultaneously stimulates both its own production and degradation.

The effect of the AHL autoinducer is restricted locally by high flow rates in the channels connecting the pixels. Thus, an additional coupling module is necessary for interpixel synchronization. This is achieved by wiring the gene encoding NADH dehydrogenase (ndh), which generates H2O2 vapor, to the same H2O2-and LuxR-responsive promoter driving the genes in the oscillator. The resulting effect is that oscillating levels of the slowly diffusing AHL autoinducer yield synchronized oscillations in H2O2 levels that allow rapid transmission of the signal over large distances. The H2O2 rapidly diffuses through the array, synchronizing the oscillating responses among the biopixels. Finally, expressing sfGFP from an additional H2O2-AND LuxR-responsive promoter generates a photometric read-out of the synchronized oscillations. But don’t take our word for it; take a look at the movies! 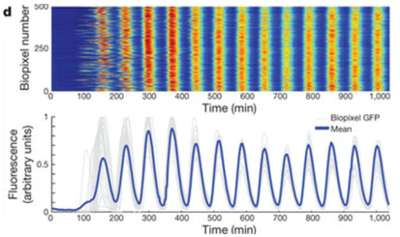 We know what you’re thinking. This circuit is all well and good, but does it actually work as a biosensor? The authors’ next step was to apply this tool towards developing a biosensor for the detection of a common water pollutant: arsenite. One of the advantages of the circuit is its modularity: the individual components can be interchanged and additional components layered on top without altering the basic structure of the circuit. Simply including a copy of luxI encoding an AHL synthase under the control of an arsenite-responsive promoter effectively couples arsenite detection with the quorum sensing response. In the absence of arsenite, the ArsR repressor binds DNA to block transcription of the additional quorum sensing module, allowing only baseline oscillations. The presence of arsenite, however, causes ArsR to release from the DNA and activate transcription of this module, which causes an increase in the oscillatory period that is proportional to the concentration of arsenite. In this configuration, period modulation can be used to determine, with high precision, the levels of toxins in a sample. 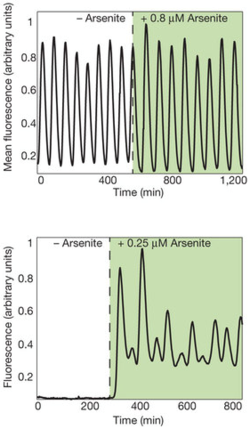 A variation on this circuit involves placing the gene encoding the LuxR transcriptional activator under the control of an arsenite-responsive promoter as the only copy of luxR in the genome. Exposure to arsenite is therefore required for LuxR expression and the activation of the rest of the circuit. Oscillatory behavior is only observed once the level of toxin reaches a critical threshold. Thus, the circuit can be wired in such a way that it is only activated upon exposure to a given concentration of toxin.

In addition to genetic alterations to the circuitry, physical manipulations to the microfluidic device can also be made to generate unique outputs. Altering the distance between biopixels results in anti-phase synchronization, where neighboring biopixels exhibit opposite behavior in activation and deactivation of the circuit. Alternatively, constructing a device in which there is a mixed population of biopixel sizes results in the phenomenon of 2:1 resonance, where the frequency of the larger biopixels is twice that of the smaller traps. All told, there is a rich diversity of outputs that can be generated with only minor adjustments to the underlying circuit.

Inexpensive and responsive biosensors have tremendous utility for developing countries and the military. A tremendous advantage of biosensors in testing water quality is that there is no need for bulky, hi-tech, labor-intensive laboratory equipment. Further research and development may well reveal many more applications for this kind of technology. But we will still need the bacteria. Until humans master gas phase communication, however, we are stuck with telephones.