How a proteins folds into a particular shape is about as central a concern as there is in our postgenomic world. Protein molecules bend, curl up, writhe, and, generally undergo big time changes in shape and form, plus they can make strong connections between segments along their length and with other molecules, large and small. Concepts such as the second genetic code, Anfinsen’s dogma, Levinthal’s paradox, molten globule state, chaperons, disorder, and who knows how many more, all conspire to either complicate or clarify (depending on outlook) our understanding of how such things work in the living world. But without understanding how proteins work we would be left with the simpler contortions of the nucleic acids.

Among the most intriguing participants in these molecular ballets are the amyloid proteins. These are insoluble fibrous molecules that aggregate in a specific manner differing in several ways from the "native molecules". What most distinguishes them is that they make insoluble fibrils. These changes can have colossal consequences, as in the case of the prions, the self-perpetuating amyloid proteins that cause devastating diseases in humans and animals. But not all is bleak in the world of amyloids. Mind you, this is a big subject with ramifications galore. 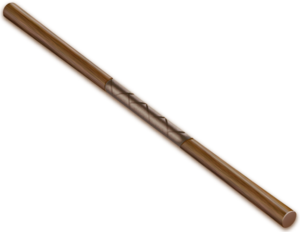 The term amyloid has been misleading from the get-go: it comes from the Latin amylum for starch. It was wrongly called that because one of the fathers of modern pathology, Rudolph Virchow found in 1854 that accumulations of amyloid proteins in tissues became stained by iodine, which is typical of starch. But the name stuck. In time, some three dozen pathological conditions have been associated with the deposition of insoluble amyloid fibers, including such well-known diseases as Alzheimer’s, Parkinson’s, mad cow disease, certain type 2 diabetes, multiple myeloma, plus a number of less known but no less damaging ones.

Disease-causing amyloid proteins are formed by proteolysis of any of a large number of different precursor molecules that include, among many others, the immunoglobulin light chains. The reason for the pathology is that amyloid proteins adopt a hydrophobic cross β-sheet configuration that leads them to aggregate into tissue-disrupting fibrils. For anthropocentric reasons, the molecules in this configuration are called abnormal or misfolded (who’s to say what's normal or what’s folded the "right" way?). 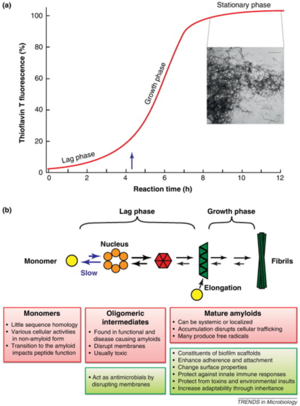 Figure 2. Schematic representation of amyloid polymerization. (a) Kinetics of soluble CsgA monomers polymerizing into curli (fluorescence is from binding the amyloid binding dye thioflavin T).  Blue arrow: end of the lag phase. Insert: transmission EM of CsgA fibers formed in vitro. Scale bar, 500 nm. (b) The transition from soluble monomeric proteins to polymeric and insoluble amyloid fibers is in steps that result in loss- or gain-of-function properties for the protein. In the lag phase, soluble protein assembles into a common intermediate or nucleus that is proposed to be toxic to membranes. The formation of the intermediate is proposed to be the rate-limiting step of amyloidogenesis. Once the nucleus is formed, monomers are templated into growing amyloid fibers. When the monomer population is depleted, elongation stops and enters the stationary phase. The green boxes below the schematic highlight properties of some of the functional amyloids and the red boxes some general properties of disease-associated amyloids. Source.

Amyloid proteins may sure sound disreputable, but that’s grossly unfair because many of them play beneficial roles. Among these is participating in the formation of long term-memory, causing an alarm reaction to virus infection, and possibly even ameliorating symptoms in multiple sclerosis and other neuroinflammatory conditions. But it is in bacteria and fungi that the good side of amyloid proteins is easiest to find. Here, amyloids are involved in such disparate activities as making adhesive structures (“curli” in E. coli and other Gram negatives), forming biofilms (where they are often the major protein components), or helping in the construct of aerial structures (chaplins) in mold-like actinomycetes. And there is more. Amyloids make up the pili that facilitate attachment of tubercle bacilli to host cells and the adhesins of Candida albicans. And amyloids are the beneficial prions in yeast. For a fine review of amyloids as the good guys, click here.

But even among microbial amyloids, there are some that to revert to their original reputation.  Klebsiella pneumoniae, for instance, makes a bacteriocin, Microcin E492, a peptide that assembles as a transient oligomeric intermediate in the cell membrane of other bacteria with dire consequences. But in addition, this protein causes apoptosis in some human cell lines, bringing up questions about the connection between microbial "functional" amyloids and disease causing ones.

The Players in Amyloidogenesis

Now that we are back in our microbiological home (at least for many of the readers of this blog), we can turn to a specific study on the role of amyloids, in this case regarding the formation of a protein of B. subtilis that is essential for biofilm formation. Like with other bacteria, for making a biofilm B. subtilis must make an extracellular matrix that binds the cells together. In this species, the network is composed of both a polysaccharide and an amyloid protein. This protein is called TasA and is invariably accompanied by a small amount of another protein, BslA that makes a thin hydrophobic film. This story involves a trio of genes in an operon that enodes the major amyloid protein, TasA; a minor component, TapA; and SipW, a busy protein that functions as a peptidase to processes the other two and also regulates exopolysaccharide production. In TapA null mutants, TasA fibers don't associate with the cell surface but disperse in the medium. Thus, TapA is an auxiliary protein that is required for fibril formation. How does it do it? And why do we want to know? The answer lies in the complexities of amyloid fiber formation. This is not a simple assembly of subunits into a polymer. Rather, accessory proteins control the correct assembly of fibers and the process goes through a number of defined steps.

To visit for a moment to the better-known system of curli fibers, here also two structural proteins are involved. The minor one (CsgB) contributes to the polymerization of the major one (CsgA). Possibly, CsgB provides a template for the correct folding of CsgA. Something like this has been proposed for the interaction of TasA and TapA.  The researchers, from the Losick and Kolter labs, used an in vitro assay that allows to measure how the addition of TapA enhances the polymerization of TasA. They defined a region of 8 amino acids in TapA that is required for function, possibly by participating in the transition of TasA from monomer to polymer and in making fibers on the surface of the cell. These are nice steps on the way to understand how amyloid fibers are made and in elucidating their important roles. This subject promises to further occupy center stage in microbiology as it has elsewhere.

How to Make Amyloids

I finish with a quote from a fine review by Chapman and collaborators:

“…. the bad rap of amyloids is rapidly brightening. For starters, mature amyloid fibers are probably not the cause of Alzheimer's disease. An even more important factor in reshaping the image of amyloid has been the discovery of functional amyloids, which have taught us that the amyloid fold can be an important part of cellular physiology. As our appreciation for amyloid biology continues to grow, it will be important to fully vet the mechanisms that cellular systems have evolved to assemble, disassemble and control amyloid formation. The mature amyloid fold found in fibrils does not appear to be inherently toxic if handled appropriately. However, similar to many things, amyloid formation at the wrong time, in the wrong place or with the wrong constituents can be catastrophic. The functional amyloids provide a how-to guide for coordinating ordered protein aggregation in ways such that other cellular processes are not negatively impacted.”