« STC Downsize | Main | Of Terms in Biology: The Parvome »

The Jelly Roll of Life

We know that life on earth is incredibly diverse. It can survive deep in the trenches of the ocean and in the frozen permafrost of the arctic. Surely we have much to learn from the study of life, but we also have much to learn about the virus. Even though they are not considered living things, there is no known species that does not play host to some virus. This is an incredible feat considering the variety of life on earth. How is it possible that such a small, seemingly simple thing does not merely tolerate diverse environments, but also thrives in them? 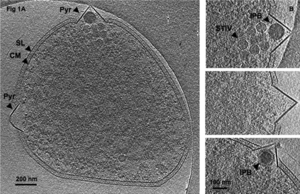 This is one of the questions that scientists hope to answer by studying Sulfolobus Turreted Icosahedral virus (STIV), and its host, Sulfolobus solfataricus. Sulfolobus is an archaeon and, like many Archaea, lives in an extreme environment, growing ideally at pH 3 and a temperature of 80°C. This fascinating organism and its viruses have been discussed in this blog before. Compared to its host, STIV is very tiny, about 1/100th of the diameter of Sulfolobus. Its genome is also small — only 36 predicted genes, while its host has nearly 100 times that, 3,032 to be precise. Although STIV infects an archaeon, it appears to have evolutionary ties to viruses that infect all domains of life. Its major capsid protein is known to contain a specific motif known as the jelly roll, found in viruses from different origins. Viruses whose capsid proteins (or virions) use jelly rolls are lumped into the PRD1-Adenovirus lineage, putting STIV in the company of such viruses as the vaccinia virus (the one used in the original smallpox vaccine).

In a paper published last year, researchers from the Johnson Lab at the Scripps Research Institute began to decipher the structural complexity of this unique virus. By understanding how its capsid is built, they hoped to learn more about not only the life cycle of archaeal viruses, but also the common ties that exist between viruses. The result is a surprising look into the way viruses may have adapted alongside their ever-evolving hosts.

Figure 2. 3D structure of STIV capsid solved by cryo-EM. A) The overall virus reconstruction is displayed with the different protein components individually colored (B345, light blue; A223, light pink; C381, purple). (B) Blow-up view of an icosahedral face with one capsid icosahedral asymmetric unit colored as in A and labeled (1–5 for the trimeric B345 capsomers and P for the A223 penton base). (C) Cross-section of the reconstruction revealing the presence of the viral membrane (gold) and the internal genome (red). Source.

Microscopy Beyond the Limits of Light

The world of the virus is so small that we can’t see them using traditional light microscopy. Instead, we must visualize them with other techniques. A common way to decipher viral structure is to use X-ray crystallography. This technique requires that the particle being observed, whether it is a protein or a viral capsid, be carefully coaxed into crystalline form. Once in a crystal, the particles create a uniformly repeating array. The more regular the crystal is, the more accurate the structure. Some molecules, however, are very difficult to crystallize. For those molecules whose structure cannot be fully solved with X-ray crystallography alone, there are additional techniques that can bring structures into greater focus. 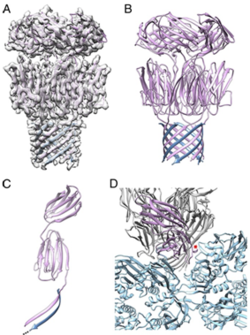 One such technique is cryoelectron microscopy or cryo-EM. Here, a sample is frozen in liquid ethane at temperatures so low that particles — virions in our case — are stopped dead in their tracks. Of course, they will be “caught” in various orientations relative to each other. When a sample is imaged, the resulting film will show a shadow of each particle in a unique orientation. The images from each of the particles can be averaged together in a process called summation to create a much higher-resolution image than is possible from a single image. Once a collection of averaged images for many orientations is compiled, the structure of the particle can be reconstructed by extrapolating all the individual projections into one 3D image. Importantly, this technique is ideal specifically for symmetrical particles such as viral capsids. These icosahedral structures become frozen in many positions, but due to the symmetrical nature of the particle, only a few unique orientations are possible. Like X-ray crystallography, cryo-EM has its own limitations, for instance, unique or asymmetrical parts of a given structure cannot be added together with the same ease. Note that, in addition to elucidating molecular structure, cryo-EM reveals a most unusual pyramidal structure that is formed during maturation of the STIV virions (Figure 1). These are used to puncture the host envelope during release from the cells.

To get the best of both worlds, the authors combined X-ray crystallography and cryo-EM to reconstruct a high resolution 3D image of natively assembled STIV capsids. The result is a beautifully geometric and elegant structure (Figure 2). But the authors of this study didn’t stop there. From the structures they solved, they began the important task of interpreting the role of each capsid protein in forming the whole structure. What they found is that the jelly roll, that motif that STIV shares with so many other viruses, is an integral part of what makes the STIV viral capsid so incredibly simple.

Jelly Rolls — No, Not the Kind You Eat

Although STIV only encodes four structural proteins, the shape of its capsid is deceptively complex. STIV is shaped like an icosahedron, with 20 triangular faces, 30 edges, and 12 vertices. Atop each vertex is a tall turret. How is it possible to form such an intricate structure with so few instructions? The answer lies in the jelly roll. Each of the three major capsid proteins contains at least two jelly rolls. These structures fold into different orientations that can come together to form sophisticated, multilayer protein complexes. An illustration of this concept can be seen in the reconstruction of the A355 penton base structure (Figure 3). A penton base is required at each vertex of the icosahedral capsid. It acts like the foundation of a house, allowing the spike or turret to assemble upward and outward. In STIV, the penton base has three separate layers, two of which are made of jelly rolls. When five A355 proteins come together in a specific orientation, they form a pentamer. Even though the top two layers of this pentamer use the same motif, the way the jelly rolls are oriented relative to each other has clearly visible effects for the structure of the pentamer.

Throughout the structural analysis of STIV, jelly rolls appear as a recurring theme. They are repeated multiple times within the same protein, and they share striking similarity. One can start to see how the jelly roll acts as the basic building block of the STIV viral capsid. Each jelly roll domain looks very similar to others within its protein, but not necessarily similar to ones from other proteins, as is the case for the B345 subunit, which contains an alpha helix. This suggests that duplication events may have occurred, allowing for more and more sophisticated structures from a relatively simple set of instructions (Figure 4).

Figure 4. Organization of the viral membrane. (A) The A55 protein (steel blue) accounts for the unique transmembrane helix present within each icosahedral asymmetric unit as well as for the 38-Å-high cylindrically shaped extension contacting the A223 penton base protein (light pink). The lipid headgroups belonging to the monolayered viral membrane are visualized as two layers in gold whereas the most external layer of the genome is displayed in red. Four out of five of the B345 capsomers surrounding A223 at the icosahedral fivefold axis are also shown (light blue). (B) The A55 pentameric bundle of transmembrane helices is shown within the corresponding cryoEM density. (C) Tilted view of the A223/A55 complex showing the N-terminal β-strand of each A55 monomer connecting to the density appended below the β-pore and reaching the transmembrane domain. Source.

From the sophisticated analyses performed in this study, we can begin to see how jelly rolls are really like viral Legos — each can be assembled in differing orientations to build a multiplicity of unique structures, like a plane, house, or an entire metropolis. Simply altering how each jelly roll is used can form each of the structural components of the STIV viral capsid. The fact that jelly rolls are so ubiquitous in viral structural proteins suggests that they have indeed become evolution’s Legos. As is true for all evolutionary processes, rather than developing appropriate structures from scratch, an evolving virus simply works with what’s available. So, over time, as jelly rolls underwent duplication events, their structure was refined and rearticulated to form whatever shape was necessary.

Such a model also provides an elegant explanation for why so many viruses, with hosts from all domains of life, have jelly rolls. If an ancestral virus containing jelly rolls existed before its host diversified, then these structures would have been passed on until present day to be found in viruses like STIV. If this model were indeed true, then it would suggest that primordial viruses may have co-evolved with their hosts. As those hosts became more and more diverse, so did the viruses themselves.

Jacqueline Humphries is a PhD student in the laboratory of Dr. Gurol Suel at the University of California at San Diego and a participant in the 2014 UCSD/SDSU Integrative Microbiology course.