A Snippet: Antibiotics In The Nursery 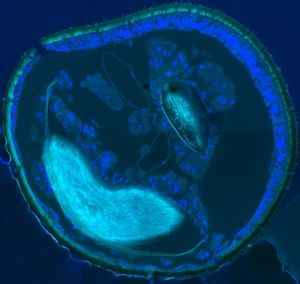 You have heard of the leaf-cutting ants1 that meticulously cultivate "their" fungi2 which provide them with nutrients, and that, in addition, host actinobacteria which prevent bacterial and fungal infections of their fungi as well as their own infection by an entomopathogenic fungus3. No big surprise, other insects stick to high standards of health care too.

One new example is the recently published account of three different genera of beewolf wasps that cultivate Streptomyces bacteria — producing at least nine antimicrobial compounds — for protection against pathogenic fungi (beewolves were intrduced to this blog way back in 2007 here). The observation that these 'Candidatus Streptomyces philanthi' (CaSP) symbionts belong to one single distinct clade but are found in three beewolf genera prompted a more detailed phylogenetic analysis, which led to the conclusion that — in all likelyhood — this symbiosis was already established in the Cretaceous period for which various fossiles of beewolves4 are known.

CaSP bacteria are cultivated by the female beewolves in specialized antennal gland reservoirs (see Figure). From the antennae, the streptomycetes are secreted into the brood cell, taken up by the larva, and incorporated into its cocoon where they protect the larva against infections. Weeks or months later, eclosing adult females acquire the bacteria from the cocoon surface, thus completing the vertical transmission of CaSP. (The fact that these bacteria are cultivated by the insects raises a question about the appropriateness in this instance of the taxonomic term 'Candidatus'. It is reserved for as yet uncultivated species.)

The authors say: "the wasp ancestor acquired the protective symbionts from the soil at least 68 million years ago." Now, can we humans learn from humble insects how to make prudent use of the most powerful weapons against infections — antibiotics — for longer than a mere five decades?