Microbe, Enzyme or Mineral? A Riddle in the Soil 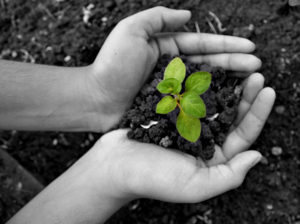 Figure 1. Soil is the most microbially diverse habitat on Earth, and contains twice as much carbon as living plants and the atmosphere combined. Source.

When most people look at soil, they just see dirt. When I look at soil, I see billions of microorganisms crawling atop one another, consuming the dead in a feasting frenzy that stops for nothing save a deep freeze. I see microbes and their enzymes, the digestive juices that break down, transform and release all the energy tied up in our planet’s terrestrial ecosystems.

Through their remarkable ability to decompose nearly anything that comes their way, soil microbes collectively represent a planetary recycling factory, one that takes carbon from dead organic matter back to the atmosphere as CO2. Soils “exhale” CO2 for the same reason you and I do. We’ve eaten something, broken down the carbon bonds that hold it together, and extracted all the energy that we could. CO2 is the generic waste product of cellular metabolism, the last bit of carbon that our own metabolic inefficiency precludes us from using. Ecologists have coined the term soil respiration to describe the collective exhaling of microbial carbon decomposition. 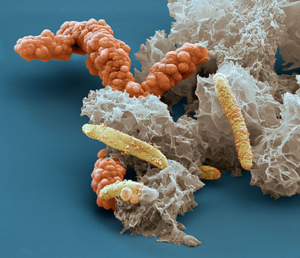 This earthly exhaling is an event of profound significance to the biosphere. It dictates how much carbon remains in soil, and how much returns to the atmosphere, where it acts as a heat-trapping greenhouse gas that helps regulate Earth’s climate. Biogeochemists are working to understand how microbes contribute to the global exhalation of Earth’s soils. What makes them breathe slower? Faster? How does this influence the distribution of carbon across a forest? Across the planet? Over a year’s time? A century? Understanding what makes soil microbes breathe will allow scientists to make better predictions about our planet’s future. How will human disturbances, like those eliciting climate change, urbanization, or fertilization affect this essential pathway?

In order to predict why soils exhale, we need to first understand who or what is breaking down carbon. As readers of this blog know, when you really get down into the dirt, things get complicated. Enzymes mediate nearly every step in soil carbon decomposition. Some of these enzymes reside inside living microbes, but many are released outside the cell, into the environment. These exoenzymes act as independent entities from their microbial producers. This means that exoenzymes can—and often do—persist in soil long after their microbial parent dies. By chemically associating with soil minerals, exoenzymes can form stable complexes that resist drought, pH changes, even attack and degradation by other enzymes. And finally, to make matters even more complicated, some carbon decomposition occurs by entirely abiotic processes. Certain soil minerals, such as iron oxides, strip electrons from organic matter by oxidation. Oxidation is important for the breakdown of large, complex molecules such as lignin, the primary building block of wood.

Exoenzymes and soil microbes represent two different pieces of the decomposition puzzle, abiotic carbon oxidation a third. Since these different aspects of decomposition may respond differently to environmental change, we’d like a way of separately measuring their contributions to the soil carbon cycle. But separating exoenzymes, microbes and minerals, all of which not only coexist within nanometers of each other, but are often chemically bonded, is no easy task. Soil microbial ecologists have long recognized, sometimes acknowledged, but largely ignored our inability to separate the living from the non-living in soil carbon decomposition.

Readers who are familiar with microbiology and biochemistry laboratory research may be surprised by the simple nature of the questions biogeochemists are tackling in soils. It is important to keep in mind that laboratory studies represent a controlled and simplified environment, while soils are one of the most spatially and temporally complex environments on Earth. Even foundational aspects of soils research, such as determining what constitutes a representative soil sample, have no easy answer. Answering these questions at all requires a deep understanding of the relevant biological, chemical and environmental parameters, and the mechanisms through which they interact.

Separating the living and the dead

At last, we may have a roadmap for solving a problem that has eluded microbial ecologists for years. Last month, a group of researchers led by Joshua Schimel published the first study that rigorously attempts to separate cellular carbon metabolism from exoenzyme activity in soils.

To separate cellular from extracellular metabolism in soil, the researchers recognized the need for a method that disables living cells while leaving exoenzymes intact. This is no trivial problem. Heat can be used to sterilize soil, but it can also disrupt exoenzyme activity and accelerate the breakdown of other organic compounds. Toxic chemicals like sodium azide can inhibit most microbial activity, but a small fraction of microbes develop resistance to them.

Two potentially useful methods the researchers tested are chloroform fumigation and gamma irradiation. Chloroform, a nonpolar and hydrophobic molecule, is chemically inert but nonetheless deadly. Chloroform buries itself in the lipid bilayer of cell membranes, causing them to become disorganized, and eventually rupture. However, some exoenzymes may be affected by it. Gamma radiation is powerful ionizing radiation that kills cells by causing double stranded breaks in their DNA and is frequently used to sterilize food and medical equipment. Very few studies have measured the effect of gamma radiation on exoenzymes. The researchers compared the efficacy of these to techniques to autoclaving, the more traditional sterilization method in which a sample is subjected to high heat.

The researchers collected samples of soils from a California grassland and sterilized them using each of these three methods. They then tested the response of cellular and extracellular soil carbon metabolism. They also evaluated viable cell counts through culturing and using a fluorescent vital stain to distinguish living from dead cells.

To determine the extent of extracellular metabolism, the scientists measured the activity of eight exoenzymes produced by a wide range of soil microorganisms. These enzymes degrade common components of soil organic matter (lignin, cellulose, chitin and proteins). They included six hydrolases and two oxidases. Hydrolases like beta-glucosidase are important for degrading molecules with predictable, repeating structures, such as cellulose. Oxidases play a central role in breaking down larger, more complex structures, similarly to abiotic oxidation.

To evaluate cellular metabolism, the researchers used a technique called “substrate induced respiration” (SIR). SIR involves adding a small molecule (typically an amino acid or glucose) that cells can metabolize completely, and measuring the CO2 released. The CO2 generated from an SIR experiment indicates the metabolic potential of the live cells in a sample. 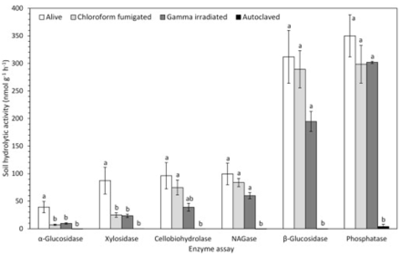 They found that chloroform and gamma irradiation both led to a 1,000 fold reduction in the number of living cells. Autoclaving was a more powerful sterilization technique, reducing the number of live cells by approximately 100,000 fold. Most exoenzyme activities were only modestly reduced by chloroform treatment or gamma irradiation (Figure 3). However, sterilization did reduce the activity of alpha-glucosidase and beta-xylosidase by approximately 75%. Alpha-glucosidase and beta-xylosidase also had the lowest activity in non-sterilized soils. The authors observed that sterilization eliminated a relatively constant amount of activity across all enzymes. They speculate this constant reduction affected low-activity enzymes proportionally more.

From these initial findings, what can we conclude? Both chloroform and gamma radiation effectively sterilizes soils (if we can accept the fact that a few hardy spores probably resist these treatments). Both treatments also keep exoenzyme activity intact. A few caveats here and there, but by and large both techniques appear promising.

But what about cellular metabolism? Did sterilization successfully eliminate it as well? Your first reaction might be that this is a silly question. If we’re killing all living cells, we must also be killing cellular activity, right? That’s at least what the researchers initially thought. 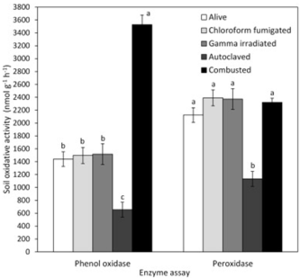 The SIR results tell a different story. The investigators added a number of different simple carbon substrates, all of which are broken down during basic cellular metabolic processes like glycolysis and the TCA cycle. Following sterilization, respiration from glucose and amino acid substrates was halted. However, respiration from TCA-cycle substrates, including pyruvate, citrate and ketoglutarate, was reduced but not eliminated (Figure 5). How could dead cells continue respiring? The authors speculate that certain dehydrogenases, enzymes that break down TCA cycle-substrates, are able continue functioning outside the controlled environment of the cell. This finding was unexpected. The TCA cycle is considered to be completely cellular, requiring specific electron carriers such as NAD+ and redox gradients maintained in the cell. Finding extracellular TCA-cycle enzyme activity calls this assumption into question, further blurring the line between microbial metabolism and environmental metabolism.

Another surprise came from the oxidases. While all hydrolytic enzymes were killed by high heat in the autoclaving treatment, oxidative reactions persisted, and in some cases even increased (Figure 4). The authors speculate the oxidative activity they measured in autoclaved soil is the result of abiotic processes, supporting the notion that a large amount of oxidative decomposition in soils can be caused by mineral catalysis. 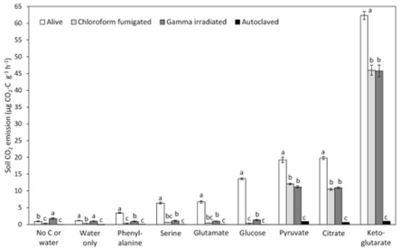 Taken as a whole, this study finds both chloroform fumigation and gamma irradiation to be promising methods for distinguishing between cellular and extracellular metabolism. Some refinements are certainly needed—finding a way to separate living from non-living oxidation, for instance. But both methods already promise to unravel new mechanisms for microbial carbon metabolism, as highlighted by the finding that some TCA-cycle enzymes can persist after cell death. Now investigators can start using these sterilization treatments to measure the lifetime of exoenzymes in the environment. Right now we can only guess at how long exoenzymes stick around once they’re produced. Understanding the long-term persistence of these enzymes in the environment will help us to better gauge the capacity of soils—even in the absence of living cells—to continue digesting the planet’s carbon.

This piece was first published on the author’s personal blog, The Lonely Spore.

Maddie Stone is a PhD candidate at the University of Pennsylvania studying soil carbon biogeochemistry. She is an avid science blogger, covering newsworthy microbes from across the world at lonelyspore.com. For microbe tweets and more science news, follow her on twitter @themadstone.