« TWiM #79: A Community of Microbiologists | Main | A Snippet: Antibiotics In The Nursery »

Retroviruses, the Placenta, and the Genomic Junk Drawer 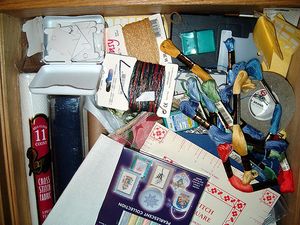 At our very core, we are all hoarders

By now, many of us are aware that a considerable portion (45% or more) of the human genome consists of transposable elements. These are mobile genetic sequences, such as Alu repeats and long and short interspersed nuclear elements (LINEs and SINEs). A whopping 18% of this so-called "dark matter of the genome" is retroviral sequences left over from ancient infections of germ line cells. This means that, in total, ~8% of the human genome is retroviral, compared to only ~1.5% that codes for human genes — a situation that led my Ph.D. advisor to claim that there are more retroviruses in us than there is us in us! Due to mutations, the viruses no longer function as viruses, but are a collection of broken parts.

Considering that the human body carries out ~10,000 billion cell divisions in a lifetime, the replication and maintenance of this viral junk heap requires a considerable amount of energy and resources. So why do we keep it around? Probably for the very reason that nearly every household has a junk drawer (Figure 1): weak purifying selection (read, lack of motivation to clean up), combined with the hunch that “this stuff might come in handy someday.” In fact, it appears that an important evolutionary innovation — the placenta — has depended on parts pulled from the “genomic junk drawer.”

Figure 2. The invasion of the uterine wall by proliferating trophoblast cells post-fertilization. Source

The birth of the placenta

The placenta evolved in the ancestors of mammals ~150 million years ago, and is a feature of the vast majority of modern mammals, including ourselves. The advantages conferred by this organ are obvious — it protects the developing embryo inside the mother, shields it from the elements, and ensures a steady supply of nutrients, moisture, and the appropriate temperature for growth and comfortable napping. How did this lucky innovation come about?

Some hints lie in the details of placental development, which begins five days after fertilization with the formation of a clump of cells called the blastocyst (Figure 2). The blastocyst consists of an inner cell mass that will become the embryo, and an outer layer of cells called trophoblasts, from which the placenta arises. The trophoblasts invade the uterine wall and proliferate, in a tumor-like manner, differentiating into a specialized cell type, the cytotrophoblasts. The cytotrophoblasts then fuse together into a layer of multinucleated cells, the syncytiotrophoblasts, creating a sac firmly attached to the uterine wall. This layer of fused cells creates a specialized barrier between mother and fetus, through which the fetus can acquire nutrients and growth hormones while ridding itself of waste products. The fetus will express both maternal and paternal proteins. While the former will be tolerated by the mother’s immune system, the latter will be recognized as invasive. It is the placenta that protects the fetus from attack by the mother’s immune system.

The italicized portions above have suggested an uncomfortable comparison of pregnancy to invasion by a parasite, with the mother’s physiology being reworked to serve the needs of the fetus. Whether you like the analogy or not, the placenta's position at the materno-fetal interface indeed likens it to an interface between a pathogen and its host. This situation requires an elevated level of adaptability — a challenge for complex DNA organisms like us, with our stodgy mutation rates, but typical of faster-replicating entities such as, say, the viruses.

The layer of fused cells that forms the membrane between mother and fetus is the key histological feature of the placenta. Cell-cell fusion is not a common feature of mammalian cells, but it is the basis of how retroviruses and other enveloped viruses enter host cells during an infection. Here’s the story: the retroviral membrane is studded with proteins designated “Env” for envelope that are made up of two parts. part SU) for surface) is responsible for binding to a specific receptor on the host cell, while the other part (TM, for transmembrane) fuses the cell and virus membranes together, so that the virus can enter the cell. By the same mechanism, a cell expressing Env can fuse with another cell expressing the appropriate receptor protein. Due to this ability, the retroviral Env protein is said to be "fusogenic."

By the time the placenta evolved there were already many retroviruses around that had integrated into the genomes of vertebrate species (so-called "endogenous retroviruses" or "ERVs"). Once they've inserted into the genome, ERVs evolve neutrally and in time become inactivated by the accumulation of mutations and by mechanisms that the host uses to repress their expression. Env coding regions, however, are sometimes conserved after integration. The thinking is that the Env proteins can block receptors from being used by any retroviruses that use the same receptor. Therefore, if a recently integrated retrovirus is defective for replication but can still express Env, it can confer protection on the host from infection with similar retroviruses. In other words, Env coding regions, like stray rubber bands in a junk drawer, are always in supply. 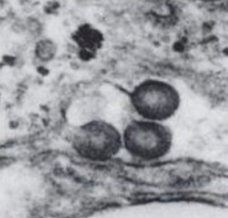 Clues that mammals actually do avail themselves of these spare parts emerged in the 1970’s: Electron micrographs of placental tissue from humans and a variety of other animals showed retrovirus-like particles budding from placental cells, particularly within the syncytiotrophoblast layer — the layer consisting of fused cells (Figure 2). The presence of these particles in healthy tissues of many placental mammals prompted a few brave researchers to entertain the idea that ERVs actually play an essential role in placental development. The rather astounding implication was that an accidental infection of a mammalian ancestor by a retrovirus was responsible for the evolution of a novel mechanism of reproduction, one that launched the entire lineage of placental mammals no less.

Within a few years, a couple of prospects for the putative placental retrovirus were found among the HERV-W and HERV-FRD families of human ERVs (HERV stands for human ERV). Comparative genomics reveals that HERV-W infected the germ line of an ancestor of the great apes (including humans) over 25 million years ago (mya). HERV-FRD is even older, having first infected the ancestors of all monkeys except prosimians some 40 mya. Although during their long tenure in the genome both retroviruses have accumulated mutations that render them incapable of producing infectious virions, the reading frame across the envelope genes (env) are still intact. Additionally, they fulfill the three requirements for a gene to be involved in placental formation: 1) placenta-specific expression, 2) fusogenicity, and 3) sequence conservation across multiple species, which suggests an essential role in survival. In situ studies reveal that HERV-W is expressed in many placental cell types, whereas HERV-FRD expression is limited to a particular type of cytotrophoblasts. In experiments on primary cultures of cytotrophoblasts, inhibiting either Env—but especially that of HERV-FRD—reduces the fusion efficiency and the production of the pregnancy-hormone human chorionic gonadotropin. It sure sounds like both HERV-W and HERV-FRD contribute to placental development in humans. HERV-W was named syncytin-1 and HERV-FRD, syncytin-2 for their ability to fuse cells and form syncytia.

Once they knew what to look for, researchers made fast work of screening the mouse genome for ERVs with open reading frames across the env gene. They found two sequences, now known as syncytin-A and –B (the nomenclature changes from 1 and 2 in humans to A and B in mice), which met the three criteria for bona fide syncytinhood, mentioned above. Furthermore, when researchers prevented expression of syncytin-A in mice, unfused cells accumulated, which disrupted the syncytiotrophoblast layer and caused the embryos to die at mid-gestation. This finding constituted proof that a gene of retroviral origin is essential for survival in mice. Prevention of syncytin-B expression resulted in impaired formation of one of the two placental layers found in mice, confirming that it, too, had a role in placentation.

Remarkably, mouse syncytin-A and -B differ from primate syncytin-1 and -2 in key respects — they are not in analogous locations on the chromosomes and are from distinct retrovirus families. In other words, they represent separate, independent gene capture events (as if the mouse and primate lineages each pulled different rubber bands from the junk drawer and used them for the same purpose). An amazing pattern of convergent evolution has emerged as more examples of independently acquired syncytins have surfaced in various mammalian orders: syncytin-Car1 is found in carnivores; syncytin-Ory1 in lagomorphs (hares, rabbits, and pikas); syncytin-Rum1 in cows and various other ruminants (Figure 4a); and most recently, syncytin-Mar1 in squirrels. 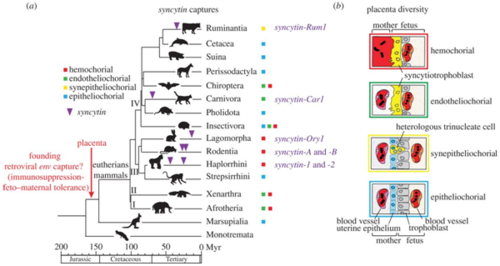 Rummaging through the genomic junk drawer

Because ERVs can cause disease in a number of ways, the host generally represses their transcription. Repression is particularly strict in embryonic stem cells, where unchecked ERV activity could interfere with the complex and delicately timed pathways required during development. In stark contrast, repression is relaxed in the progenitors of placental cells, and transcripts from multiple ERV families are produced. Why would that be? The placenta is a transient organ, fated to be eaten or plunked into a specimen pan on the way to the trash. At the same time, the placenta's position at the materno-fetal interface requires an elevated level of adaptability. The derepression of ERVs might be seen as a means of harnessing a little b of the adaptive potential of faster-mutating entities in a context where costs to the host are not too high, due to the transient nature of the placenta.

The marked diversity of placental structures among mammalian species (Figure 4b) may be an outcome of this ERV-induced plasticity, as hypothesized by members of the Heidmann lab, who are leading the charge in identifying and characterizing syncytins. Since the various syncytins originated from different retroviruses, they exhibit differences in expression levels, fusogenicity, and receptor usage. Such differences likely impact placental structure. Also reflecting this plasticity is evidence within some species that older syncytin genes are phased out when a new env sequence is captured (Figure 4a, Rodentia and Haplorrhini orders). This ongoing replacement model would explain the discrepancy between the ages of the known syncytins (captured between 12 and 60 mya) and the emergence of a primitive placenta some 150 mya.

All of this suggests the oh-so-elegant junk drawer model: Derepressing ERV expression in placental progenitor cells can be likened to opening the junk drawer and rummaging around for anything that might be of use. Since ERVs are not random bits of DNA but complex sequences that code for various functional domains such as binding sites, proteases, promoters, and fusion domains, the likelihood of pulling something useful out of the ERV junk drawer is rather high, even if the item wasn't originally designed for the particular task. It is amazing to think that an evolutionary innovation of such consequence — the placenta — was essentially pulled from the genomic junk drawer!