by Marcelo Barros and Brana Vlasic 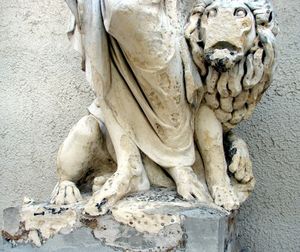 Concrete is the most widely used building material in the world, with untold amounts being produced yearly.  It has always been regarded as a strong, solid, impenetrable, almost indestructible material yet it can make cracks that are vulnerable to penetration by water. As the result, structures of great economic and esthetic value are forever at risk.  The cost of fixing this problem is staggering. Estimates are that fixing concrete highway bridges in the United States alone would amount to $4 billion a year. In addition to the expense, making cement is not environmentally friendly. The process generates about 7% of all the CO2 that is released into the atmosphere due to human action.  (Incidentally, cement is the powder used to make concrete. What we walk on is concrete, not cement.)

Typically, concrete’s vulnerability to water starts with a small crack or imperfection in the material that allows for a small amount of water to penetrate. In climates where the temperature is low enough for water to freeze, the initially small cracks widen and propagate considerably. Water causes other forms of damage such as chemical leaching, which leads to decalcification and ultimately the weakening of the material properties. 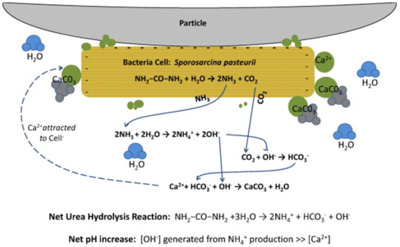 Figure 2. Bacteria serve as nucleation site for CaCO3 precipitation in the substrate particles. Calcium ions are attracted to the negatively charged bacterial cell wall. When urea is added to bacteria, dissolved inorganic carbon and ammonium are released. In the presence of calcium ions, this leads to local supersaturation and eventual precipitation of calcium carbonates, which act as binder between loose substrate particles. Source.

Preventing concrete decay should obviously have high priority in the scheme of things. Usually, when cracking occurs, the attempt is to fix the concrete by approaching the problem from the outside in, that is, to apply some healing agent that will act from the surface inwards. But research has started to look to a different and potentially more effective solution.  Several approaches towards this aim are being investigated, some towards “healing” the concrete cracks, others towards inhibiting corrosion of metal rebar rods. Here is where microbes come in.

It has been known for some time that certain bacteria can be used for repairing cracks in concrete, relying on their ability to produce cement-healing calcium precipitates that can fill holes and cracks in decayed structures. The effort is clearly worth it: the ultimate aim is to create completely autonomous self-healing concrete. With this in mind, several groups are pursing microbe-based approaches (click here and here). For example, researchers at Ghent University have been investigating the use of Bacillus sphaericus for regenerating damaged concrete. A recent review of this subject is found here.

The microbiology behind it 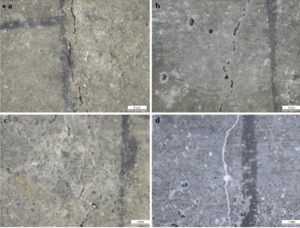 Under some conditions, certain bacteria precipitate minerals in their environment.  Thus, we are familiar with the stunning stalactites in caves that are produced over millions of years from complex biomineralization processes. The idea here is the same: immobilized bacteria within the concrete will confer self-healing properties to the material via biomineralization. The biochemistry behind this seemingly magical feat depends on the bacteria being able to precipitate calcium carbonate through the decomposition of urea (CO(NH2)2) into ammonium (NH4+) and carbonate (CO3-2) ions. When urea-containing water starts to sift through the material, the bacteria present become activated and initiate the biomineralization process, which leads to the filling of the cracks. Theoretically, this self-regenerative capacity could be endless. Urea, incidentally, is widely used as a fertilizer and is relatively cheap, around $300 a metric ton. In summary, as soon as initial cracks start to appear, the bacteria within the concrete are able to heal it by forming and precipitating calcium carbonate, effectively “sealing” back the crack in a regenerative process.

For the purpose of protecting the bacteria and keeping them in place, these researchers mixed diatomaceous earth (DE), which is a natural and soft siliceous sedimentary material. It possesses favorable properties, including high porosity, lightweight, chemical stability, inertness, and resistance to heat.   DE immobilizes the bacteria and protects them from the relatively high pH of the concrete.  In the presence of DE, the bacteria carried out some 12-17 times more urea decomposition than in its absence. The optimal ratio of DE per bacterial weight turned out to be 60% (w/v).  In addition, ureolytic activity was enhanced by the addition of nutrients in the form of yeast extract.

The authors artificially created a crack and allowed it to propagate, then exposed it to various conditions. Treatment with bacteria and urea in DE completely healed the crack, whereas concrete without the bacteria faired significantly worse. Figure 3 shows the results of using DE with immobilized bacteria in water and in a urea- and calcium nitrate-containing liquid (the so-called deposition medium).  Electron micrographs (Figure 4) showed that calcium carbonate is precipitated at larger quantities within concrete that had bacteria immobilized in DE in the deposition medium. The solid protrusions visualized are the very product of biomineralization in action.

DE, like urea, is also relatively cheap, yet the addition of all the components of the mixture would add about 20% to the cost of concrete.  However, if you calculate the gain from the self-healing process and the decreased cost of maintenance, this may well turn out to be a bargain.

A great deal of research still needs to be done to fully characterize how different strains will survive within the concrete and cope over the long-term. Additional research also needs to be done to find better alkaline resistant strains, which could solve or mitigate the pH limitation.  But the results presented in the paper in question point to a promising future. And once again, bacteria come to the rescue.

We can only imagine a day when we will be driving in highways, walking on curbs, sleeping under roofs, and working inside buildings that will be suffused with microbes that are constantly at work in the maintenance of these structures and facilities. The cities we will be living in won’t be inanimate at all.

Marcelo is a graduate student in Bioengineering at the University of California at San Diego. Brana studied Political Science at that university.