As more and more information becomes available, one marvels (and also frets) at the sophisticated strategies that pathogens have evolved in order to evade their hosts’ defense mechanisms. Many pathogens of plants and animals deliver effectors into their hosts in order to suppress immune responses. To date, the vast majority of these molecules have turned out to be proteins.  However, for some two decades now, we have lived in an era when RNAs, especially small ones, have been found to play a surprisingly broad set of regulatory roles. The repertoire of these molecules includes both positive and negative effectors — those that enhance gene expression, as well as those that suppress it. Weiberg and coworkers now report that small RNAs (sRNAs) from a fungal pathogen of plants act as effectors to block the immune systems of Arabidopsis and tomato. 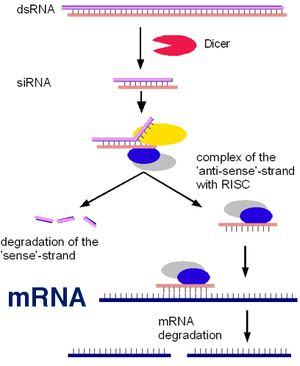 High on the list of RNA regulatory activities is RNA interference (RNAi), a mechanism by which certain double-stranded small RNA (sRNA) molecules suppress the expression of specific genes. For such suppression to occur, the sRNAs need to interact with a multiprotein complex known as RISC, for “RNA-induced silencing complex.”  The sRNAs are incorporated into RISC as single-stranded RNA. The captive sRNA strand then binds to its complementary (“target”) sequence on an mRNA molecule, bringing along with it another component of RISC called Argonaute (AGO). AGO is an endonuclease that cleaves the target mRNA, thereby effectively silencing the corresponding gene.

The RISC silencing mechanism can be induced by endogenously expressed sRNAs, as a means of regulating expression of genes involved in various cellular processes, or by the invasion of pathogens, as a means of defense.  A key player is Dicer, an RNase III-type endonuclease that can recognize and cleave dsRNA from viruses into short fragments (20-25 base pairs long) to yield sRNAs. These sRNAs then interact with RISC to suppress expression of viral genes that carry the target sequences. Since some plant pathogenic viruses have double-stranded RNA genomes, RISCs play an important role in protecting plants against such infections. In this report, the plant pathogen under investigation is a fungus rather than a virus. And, perversely, the fungus uses the plant’s own RISCs to silence the plant’s defense genes.

The ubiquitous Botrytis cinerea is a fungus that causes gray mold disease in many fruit and vegetable crops, resulting in annual losses of 10 to 100 billion dollars globally. Paradoxically, it also causes the so-called “noble rot” of grapes, an infection that shrinks them and results in some highly prized extra-sweet wines, e.g., sauternes. Small RNAs have previously been detected in fungi and oomycetes (water molds), but it was not known if they play a role in their host-pathogen interactions. To investigate this possibility, the researchers profiled sRNA libraries from B. cinerea-infected Arabidopsis leaves and tomato leaves and fruits. Using stringent target prediction criteria, they identified a total of 73 B. cinerea (Bc) sRNAs anticipated to target host genes in both plants. The researchers focused on three of these sRNAs (Bc-siR3.1, Bc-siR3.2 and Bc-siR5) that were abundantly expressed in the infected plants and had potential targets likely to be involved in the immunity of both kinds of plants. 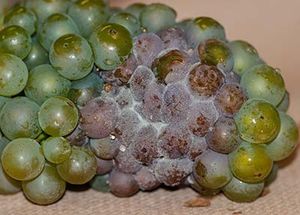 The researchers found that several genes targeted in the coding region by Bc-sRNA were indeed suppressed. Among these were the mitogen-activated protein kinases 2 (MPK2 and MPK1); a gene related to oxidative stress, peroxiredoxin (PRXIIF); and cell wall-associated kinase (WAK). By comparison, the expression levels of two plant defense genes that lacked Bc-sRNA target sites (PDF1.2 and BIK) were greatly increased after infection, indicating that suppression was not due to cell death and that some, but not all, plant defense genes are targeted by sRNAs.

To determine the effect of Bc-sRNAs on host plant immunity directly, the researchers constructed transgenic Arabidopsis lines that ectopically expressed the three sRNAs (Bc-siR3.1, Bc-siR3.2 or Bc-siR5). The uninfected plants that expressed the sRNAs all appeared normal. When challenged with B. cinerea, however, all of the plant lines became more susceptible to infection, suggesting that Bc sRNAs play an active role in pathogenesis by targeting plant genes involved in immunity.

The majority of the 73 predicted Bc-sRNAs are 20-22 nt long and contain a 5’-terminal “U” structure — features that are indicative of Argonaute (AGO)-binding molecules. So could the B. cinerea sRNAs be hijacking the plant’s own AGO1 during infection? Evidence for this scenario was found in immunoprecipitation experiments, where Bc-siR3.1, Bc-siR3.2 and Bc-siR5 were clearly detectable in the AGO-fraction from infected, but not uninfected Arabidopsis. They also saw that mutating AGO in plants reduced disease level, further supporting the idea that B. cinerea hijacks the host RISC machinery for its own purposes, to silence some key host immunity genes.

Fungi process sRNAs via various pathways. Many of these pathways involve the Dicer protein — the core sRNA processing enzyme. B. cinerea contains two Dicer-like genes (Bc-DCL1 and Bc-DCL2). In order to see whether biogenesis of the Bc-sRNAs depended on Dicer, the researchers generated B. cineria strains in which one or both of the DCL genes were deleted. In RT-PCR assays, Bc-siR3.1, Bc-siR3.2 and Bc-siR5 were not detected in the dcl1 dcl2 double mutant, suggesting that their biogenesis was dependent on a Dicer-like protein in the fungus. The double mutant also caused smaller lesions than those of wild-type or dcl1 or dcl2 single mutants on both Arabidopsis and tomato leaves, offering further evidence that the three fungal sRNAs play a key role in the ability of B. cinerea to overcome the defense system of its plant hosts.

This research reveals a novel mechanism employed by a pathogen to thwart host defenses and thereby ensure successful infection. Thus, sRNAs that the fungus makes and introduces into the plant direct its own silencing system (RISC) against it. The fungal sRNAs bind to the plant’s AGO component, leading it to silence some of the very genes that the plant depends upon to protect it from the fungus. Ruthless, indeed. In the war against disease, one should never underestimate the versatility and persistence of the microbial pathogen!