When the Microbe Hits the Metal 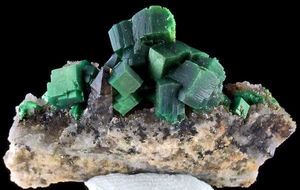 Figure 1. The prism shaped green crystals of Torbernite form as secondary deposits in granitic rocks. They form through a complex reaction between phosphorous, copper, water and uranium. Source

Some heavy metals share a long history with microbes. Many of the metabolic processes that sustain life are believed to have originated from spontaneous reactions involving metals present in the early Earth. Our microbial ancestors figured out quickly how to use those metal catalysts to generate energy and make cellular components. And so catalytic centers were incorporated into proteins to make a wide variety of metal-containing enzymes and diversify their activities. Some of those enzymes were passed down to us and have become integral to our functioning. They are the reason why we, like microbes, require some metals as micronutrients in our diet: zinc, copper, selenium, molybdenum, and cobalt (as vitamin B12).

There are some heavy metals, however, that share little of our ancestral history. There is no known biological role for heavy metals such as cadmium, arsenic, lead, chromium, mercury, and uranium. Not surprisingly, they tend to be toxic to humans. These heavy metals are naturally present in rocks and minerals, but the insoluble nature of the metal formations keeps them tightly bound in the Earth’s crust and minimize their bioavailability. As a result, we rarely come into contact with high concentrations of them. However, anthropogenic activities in the last centuries have released these metals into the environment in forms that are more bioavailable (e.g., soluble in water). During the industrial revolution humans began extracting these metals in large-scale quantities, unaware at the time of the dangers of metal exposure. Mining and factory runoffs containing high concentrations of these heavy metals were released directly into the surrounding waterways. A sad example of the uncontrolled release of toxic metals in the environment comes from the lead industry:  the widespread use of tetraethyl lead (TEL) as a gasoline additive for cars from the 1920s to the 1970s resulted in the massive release of lead to the atmosphere, which can still be detected in many air and roadside samples today.

Paradoxically, the acute toxic effects of large amounts of heavy metals on humans have been documented since the time of the Greeks. Arsenic — lacking color, odor or taste — was considered the king of poisons and was a favorite among the Romans and throughout the Middle Ages! But the toxic effect of heavy metals on individual cells was unknown until in 1893 Karl Wilhelm von Nägeli observed how even relatively small quantities of heavy metals were poisonous to many microbes. He referred to the microbe’s response to the toxic metal as the oligodynamic effect. These studies had enormous implication on sanitation as they led to the use of heavy metals as antimicrobials. Copper surfaces continuously disinfect themselves and are the material of choice in hospitals to prevent the spread of disease. Silver is still used in creams to prevent infection in the wounds of burn patients, although some more recent research has shown that it may be ineffective and equally toxic to individual human cells as to bacteria.

Once inside cells, heavy metal ions bind to the catalytic sites of enzymes and other vital cellular components such as DNA, RNA, as well as structural proteins, which then denature and aggregate. They can also cause damage from the outside of the cells, by binding to components of the cell envelope. Although the exact mechanism of toxicity of heavy metals is still poorly understood, they are all known to interfere with cellular metabolism at some level. Unlike other environmental pollutants such as petroleum, pesticides, or cyanide, heavy metals cannot be broken down into less toxic derivatives. They are often found in polluted environments bound to carbon compounds (organometallics), but even when separated from the organic molecules, the metals remain toxic in their elemental forms.

Unlike us, microbes can respond to environmental changes fast and have evolved mechanisms to combat the toxicity of heavy metals. Some soil bacteria found deep beneath the Earth’s surface have likely been living alongside heavy metals for millennia, and resistant microbial populations have sprung up even in newly-contaminated environments. The 250 years that have passed since the beginning of the industrial revolution provides plenty of time for microbes to adapt and develop cellular defenses against heavy metals. Some microbes have even figured out how to utilize these “toxic” heavy metals as nutrients or as electron acceptors. In the Great Lakes, some algae use cadmium in place of zinc when zinc concentrations are low. Several species of bacteria that can use arsenic for respiration have been identified (arsenic reducers) and others have evolved metabolism to re-oxidize reduced arsenic forms (arsenic oxidizers). Some bacteria can also respire uranium, and the redox cycling of uranium has been reported for both natural and anthropogenic environments containing the radionuclide. 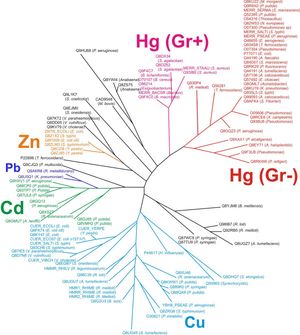 (Click to enlarge) Figure 2. Phylogenetic tree of the MerR family of heavy-metal sensor proteins, with the colors indicating the metal each sub-group of related proteins responds to. Source

Metal resistance by bacteria could offer great insights into strategies to prevent or treat metal poisoning in humans. For some metals, such as arsenic, cadmium, and copper, the main mode of resistance is by active efflux involving protein transporters that pump the metals out of the cell faster than they can diffuse back in. Another strategy is to bind up and sequester the metal ions before they can cause damage inside the cell. The cyanobacterium Synechococcus, for example, secretes a metallothionein called SmtA in response to high concentrations of zinc. Each metallothionein molecule can bind up to four zinc ions, effectively chelating the metal before it can permeate the cell. Some microbes exploit a unique property of mercury to effectively remove it from their environments: in its elemental state, Hg(0), mercury is not only less toxic, it is also volatile. These bacteria actively scavenge and import mercury in its Hg(II) form from their environment using a set of mercury-binding proteins and mercury ion importers. Once inside the cell, the toxic Hg(II) is reduced to Hg(0), which, being a gas, diffuses out of the cell freely.

Cupriavidus metallidurans, an especially spirited bacterium featured previously in this blog for its ability to precipitate gold, has managed to collect at least 25 heavy metal resistance loci on its genome and plasmids. Like its name suggests (“metal-enduring eager for copper”), this tiny daredevil can grow in millimolar concentrations of 20 different heavy metals and even uses chemotaxis to move towards cadmium-rich environments, presumably to escape competition of other bacteria. Sounds ideal for bioremediation!

To help regulate the machinery involved in metal resistance, bacteria often confine the necessary genes to operons that rely on a metal-sensing transcription factor for expression. This allows bacteria to expend energy to fight off heavy metals only when they are around. There are two large families of metal sensor proteins widely distributed throughout bacterial genomes, plasmids, and transposable elements: the MerR and ArsR protein families, named for the metals — mercury and arsenic, respectively — they sense. Since then, a variety of homologues have been discovered that are able to specifically bind to a metal and turn on the corresponding cellular detoxification machinery. Scientists are genetically engineering these metal-inducible operons to construct bacterial biosensors that emit light in response to heavy metal pollution. A sophisticated synthetic biology approach has also been taken to detect heavy metals in water supplies using bacteria immobilized in microfluidic chips, which was the subject of a recent blog post. Biosensors have the potential to be both cost-effective and sensitive, achieving detection limits down to nanomolar concentrations.

Besides making biosensors, bacterial heavy metal resistance systems have found another application in bioremediation. Environments impacted by metal contamination are often vast and, as a result, decontamination approaches are often prohibitively expensive. Sadly, our solution has usually been to fence off the area and leave the heavy metals behind. Bioremediation with microbes presents a more realistic alternative to conventional cleanup methods, as it relies on the in situ stimulation of the activities of the native microbial population to prevent the spread of the most toxic form of the contaminant. There have been encouraging laboratory studies on the use of bacteria for mercury bioremediation by reducing it to its volatile and less toxic metallic form, Hg(0). However, it is important to understand how the environmental bacteria will respond to the stimulation. If stimulated, some bacteria can convert mercury to methylmercury, an even more toxic form of mercury that spreads rapidly in the food chain. This is the chemical responsible for Minamata disease, suffered by the inhabitants of Minamata Bay, Japan, which was severely polluted through the mid-1900s as a result of factory runoff. Methylmercury became concentrated in fish by the process of bioamplification and as a result killed almost 2,000 people and poisoned many more. Luckily, although in this case they may be part of the problem, microbes might have the answer here too. Expressing an organomercury lyase gene from the mercury resistance operon gives bacteria the ability to cleave carbon-mercury bonds and expands the bioremediation targets to include methylmercury. This enzymatic reduction approach to mercury decontamination would still result in the release of elemental mercury into the atmosphere, which is why it may be preferable to express a transgenic metallothionein to promote sequestration of mercury inside cells.

The production of nuclear weapons during the Cold War resulted in multiple areas of uranium contamination in the Unites States. Even among the less radioactive isotopes of uranium, oxidized uranium(VI) is of particular concern because of its solubility in water and subsequent dispersal. In one study at such a uranium-contaminated site, acetate injection into the subsurface stimulated the growth of the natural Geobacter bacteria, which reduced the soluble uranium(VI) to the less soluble uranium(IV). For nuclear waste sites contaminated with both uranium and mercury, Deinococcus radiodurans was engineered to express a mercury resistance operon and was able to detoxify mercury even during exposure to high levels of radiation. Bacterial removal of heavy metals from water by enzymatic conversion to less soluble forms has also been demonstrated for arsenic and chromium. In the case of arsenic, the oxidized As(V) form is less water soluble. Arsenic oxidizing bacteria have been employed as part of water filtration systems, because once arsenic is oxidized, it can easily be filtered out. Similarly, chromium can be efficiently filtered after reduction of Cr(VI) to the insoluble Cr(III) by sulfate-reducing bacteria. These are just some of the many ways in which the mechanisms evolved by microbes to transform metals can be used for our benefit. Fortunately for us, evolution has mastered diverse metal-resistance systems in relatively short time scales. Now it’s up to us to figure out how use these natural systems and reprogram microbes to clean up some of our biggest messes.

Leo Baumgart is a PhD student in the laboratory of Dr. Jeff Hasty at the University of California at San Diego.

Moselio Schaechter on July 21, 2014 at 06:39 AM in Ecology, Physiology & Genetics, Teachers Corner | Permalink