A Tale of Two Strategies

Bacteria are for the most part gregarious organisms, living predominantly in dense communities consisting of multiple strains. In fact, the majority of infectious bacteria occur as multi-layered structures called biofilms, many of which are composed of multiple types of bacteria. As one can imagine, neighbor relations in such complex populations can be tricky. However, since we mostly study pure cultures of individual bacterial strains in the lab, knowledge relating to behavior within a complex population is very scarce. Now Stacy and co-workers elucidated the somewhat thorny relations between two microbial neighbors — one commensal and one pathogenic — in a biofilm community that may be inhabiting your mouth.

Aggregatibacter actionomycetemcomitans (Aa) is a nonmotile, Gram-negative facultative anaerobe that contributes to periodontitis, or gum disease. In a polymicrobial biofilm, Aa is a neighbor of the commensal Streptococcus gordonii (Sg). These two have a love-hate relationship sort of. On the positive side, Aa benefits from Sg by feeding on L-lactate that Sg produces, and has been shown to thrive in the presence of Sg in a murine abscess infection model. But here’s where it gets prickly. Another metabolic end product excreted by Sg is hydrogen peroxide (H2O2), which accumulates to highly toxic levels. In order for Aa to hang around Sg, lapping up the L-lactate it provides, it also has to find a way to avoid its neighbor’s more noxious output, H2O2. How does Aa accomplish this feat?

Biofilms, For a Change

Figure 1. dspB mediates dispersal in response to oxygen. A Qualitative test tube assay for monitoring biofilm dispersal. (1) Aa is initially grown as an anoxic shaking culture to form a ring biofilm (brown), (2) the media is replaced with a larger volume, (3) the culture is further incubated under anoxic (‒O2) conditions, and (4) detachment is assessed after crystal violet above the initial biofilm (#1). B Representative result of the test tube assay.

The researchers reasoned that the answer lies in genes that are upregulated during aerobic respiration, since this is the condition under which H2O2 is generated. So, using DNA microarray analysis, they compared the Aa transcriptome under both oxic and anoxic growth. As predicted, genes known to be involved in responses to H2O2, including katA (encodes a catalase that detoxifies H2O2) and apiA (encodes an adhesin), were induced by oxygen. To their surprise, they also found that dspB, a gene encoding the biofilm dispersing enzyme Dispersin B (DspB), was coregulated with kat A and apiA. DspB helps degrade the biofilm matrix, allowing cells to detach and disperse from the colony. They also observed that a sequence near the dspB promoter is similar to the binding site for OxyR, which is the transcriptional regulator of katA and apiA in response to H2O2. When they inactivated this site, dspB was no longer induced under high oxygen conditions, indicating that dspB is regulated by the same factor as katA and apiA. This finding added further support to their hunch that DspB-mediated dispersal plays a role in allowing Aa to deal with H2O2 secreted by its neighbor, Sg. But how would this work?

To compare what happens to an Aa biofilm in the presence and absence of oxygen, the researchers came up with a simple yet ingenious test tube assay (Fig. 1). Here’s how it works: a shaking liquid culture of Aa grown under anoxic conditions forms a biofilm ring on the test tube just where the liquid reaches its maximum height. The researchers reasoned that if they now added liquid to this tube and shook it under oxic conditions, DspB would be induced, allowing the cells to detach from the biofilm and form a new ring, higher in the tube. This is indeed the behavior they saw. Focusing now on the role of H2O2 in dispersal, the team compared biofilm mass formed under oxic conditions in the presence or absence of H2O2 (Fig. 2). They saw that addition of H2O2 induced Aa biofilm dispersal in a DspB-dependent manner, since dispersal occurred in a strain that carried the dspB gene, but not in a strain lacking dspB. 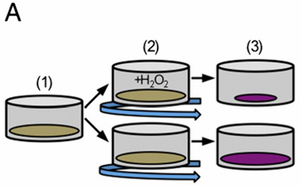 Figure 2. dspB mediates dispersal in response to H2O2. (1) Aa is incubated statically under anoxic conditions to promote attachment to the bottom of microtiter dish wells, (2) biofilms are incubated under oxic shaking conditions either with (+H2O2) or without H2O2 addition, and (3) biofilm mass is quantified using crystal violet.

Back to the issue of neighbor relations. The researchers found that when Aa and Sg were grown in mixed-species biofilms under oxic conditions, transcription of Aa dspB (just like that of katA) was enhanced compared to monoculture growth. Furthermore, this enhancement was mostly due to Sg-generated H2O2, since inactivation of the Sg gene responsible for H2O2 production resulted in levels of Aa dspB transcription similar to those found in Aa monocultures. These various results led the researchers to hypothesize that Aa uses the combined forces of the H2O2-destroying catalase (from katA) and Dispersin B (from dspB) to fend off, and flee from, Sg-excreted H2O2. In this way, Aa avoids being killed by one product of Sg while prospering from another (L-lactate).

Of Mice and Synergy

In order to test their theory at an actual infection site, in this case a mouse abscess infection, the researchers counted the number of bacteria in abscesses formed with Aa WT, Aa katA-, or Aa dspB-, alone or in the presence of Sg, after three days of growth (Fig. 3). As expected, Aa numbers were higher when Sg was present, but only in the WT strain. In contrast, the katA- and the dspB- strains showed no enhanced persistence in the presence of Sg, although when grown alone, the mutant strains grew as well as or better than the WT strain. Surprisingly, they also found that Sg itself grew more poorly in coinfection with either Aa katA- or dspB-, leading them to hypothesize that perhaps Aa cross-protects Sg, which does not produce its own catalase, from self-inflicted oxidative damage. Thus, the synergy between Aa and Sg appears to be of a mutualistic nature. 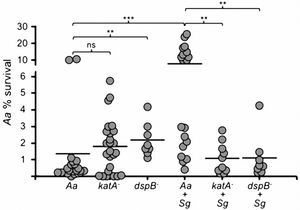 What role does DspB play in this scenario? Remember that the researchers had hypothesized that DspB enables Aa to distance itself from H2O2-producing Sg. To test this, they generated abscesses using strains of Aa and Sg expressing a green and a red fluorescent protein, respectively, so that the two strains could be distinguished. Under a confocal microscope, they saw that both strains grow as small, dense aggregates. When they measured the distance between the aggregates, they found that Aa WT aggregates were located 4 ‒ 13 µm away from Sg aggregates. Aa dspB- aggregates, however, were either right alongside or within 4 µm of Sg aggregates. These results show that DspB enables Aa to put some distance between itself and its H2O2-excreting neighbor, affecting the organization of the biofilm community. The authors cleverly characterize Aa’s handling of Sg-produced H2O2 as a “fight-and-flight” response: catalase directly detoxifies H2O2 (fight), and DspB allows Aa to move a safe distance from the source (flight).

This study reveals something of the complex dynamics that can play out between residents of a mixed-species biofilm. Interestingly, Aa’s two-pronged fight-and-flight response to oxidative stress also appears to confer benefits to Sg, which grows better when the Aa genes encoding this response are intact. The remarkable synergy between these two neighbors serves to enhance the fitness of the biofilm community as a whole. Now everyone is happy... except the unfortunate host!