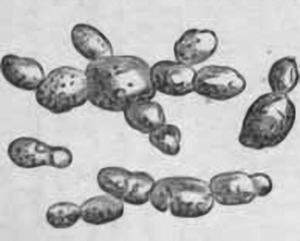 The mystery of alcoholic fermentations was uncovered in the first half of the 19th century by Cagniard-Latour (1837) in France, and Schwann (1837) and Kützing (1837) in Germany, based on microscopic studies but not without controversy. The great German organic chemist Justus Liebig did not like the idea that alcoholic fermentation involved living things and fought vehemently against it. Chemistry sufficed. With Liebig’s help, his associate Friederich Wöhler (famed for his synthesis of urea) wrote a spoof on the proposal that yeast is the cause of fermentation and published it anonymously in 1839 in the journal that he and Liebig edited, “Annalen der Pharmacie” (vol. 29, pp. 100–104). This journal later became the august “Liebig’s Annalen der Chemie.” The article was entitled “The Mystery of Alcoholic Fermentation Unraveled” (“Das enträthselte Geheimniss der geistigen Gährung”). It took Pasteur to champion the cause of yeast and to lay the matter to rest. But Wöhler and Liebig had their mischievous fun while it lasted. Here is some of what they wrote: 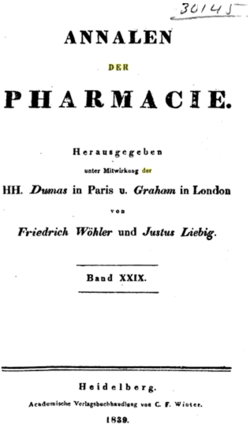 “I am in the process to develop a new theory of fermentation. I can now explain this hitherto quite incomprehensible form of decomposition in the simplest possible manner and now consider the matter fully explained…. For this I am indebted to the use of an excellent microscope….

When beer yeastis suspended in water and observed under the microscope, it turns into an incredible number of minute spherules, hardly 1/800th of a linie(ed.: an old German measure of length, ca. 1/10 inch) in diameter, and into fine threads that may be some type of protein. When these spherules are placed in a sugar solution, it becomes obvious that they are the eggs of small animals, for they swell, burst, and develop into minute creatures that begin to multiply unimaginably fast. They differ in shape from any of the 600 known kinds of animals. They look like a Beindorf's distillation apparatus without the condenser (ed.: meaning that yeasts look like a miniature of the vessel used for fermentation in the lab.)…. The tube on their head is some type of sucking device, lined inside with bristles 1/2000 of a linie long. I could not identity teeth or eyes. These animals possess a stomach, intestines, anus (a pink colored dot), and urinary organs. From the moment they hatch, they begin to devour the sugar from the solution, which can clearly be seen entering the stomach. In the blink of an eye, it is digested, and the digested products can be recognized with assurance from the excrement….

...In a word, these creatures eat sugar and excrete alcohol from the intestinal tract and carbon dioxide from their urinary organs. The bladder, when full, looks like a champagne bottle, and when empty, like a small ball. With little practice, a gas bubble can be seen inside each animal expanding to 10 times its original size. It is emptied by a kind of screw-like motion brought about by rings of muscles on the outer part of its body. I believe it very likely that the same effect is witnessed here as in the case of galvanic electricity passed through a metal wire….

...To give an idea off the enormous voracity of the creatures, we quote Thénard, who says that 3 parts of beer yeast can transform 200 parts of sugar into alcohol and carbonic acid. The excrements they produce in 18 hours weigh nearly 66 times their own weight…. As soon as the animals run out of sugar, they begin to eat up one another…. From the anus of the animal one can see the incessant emergence of a fluid that is lighter than the liquid medium, and they squirt at very short intervals a stream of CO2 from their enormously large genitals…. If the quantity of water is insufficient, i.e. the concentration of sugar too high, fermentation does not take place in the viscous liquid. This is because the little organisms cannot change their place in the viscous liquid: they die from indigestion caused by lack of exercise.”