Evolution is largely driven by conflict, not collaboration, according to cell evolutionist Harmit Malik at the Fred Hutchinson Cancer Research Center (FHCRC). Mammalian cells are contentious places, he explains, populated by alien and host genomic sequences fighting for dominance. "In the competition between one gene faction and another, the side that most recently changed — the genomic mercenary or the host — temporarily wins putting a constant evolutionary pressure on the losing side to change as well," Malik says. (For details see here.) As the Red Queen in Through the Looking Glass said (albeit about something entirely different): "Now, here, you see, it takes all the running you can do, to keep in the same place." "Both parties have to rapidly evolve to restore the status quo or run the risk of extinction and that" the essence of a classic Red Queen arms race," Malik adds.

The Focus Has Been on Viral Intruders… 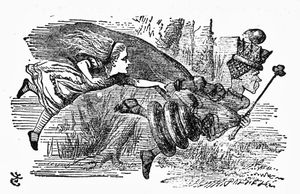 Figure 1. The Red Queen and Alice (from Carroll’s Through the Looking Glass)

"Some viral genetic elements have accidentally crashed into their host chromosomes only once, while others have inserted themselves repeatedly, resulting in large families of closely related alien sequences peppered throughout the genome," says Cédric Feschotte, at the University of Utah. The best studied "selfish aliens" are endogenous retroviruses (ERVs), left by wave after wave of ancient invasions. Notably, primate genomes are littered with hundreds of thousands of ERVs that make up an estimated 8% of human genes.

However, the new science of paleovirology reveals an array of other ancient viral footprints in vertebrate genomes; for example, modern-day elephants carry ghosts of Bornavirus infections that date back more than 90 million years and filovirus fossils in rodent genomes are estimated to be at least 30 million years old. Ancient hepadnaviruses (hepatitis B) and flaviviruses (West Nile and hepatitis C viruses) also left their footprints in modern vertebrate genomes. "The conflicts between such viral intruders and host genes shape many fundamental aspects of biology and acknowledging their importance provides a more complete picture of evolution as well as offering novel avenues of research", according to Malik. (For details see here.)

…But Our Resident Bacterial Symbionts Can Be Contentious as Well

A small group of dedicated mitochondriacs are venturing beyond alien viral sequences and discovering that our bacterial "endosymbionts" are not as genetically congenial as we once thought they were. Not surprising though, mitochondria are descendants of marine alphaproteobacteria which are still among the most successful sea-faring predators on Earth. 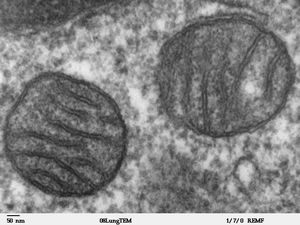 Early on, alphaproteobacteria evolved biochemical tricks enabling them to thrive in an oxygen-rich world and began preying on other less metabolically gifted cells. Then, about 1.5 billion years ago, an enterprising alphaproteobacterium embedded itself in an archaeon — this being the most cherished scenario — and, in order to further exploit their hosts, its vertically transmitted daughter cells became less virulent over time.

Eventually both predator and prey recognized the relationship as mutually beneficial and the little alphaproteobacterium became an ‘endosymbiont.’ Once cells acquired an internal power source — a bacterium that generates ATP (adenosine triphosphate), biology’s universal fuel — they were bound to become larger and more complex; in other words, eukaryotic. Without this singular event of a relatively "tame" alphaproteobacterium invading a receptive archaeon, the Earth would still be wholly and solely inhabited by single cells. Even more amazing, because eukaryotic cells appear to have evolved only once, all true multicellular organisms on Earth — plants, animals, fungi, and algae — are related.

However, the original alphaproteobacterium that invaded and set up shop in an archaeon might not have been so tame after all. Douglas Green at St. Jude Children’s Research Hospital in Memphis conjectures that the first proto-mitochondrion might have carried lethal baggage into its new host in the form of a "killer cassette;" a plasmid carrying genes for a pore-forming toxin and another for its antidote. "Such mobile genes are common today and likely long-used weapons for hunters like alphaproteobacteria," he notes."If, as it’s widely believed, most mitochondrial genes that weren’t just thrown in the biological trash bin were transferred to the host nucleus, then the stress-induced toxins generated by these nuclear mitochondrial genes would be aimed at the nearest bacterium — a cytoplasmic mitochondrion, rupturing its outer membrane and causing a cell-killing bioenergetic catastrophe." 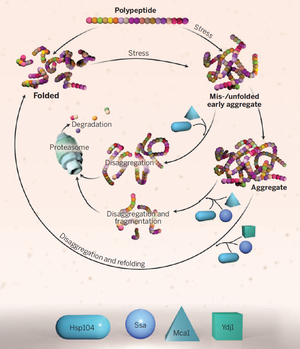 Figure 3. Defense against protein damage. Stress-damaged proteins that form aggregates in cells can be reactivated with the Hsp104-Ssa-Ydj1 chaperone machinery. Mca1 may act in parallel by binding to misfolded proteins during early stages of aggregation for proteasomal degradation (this is independent of Mca1’s enzymatic activity). Alternatively, Mca1 may associate with misfolded proteins formed at late stages of aggregation (together with Hsp104 and Ssa), helping to disentangle the aggregates by its protease cleavage activity before shunting them to the proteasome for degradation. Source

Thus, the cell death mitochondria are reputed to enforce isn’t as altruistic as has generally been thought and, in fact, bioenergetic catastrophe looks more like murder than suicide. But the whole nasty business releases cytochrome c from the mitochondrial inter-membrane and this sets off apoptosis which, in contrast to energetic catastrophe is fast and efficient; an asset in the defense against intracellular parasites. New findings from Thomas Nyström’s lab at the University of Gothenburg in Sweden also challenge the idea that cells sacrifice themselves to provide nutrients for younger and fitter community members. Their work with the yeast Saccharomyces cerevisiae "suggest that from an evolutionary perspective, caspase activation is a protective response that helps cells survive the toxic stress caused by misfolded proteins," comments Harm Kampinga from the University of Groningen in the Netherlands. When activated too strongly the caspase activity can become nonselective and result in programmed cell death.

What’s more, having separate genomes within the same cell is asking for trouble. Natural selection can force mitochondria to fight among themselves as well as against the host with no consideration of the long-term consequences, says Nick Lane of University College, London. There are tens to hundreds of mitochondria swimming around in a single cell and they all divide independently offering ample opportunity for conflict. 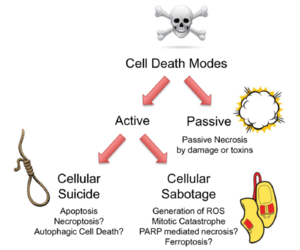 An attempt to avoid genetic conflicts may be a reason that most mitochondria are inherited from one rather than both parents; usually the mother, putting male mitochondria at an evolutionary dead end. "Mitochondrial genomes are under selective pressure to protect and enhance female interests only," Malik asserts. "They cannot evolve in male-specific ways and improvements will not be passed onto the next generation." This might be a reason males seem to wear out sooner than females and mitochondrial diseases tend to be worse in men. Thus, Malik predicts "an eventual transition from symbiosis to sexual conflict" as male mitochondria fight for their rightful place in genomic evolution.

Editors’ Note: This is the seventh in an ongoing series about cells and processes that might not come immediately to mind when you think "microbe." The first six in our "Oddly Microbial" series by Marcia Stone can be found here: Ribocytes; Cancer cells; 86-Million Year-Old Deep Seabed Mystery Cells; Prions; Programmed Cell Death; and Giant Viruses.

*This article is dedicated to Richard Dawkins who somehow figured all this out before the technology was available to even suggest it. True genius.

Marcia Stone is a science writer based in New York City.