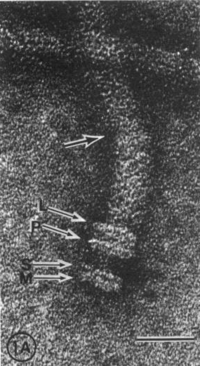 Figure 1. The structure of the E. coli flagellum basal body revealed. Both the top and bottom edges of the L and P (top two) rings are seen, giving them a circular appearance. The top arrow marks the junction between the hook and the filament. The bar is 30 nm.

The end of bacterial flagella that is near the cell is a marvel of mechanical miniaturization — a molecular wheel that turns, just like the axle of a car.  The assembly consists of a stator, the part that holds it in place, and a rotor, the part that turns. The rotor is a beautifully complex structure consisting of a basal body and a hook to which the flagellar filament is attached.  Several dozen proteins are involved. And it self-assembles!

Before an inspiring paper by DePamphilis and Adler appeared in 1971, the details of these structures were confusing, in part because the preparations used for electron microscopy often contained contaminating fragments of the cell envelopes. These authors devised a novel purification scheme that included as its steps ammonium sulfate fractionation and CsCl centrifugation.  With such purified material, they could examine the structural details of this fascinating cell constituent of both E. coli and Bacillus subtilis.

In brief, this is what they concluded: The basal body from E. coli is 27 nm five and consists of four rings 22.5 nm in diameter, arranged in two pairs and mounted on a rod. The top pair of rings is connected near their periphery, resembling a closed cylinder. These rings serve both to insert the structure in the outer and inner membranes and to keep it in place.  The B. subtilis basal structure is simpler, having only two rings, which reflects the single cell envelope layer of the Gram-positives and the need to insert into one layer only. 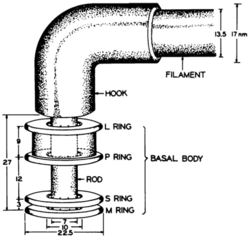 Figure 2. Model of the basal end of a flagellum from E. coli. Dimensions are in nanometers.

But let’s be careful. As the authors stated: A critical question is whether a vital component was lost when the "intact" flagellum was isolated. Until the flagellum can function in an in vitro system, one cannot prove it was prepared in its complete form. Therefore the possibility remains that a fragile or unattached component of the flagellar base is missing in our preparations. But in general terms, the model proposed by DePamphilis and Adler has stood up rather well under intense molecular scrutiny. For a view from David DeRosier's lab of the structure of the flagellar basal body in its full splendor, click here and here. Also here for a fine recent review on this topic.