« TWiM #85: Oscillation in the Ocean and a Verona Integron | Main | The Curious Case of a Protein and a Pilus » 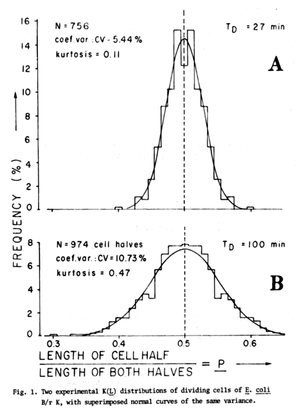 In Talmudic Question #112, the question was asked: "Many, perhaps most bacteria, divide into daughter cells of almost precisely the same size. Why is that?"

An answer may be found when measuring the precision of cell division as a function of cell shape. The precision of cell division is given by the coefficient of variation (CV) of the ratio of the lengths of prospective daughter cells to the lengths of constricting cells (the so-called K(L) distribution; Trueba, 1982). This CV varies with the shape of the cells as defined by the cell's aspect ratio between average cell length and cell diameter (L/2R).

If nucleoid occlusion plays a role in signaling cell division, the positioning of the whole, duplicated nucleoid in the cell will influence the site of division. As evident from the images of the cells in Fig. 2, that have about the same cellular volume and the same DNA-mass, the nucleoid has less space along the length axis of thicker the cell (Fig. 2A) than of the thinner cells (Fig. 2B), for geometrical reasons. Trueba (1982) suggested that if the position of the nucleoid in the cell is more variable, so will be the site of cell division. As far as I know this has not been measured directly using, for instance, DAPI-stained, living cells.

The suggestion is only valid if the DNA mass is equally dispersed within the volume of the nucleoid; another Talmudic question?

Trueba FJ (1982). On the precision and accuracy achieved by Escherichia coli cells at fission about their middle. Archives of microbiology, 131 (1), 55-9