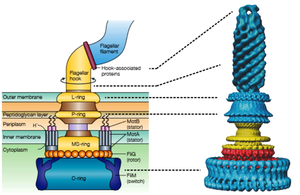 Figure 1. The bacterial flagellar motor is a rotary motor driven by the flow of ions across the cytoplasmic membrane. Its purpose is to rotate the long helical filaments that protrude from the bacterium and propel it to swim. The diagram on the left depicts a typical Gram-negative flagella basal body; the L- and P- rings are associated with the outer membrane and peptidoglycan layer. In Gram-positive bacteria, flagellar basal bodies lack the L- and P- rings. Source. The image on the right is a three-dimensional reconstruction of S. enterica flagellar motor obtained by cryo-electron microscopy. Source

I have the grating feeling that the subject of self-assembly of complex biological structures may not always amass the level of respect it deserves. I reckon that its importance is generally appreciated but, as topics go, it tends at times to be set aside. Yet, this is one of the most magnificent aspects of biology, one that beautifully combines logic with mechanics and attests forcibly to the power of evolution. And it goes back a ways. The pioneering study on the self-assembly of phages played an integral role in the development of molecular biology.

Today, the assembly of the bacterial flagellar motor rates high on the list of exciting self-assembly phenomena, possibly vying with that of viral structure (for an example of the latter, see here). The motor is a key constituent of bacterial flagella. It is located at the base of the structure and is responsible both for anchoring it to the bacteria and providing the mechanism for its rotation. It is a structure with many components, and its assembly constitutes an amazing engineering feat. One of the earliest indications of its complexity was recently exposed in these pages. Going back to 1971, purified flagella were convincingly shown to have an intricate base, consisting of several rings presumed to anchor the flagellum to the bacterial envelopes in a rotor-stator arrangement. This structural design for a molecular machine delightfully explained how flagella could both rotate and be kept in place.

Time passed since this spectacular early imagery, and with it came the development of techniques of previously unimaginable power. High among these is electron cryotomography, a way to reveal the 3D arrangements in unfixed biological material under the electron microscope. This is somewhat analogous to a CAT scan but instead of the optical sections being parallel, they are produced by tilting the specimen at various angles. With this technique, along with the computerized analysis of single images (electron cryotomography and subtomography averaging), one can observe structures at "macromolecular" (several nanometer) resolution. In other words, in exquisite molecular detail. The elements of the flagellar motor, the various rings, the center rod, the stator component, and what is known as the export apparatus, are now revealed in glorious detail. It’s like looking at the wheel assembly of a car reduced about 10 million-fold. 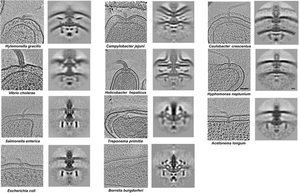 Now comes a surprise. One would expect that such a complex structure be the product of an uncommon event in evolution, consequently, that it be alike in different bacterial species. Not so. A most exciting detailed analysis of eleven different species shows that although the basic plan is the same, these tiny machines vary considerably in detail. Their elements differ in curvature and in the positioning with regard to the axis. True, the bacteria species chosen included an assortment of their flagellar arrangement, the flagella being polar in some, all over the surface (peritrichous) in others, and in yet others encased in the periplasm. One can well imagine that such different arrangements might require specially adapted machinery. But this finding does reveal a great degree of plasticity in the way flagellar motors are made. Isn't this amazing?

Self-assembly requires a high degree of "smartness" by the molecules involved — a higher degree than found in our "smartphones" that are all but self-assembled. Not only must the whole bunch of molecules carry out their intended function, they must be able to join with others into highly sophisticated ultra-tiny machines. Even more fascinating is that this self assembling ability is self-evolved! If I were starting over and wanted to dedicate myself to molecular mechanisms, I would be likely to turn to the study of such smart molecules.