The Curious Case of a Protein and a Pilus

The Root Of Our Routine 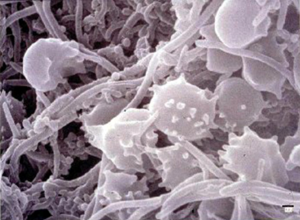 Figure 1. What’s in that smile? Scanning electron micrograph of a dental plaque. Source

If you’re like me, every morning you reluctantly roll out of bed and automatically reach for your toothbrush. One of the earliest learned practices of personal hygiene, brushing surely serves more than just preventing daybreak halitosis — but have you ever pondered about the plaque you try to dislodge from your teeth day in and day out? What is plaque, and why do we want to get rid of it?

Plaque is a living community of microbes attached to the smooth surface of our teeth as a biofilm. We must buff our teeth regularly because (fun fact!) teeth are the only part of the body that is not constantly shed. This makes it possible for microorganisms to remain adhered to the surface of our chompers for long periods of time. When not regularly removed, oral biofilms grow to contain thousands of different species: they are among the most complex biofilms known to date. The result of this bustling microbial community: calcifications (tartar), tooth decay, and gum disease, all of which can lead to greater health problems.

The composition of oral biofilms varies between locations in the mouth. Each habitat differs in colonizing species and patterns of gene expression.  Mechanically removing plaque with brushes and floss is a good idea because biofilms are remarkably resistant to antibiotics — the inner layers of the biofilm may never see what the surface microbes are exposed to. Read more about biofilm formation here. 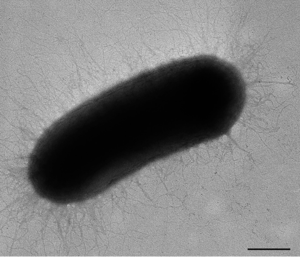 Biofilms would not be biofilms if bacteria didn’t co-aggregate. Bacterial virulence factors — adhesins — mediate adherence to surfaces and to other bacteria, thus fomenting biofilm development. Two early colonizers of the oral biofilm are Actinomyces oris and Streptococcus oralis, which attach to both proline-rich proteins on tooth surfaces and to each other via Receptor PolysaccharideS (RPSs). Adhesins are anchored to the bacterial cell wall by enzymes called sortases, which recognize not only an N-terminal signal peptide for export but also a C-terminal cell wall sorting signal (CWSS). Some of these CWSS containing proteins are assembled into fimbriae (aka pili) by specific sortases.

A. oris possesses two kinds of fimbriae, Type I and Type II, both important for cell-cell interactions with S. oralis. These fimbriae interact with S. oralis via receptor polysaccharides on the cell surface. In a new report, Reardon-Robinson et al. chose to study Type II fimbriae for clues as to how these protein structures mediate biofilm formation and virulence. Two proteins, FimA and FimB form the shaft and the tip of these structures respectively.

Preliminary observations yielded interesting results:  coating Type II fimbrae with specific antibodies raised against the whole pilus lowered the interaction with S. oralis. This made perfect sense as these antibodies recognize the fimbria and prevent them from interacting with receptors on the surface of S. oralis. Strangely though, when antibodies specifically raised against FimA or FimB proteins were added to a culture of A. oris and S. oralis, the two species still co-aggregated. How does this make sense?

Figure 3. Type II fimbriae in A. oris have either CafA or FimB as tip fimbrillins. Source

These experiments suggested the presence of a yet unidentified surface protein that mediates co-aggregation. Researchers analyzed the A.oris genome for proteins that may have adhesive functions and contain an LPXTG motif that would be recognized by sortases. Fourteen candidate proteins were discovered and subsequently individually deleted from the A. oris genome. Deletion of only one of the fourteen proteins disrupted interactions with RPS+ S. oralis cells. This factor was named Coaggregation factor A or CafA.

The discovery of CafA explains why the anti-FimA and anti-FimB antibodies fail to inhibit co-aggregation.  These antibodies do not bind to CafA, thus allowing this newfound factor to continue mediating specific interactions between the two bacteria. As expected, antibodies raised against CafA blocked A. oris co-aggregation with S. oralis.

Interestingly, the phenotype of cafA deletion is identical to the phenotype of fimA in respect to the RPS dependent coaggregation of A. oris with S. oralis. However, unlike the deletion of fimA, deletion of cafA leaves Type II fimbriae unaffected and does not influence biofilm formation. In another test, the investigators observed A. oris adhesion to red blood cells. While wild type A. oris causes severe hemagglutination or cell clumping, deletion of CafA does not. Yet, CafA is part of Type II fimbriae and depends on functional FimA. Intriguingly, FimB is not required for CafA to localize to the fimbriae, suggesting that CafA replaces FimB at the tip of the pilus. To verify this, the authors performed immunoelectron microscopy by labeling CafA and FimB using different sized antibody-bound gold particles.  CafA was indeed found at the tip of Type II fimbriae, as was FimB. However, via a pull down assay with recombinant his-tagged CafA and FimB, the two were not found together on the same fimbria. The FimA shaft contains either CafA or FimB. Such tip proteins are called tip fimbrillins(Figure 3).

Figure 4. Scanning electron micrograph of Actinomyces israelii, the leading cause of actinomycosis. This infection causes abscesses on the face and neck.

CafA is highly conserved in many Actinomyces species, which means that its discovery could lead to therapeutic innovations. Members of this genus cause actinomycosis, a condition that forms abscesses in the mouth, lungs, and gastrointestinal tract. This disease is most often caused by Actinomyces israelii (figure 4), which can also cause endocarditis.

Once again, the point of brushing your teeth is to reduce the chances of biofilm-induced disease. You have heard from your dentist that “sugar causes cavities.” The oral biofilm is the middleman in this reaction. The network of A. oris and S. oralis allows secondary colonizers to adhere to the tooth surface. As time progresses these bacteria lower the pH of the biofilm through sugar fermentation, allowing acid-tolerant species to colonize, subsequently causing tooth enamel demineralization.

Health of the oral biofilm has also been associated with the overall health of the host. Once pathogenic species such as P. gingivalis or those in the genus Spirochaeta colonize the biofilm, they cause gingivitis that can progress into advanced periodontal disease characterized by alveolar bone and tooth loss. There is a greater likelihood of finding spirochetes or P. gingivalis in the healthy non-oral tissues of periodontal diseased patients, confirming that oral disease is not just a localized problem. Understanding how virulence factors like CafA mediate the initial step of biofilm formation may lead to the discovery of preventive therapies for oral and even whole body health.

The discovery of CafA leaves us with a couple questions. CafA can link directly to the cell wall, so why is it found at the tip of Type II fimbriae? It may be that this allows cells to interact even at longer distances and does not require cells to come directly into contact with one another. Furthermore, how is the incorporation of CafA and FimB into the tip of Type II fimbriae regulated?  The fim genes belong to an operon, but the cafA gene is not found at that locus. One thing is certain; the discovery of this tip-hijacking coaggregation factor has opened the door to further study on oral biofilm genesis and assembly.

And don’t forget: keep on brushin’.

Monika Buczek is a Biology Ph.D. student in the Janakiraman Laboratory at the City College of New York.