The world of lipids does not always gets its due. Their oleaginous charm is not always appreciated, as we said here before. For example, have you heard of hopanoids? They are made by some bacteria and are an unusual kind of polycyclic lipids that resemble steroids, but with an ex­tra ring. Just like cholesterol in eukaryotic membranes, they insert in bacterial membranes where they contri­bute to their stability. Both hopanoid and steroid mole­cules are almost planar, thus can intercalate into the lipid bilayers with relative ease and there interact with the adjacent fatty acid chains to enhance stiff­ness. That hopanoids and steroids play analogous roles can be readily shown in mycoplasma, the bacteria that have the unusual ability to incorporate exogenous steroids in their membranes. My­coplasma mycoides, it turns out, can grow without steroids if provided with hopanoids. Not all bacteria make hopanoids, but they play a vital role in the ones that do. How do we know? Inhibit­ors that stop their synthesis also inhibit the growth of the organisms that make them. Hopanoids are found in trace amounts in some plants and not at all in the Archaea. For a review, see here, and for previous appearances in this blog, here for a piece by Tanja Bosak and here for one by Paula Welander.

Hopanoids are complex molecules, decked out with a large variety of side chains characteristic of the species that makes them. Why such a diversity? Not enough is known about this to be able to figure out if there are rules that govern this. Is this related to requirements imposed by their en­vironment? Puzzling is that within closely related species, some make them and others don't. For example, some nitrogen-fixing bacteria in the genus Azotobacter produce hopanoidsbut close relatives (e.g., A. chroococcum) don't.

More is known about the hopanoids physiological roles. They help membranes withstand damaging stress con­ditions, among others high temperatures, low pH, and detergents. Hopanoids usually comprise around 1 – 5% of the cells' total lipids, but in some cases their proportion raises considerably in response to stress. Thus, they make up about 50% of the lipids in Zymomonas, a bac­terium that vies with yeast for a high level of alcohol production. More examples: the thermophile Bacillus acidocaldarius makes about seven times more hopanoids at 65 °C than at 60 °C. At high temper­atures, hopanoids may counteract the increased fluidity of the lipid portion of the membrane and thereby reinforce it. One interesting use for hopanoids is seen in the actinomycetes, bacteria that make filaments that stick out into the air. This aerial mode of life calls for special membrane pro­perties that may be related to their hopanoid content. Moreover, hopanoids have been seen in Bacillus subtilis in the act of sporulation. 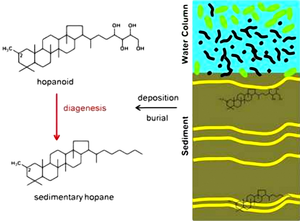 Figure 3. The biomarker principle involves the burial and preservation of bacterial lipids such as hopanoids in the sedimentary rock over billions of years. Diagenesis describes the chemical, physi­cal, or biological changes undergone by sediment after its initial deposition. Bac­teria present in the water column die and are deposited and buried in the sediment where they undergo degradation. Hopan­oid molecules lose the majority of their functional groups but the basic hopane structure is preserved over billions of years. Geochemists are then able to extract and detect these lipids in ancient sediments. Credit: Paula Welander. Source

There is something well nigh incredible about hopanoids and steroids: they are found in very ancient rocks. The hopanoid rings are amazingly stable to acid and alkali conditions and high temperatures, so that when rocks and petroleum were formed, they were among the few organic molecules that survived. This may have taken place as long as 1.64 billion years ago. In the process, hopanoids were stripped of some of their side chains, leaving a simple hydrocarbon skeleton behind. With all this time in the history of the planet, hopanoids accumu­lated in spectacular amounts, perhaps as much as 1012 tons. This makes them enormously abundant and equal in mass to the organic compounds of all organisms now living. Almost certainly, they represent the largest mass of any single class of organic molecules on Earth. And yet, they are unfamiliar to most people, in and out of science.

Hopanoids – especially with a 2-methyl substitution – serve as biomarkers, that is, as indicators of the extinct organisms that existed at a given geologic time. Notice how useful it could be to be able to rely on such markers, especially because the evidence based on the morpholo­gy of fossils is often controversial. The notion has been around for some time that 2-methyl ho­panoids tell us that the earliest photosynthesizing microbes, the cyanobacteria were present at the time rocks were formed. Given the importance attributed to ancient cyanobacteria in forming atmospheric oxygen, this is a key event in the history of the Earth. 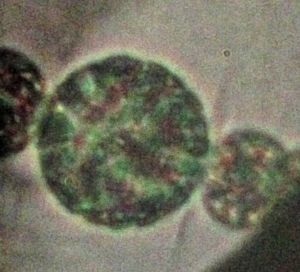 But there are problems with this idea. Some bacteria other than the cyanobacteria also make hopanoids while growing anaerobically, thus not producing oxygen. In addition, cyanobacteria differentiate into resting cell, "akinetes," and these produce ten times the amount of hopanoids as vegetative cells (Fig. 4). They are found in greatest amounts in the akinete outer membrane (which is also the preferred localization in other bacteria). This suggests that hopanoid protection kicks in when cells become desiccated or exposed to prolonged cold, which does not support an exclusive role for them in photosyn­thesis. Thus, they do not serve too well as biomarkers for ancient oxygenic photosynthesis. All is not lost: they may serve as indicators of other biological attributes. Their presence may indicate that olden-day cyanobacteria were already capable of differentiation into akinetes, thus pointing to this being an ancient skill indeed.

Looking for something else that hopanoids may tell us about early life does not stop there. The group of Ricci and colleagues went about it in a systematic way and assayed for 2-methylhopan­oids in a large number of bacteria. Instead of looking for hopanoids directly, they assayed meta­genomes from various terrestrial and aquatic sources for hpnP, the gene encoding C-2 hopanoid methylase, and shc, the gene for squalene hopane cyclase, both involved in their synthesis. In­deed, these genes were found mainly among the alphaproteobacteria. Surprisingly, most cyano­bacteria, once thought to be great 2-methylhopane producers, do not have the hpnP gene. Per­haps the ancient cyanos did, but the data do not encourage such a view.

So how common are these hopanoid-related genes? They are relatively infrequent, being seen in only about 4% of the metagenomes analyzed. The majority, 63% of all these, are represented by terrestrial species. This conclusion should not make paleomicrobiologists particularly happy be­cause although the fossil record suggests that 2-methylhopane producers lived in shallow tropical seas, they are not enriched in such habitats today. Today, genes for 2-Me-hopane is found in a great many habitats, which does not help in the interpretation. But one fact emerges: About half of the hopanoid formers are associated with plants in a mutualistic or commensal association. Note that plants evolved some 500 million years ago, so this has little to do with the oldest find­ings of hopanoids. But these habitats, ancient, and not-so-ancient may have something in com­mon: they supported sessile bacterial communities (biofilms?) that are at low oxygen concentra­tions. The paper discusses various types of biases in such studies, concluding that the main inter­pretations still hold.

In conclusion, hopanoids and their role in evolution need more work, which is easy enough to say. Like in all of science, as older ideas wane, new ones take their place. In this spirit, the authors say: "our ecological data demonstrate that 2-MeBHPs (bacteriohopanepolyol) cannot be used as taxo­nomic biomarkers for any particular group but suggest 2-MeBHPs may be diagnostic for the con­fluence of particular environmental parameters."

In the words of Tanja Bosak in these pages: "In the beginning, there were fats, and in the end, only fats will remain."