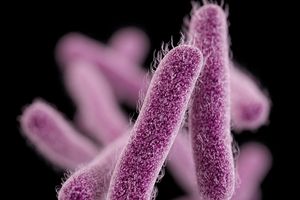 Intracellular pathogens face many daunting problems, among them how to obtain enough energy and nutrients for active growth while, preferably, keeping the host cell alive for as long as possible. This issue is especially acute for pathogens that grow at a fast rate and reach large numbers. When they succeed at this task, however, these fast-growing pathogens often cause serious infectious disease. A fine example of an organism with marked strategic skills is Shigella flexneri, the agent of life-threatening bloody diarrhea. This is the endemic form of shigellosis or bacillary dysentery that is prevalent among children in developing countries and results in the highest mortality rate for diseases caused by members of this genus. Infection begins when a small dose of 10 ‒ 100 bacteria reaches the human colon epithelial cells, where it progresses to very high loads. This rapid proliferation is achieved in part via a plasmid that delivers several virulence factors through a Type 3 secretion system. These factors include the Invasion Plasmid Antigen Proteins (Ipa's) that facilitate entrance of the bacteria into host cells, and IcsA, which triggers actin polymerization in the host cell, helping cell-to-cell spread of the pathogen.

The cytoplasm of human cells is rich in nutrients by the hundreds. But which ones does S. flexneri utilize in order to grow so fast and abundantly? So far, there has been little by way of an answer. Kentner et al. now address this issue and also ask how host cells remain viable in the face of a large pathogen burden. These investigators infected HeLa cells with a strain of S. flexneri mutant in IcsA that is incapable of spreading between host cells, thus reducing the complications of a more natural system. They determined that the intracellular growth was unusually rapid, with a doubling time of about 37 minutes, resulting in more than 100 Shigella per HeLa cell after 3.5 ‒ 4.0 hours of infection. After this time, HeLa cells detach and break up. The high rate of growth in the HeLa cells mirrors S. flexneri’s in vivo dynamics, making this a handy model system for studying intracellular growth and survival.

Offhand, one would expect that infected cells develop large metabolic changes but, surprisingly, the energy charge — relative ATP, ADP and AMP levels, a measure of how a cell is doing, energy wise — did not change significantly during infection. This implies that the infected cells somehow manage to produce energy at their usual level despite carrying a load of bacteria. Do the infected cells increase their uptake of nutrients from the extracellular environment? Not so: infected cells consumed glucose and took up glutamine at about the same rate as uninfected cells, despite the bacterial load. If nutrient capture by Shigella does not come at the expense of the host's energy supply nor from the extracellular environment, where does it come from?

The investigators determined the metabolic pathways involved in host cell ATP production by feeding them uniformly labeled 13C-glucose and measuring its incorporation into various metabolites using mass spectroscopy. Again, it was surprising that the proteome of infected and noninfected cells looked alike, suggesting that HeLa cells do not greatly reorganize their metabolic machinery as the result of this infection. In fact, both infected and uninfected HeLa cells metabolized glucose through the Embden-Meyerhof and pentose phosphate pathways, with very little feeding into tricarboxylic acid (TCA) cycle intermediates. These results confirmed what earlier studies had found: in HeLa and other cancer cell lines, most ATP production occurs via fermentation, the so-called "Warburg effect." The authors note that cells of the colon, however, normally produce ATP by butyrate oxidation rather than fermentation. Thus, more work is required to determine the relevance of these findings for in vivo infections.

The question now narrows to why acetate is made in such large amounts upon infection. Acetate is the main metabolic waste product of rapidly growing Shigella in culture. It is made in two steps:  acetyl-CoA → acetylphosphate via phosphotransacetylase (Pta), and acetylphosphate and ADP → acetate and ATP via acetate kinase (Acka). Shigella pta and ackA mutants were found to have slower growth rates and greatly reduced loads in infected HeLa cells. Also, HeLa cells infected with either of these mutants excreted lactate and pyruvate, but very little acetate. These results suggest that most of the acetate excreted by HeLa cells infected with the wild type Shigella was due to the conversion of pyruvate to acetate by the bacteria.

How to prove this? A Shigella mutant deficient in pyruvate dehydrogenase and thus unable to convert pyruvate to acetyl-CoA grows poorly and does not make acetate, suggesting that pyruvate is an important source of acetate in Shigella. Confirmation of this, however, would require a mutant defective in pyruvate uptake, but such a strain is currently not available. So these workers instead added 13C-pyruvate, which was efficiently converted to 13C-acetate even with excess unlabeled glucose, suggesting that pyruvate was preferentially used over glucose and glycolytic pathway intermediates. Keep in mind that metabolizing one pyruvate molecule yields just one ATP, compared to the TCA cycle, which yields up to 14 ATP. But, as the authors state, "...the low-yield acetate pathway has lower enzyme costs and membrane space requirements and can operate at much faster rates compared with low-throughput, high-yield TCA cycle/oxidative phosphorylation, which requires bulky enzymatic machinery in the bacterial inner membrane." They also point out that the importance of this pathway may have previously escaped detection because the more usual experiments dealt with the incorporation of precursors into macromolecules.

Particularly interesting is that while carrying a large pathogen burden, the host cells maintain normal energy fluxes that extend their life, thus favoring an extensive production of pathogen biomass. This study clearly shows that the most important metabolite seized by Shigella for proliferation is likely to be pyruvate. Through the phosphotransacetylase-acetate kinase (Pta-Acka) pathway, pyruvate is converted to acetyl-CoA, acetyl-phosphate, and finally to acetate. But some good news (for humans) might emerge from this bleak scenario. A different kind of metabolism than that of the host suggests that Shigella must be sensitive to metabolic perturbations, as confirmed by the weakened behavior of mutants. And since human cells do not contain homologs of Pta and Acka, specific inhibitors of these Shigella enzymes could prove effective as anti-Shigella agents. See there — dusting off the central metabolism lectures from your biochemistry course may prove useful after all!