« Of Terms in Biology: Metagenomic Binning | Main | Welcome to Autumn »

Watching an Endosymbiont Becoming an Organelle? 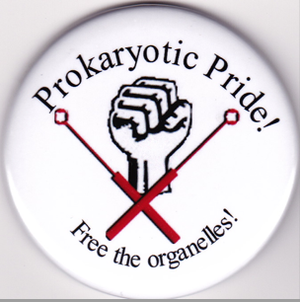 Ah, endosymbiosis and the origin of eukaryotic cells… Wasn't this one of the grandest of all the grand events in Biology? In its ability to boggle the mind, it comes in second only to the origin of life. This, one of the most decisive events in evolution, had a unique character. Instead of new traits being acquired gradually, a whole bunch of them were transferred at once to a willing recipient. A single step is all it took. But since it happened in farthest antiquity, many of the details are hidden from us. One of the main reasons for our ignorance is that we known practically nothing about the intermediate stages in the process. For views regarding such questions, see here and here. What is known is that part of the symbionts' genomes got transferred to the nucleus of the host cell. The nucleus becomes the home for genes needed for the proper preservation and the function of both types of major organelles, mitochondria and plastids. Why this transfer of endosymbiotic genes? Why didn't the genes stay put within the organelle? In other words, why this circle dance?

Many reasons have been suggested. The list includes the need for providing a shelter from the free-radical, ergo perilous, environment of the mitochondria. Also plausible is the need for regulation à la eukaryote, making the expression of organelle genes subordinate to that of the cell. And then, how about Muller's ratchet, the effect of the accumulation of mutations that cannot be repaired in the absence of sex and recombination? Clearly, these sporty activities are provided in the nucleus but are missing in the organelles. And to add to the list of possible reasons, the insertion of a large number of exogenous bits of DNA into the nucleus must have major evolutionary consequences on the host. 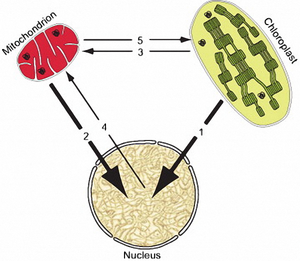 Whatever the reasons, most of the genes transferred to the nucleus are inactive and sooner or later will be eliminated. But a few remain functional and serve to make organellar (is there such a word?) proteins. Now, how do such essential proteins that are encoded in the nucleus return to the organelles? Obviously, there has to be a reasonably specific transport mechanism. Indeed, some of these proteins carry suggestive signal sequences that probably play a role in their return to their ancestral home.

With all this to-and-from on the organellar front, why shouldn't some proteins encoded by nuclear genes be transferred to present day endosymbionts as well? If so, would this further blur the line between organelles and endosymbionts? So far, such transfer has only been shown for an ameba called Paulinella, which carries within it a cyanobacterium on its way to becoming a genuine chloroplast. But another example of such transfer to an endosymbionts has recently been uncoveredby Nakabachi and collaborators in the relatively well-studied pea aphid and its symbiotic bacterium, Buchnera aphidicola. This bacterium is an obligate symbiont because it provides the host with needed amino acids and, having a highly reduced genome (~650 kb), is itself dependent on the host for sustenance, mainly for a nitrogen source.

The aphid is known to have acquired twelve gene fragments from some bacteria via horizontal gene transfer. Seven of these sequences are actively transcribed in the place where the bacterium resides, the specialized insect cells called bacteriocytes. Interestingly, none of these transcribed genes are from Buchnera, but rather are from other bacterial groups, possibly Alphaproteobacteria (Buchnera is a Gammaproteobacterium). The Buchnera lacks these seven sequences, thus their products may well be essential for the bacterium. The transcriptional pattern of these genes tells us that they had picked up eukaryotic promoters and regulatory elements, thus are now under the control of the nucleus. 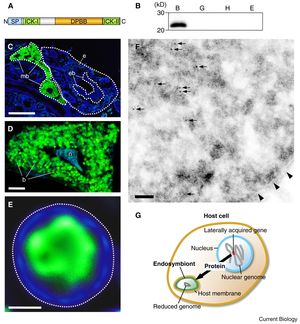 One of these genes, rlpA, was studied in detail. It encodes a "rare lipoprotein" that in Pseudomonas at least is involved in maintaining cell shape and separating daughter cells. As determined by the location of gold-labeled specific antibodies, this protein is made exclusively in the bacteriocyte. It must be important for the Buchnera because it's found in all the mature bacteriocytes, not just a few. No localization was observed anyplace else, including in immature bacteriocytes (even thought they carry Buchnera within) and embryos.  This unexpected finding may give a hint as to the function of this protein: being found just in the mature maternal bacteriocytes suggests that it could play a special role in the vertical transmission of the endosymbionts to the embryos. Most interesting is that RlpA protein was only detected within the Buchnera (mainly in its cytoplasm) but not in the nucleus or cytoplasm of the bacteriocyte. How does it get to the symbiont? The transport system that delivers RlpA to the symbiont is not yet known, although the protein has a canonical eukaryotic signal peptide at the N-terminus, suggesting that it does its trafficking via a secretory pathway.

So, this is a bona fide case of transfer of a protein from the nucleus to an endosymbiont. As we saw above, this is common in organelles, but finding that it can take placein an endosymbiont is news. Are we witnessing an endosymbiont early on its way to becoming an organelle? Does this finding reflect ancient events of eukaryogenesis? If so, it might encourage us to think that the distinction between the two is fuzzy and perhaps only of temporal significance. In the words of McCutcheon and Keeling in a commentary: Organelles were discovered first, have been studied for decades, and their bacterial origins dominated the discussion about endosymbiosis and evolution for many years. They enjoy a status apart from other biological entities: derived from bacteria, but so different as to be given their own name. But the list of their 'unique' characteristics is shrinking: stable endosymbioses promote extensive genome reduction in the symbiont, HGT (horizontal gene transfer) from various sources to the host genome to maintain symbiont function, and now the targeting of protein products from host to symbiont has even been found. These make clean separation of endosymbiont from organelle more difficult to see, prompting us not to look for the point when a symbiont 'becomes' an organelle, but rather to ask, 'Is there really anything so special about organelles?'