by Anne A. Madden

This article was first published in 2013 on the website for the Society of Integrative and Comparative Biology.

Many plants do not want to be eaten. They avoid this fate by producing deadly toxins and carcinogenic poisons, such as those associated with the aptly named poison ivy, poison sumac, and deadly nightshade. Despite such defenses, almost half of all animal species make a living eating plants. Most use their liver to detoxify these plant poisons, but it appears that at least one animal species outsources some of this work to other organisms. Specifically, a few billion others.

Gut bacteria are known to aid animals with proper immune system functioning, fiber digestion, and vitamin acquisition, but as postdoctoral researcher Kevin Kohl states, "for decades it's been hypothesized that the gut bacteria play an important role in breaking down toxic chemicals as well." He and Drs. Denise Dearing, Colin Dale, James Cox, and Robert Weiss of the University of Utah wanted to address whether gut bacteria detoxify plant poisons. Armed with new genetic sequencing technology that allows them to decipher what is happening microscopically in an animal gut, they looked for answers in the unlikely location of a desert woodrat.

Figure 1. A desert woodrat and the main component of its diet, creosote bush. (Credit: Kevin Kohl)

Desert woodrats, Neotoma lepida, of southern Utah, feed on a diet of creosote, Larrea tridentata. This plant is packed with bitter chemicals whose tastes hint at their toxic nature. Ingestion of these poisons can lead to kidney cysts and cancer. Despite such dire consequences, woodrats ingest enough of these plant toxins to kill a lab rat. Every day. But the desert is not littered with woodrat corpses, so clearly they are able to detoxify this poisonous salad somehow. Clues in the woodrat's anatomy suggested that more was going on than just a hyperactive liver.

Woodrats have a uniquely segmented stomach. An upper pouch — the foregut — is the first stomach where food lands after being swallowed. Unlike our own highly acidic stomach, this foregut is packed with billions of bacteria, remind us of the rumen of cows and sheep. This unique feature hinted that these bacteria might be playing a role in ingestion. To test whether these bacteria were assisting with detoxification, Kohl and his associates investigated all the bacterial genes in the stomach, by sequencing the bacterial DNA. This allowed them to characterize what bacteria were in the stomach, and what metabolic pathways they may be assisting with.

They found that when woodrats are fed the major toxin of creosote, their stomachs are full of bacteria with genes associated with creosote detoxification. It appeared the bacterial community was responding to the chemicals by increasing the abundance of genes for enzymes involved in the degradation of these specific chemicals.

However, if you are a woodrat, you probably care less about how much bacterial machinery you have and more about whether they are helping you cope with poisons. The researchers explored this aspect by using antibiotics to reduce the number of bacteria in the foregut and thereby remove the bacterial detoxifying machinery. Without their bacteria, the woodrats couldn't consume as much of the poisonous food. After a few days of ingesting such toxins, they stopped eating all together. For a woodrat, starving is apparently better than being poisoned to death. But removing a trait is one thing. Could the researchers feed an animal a bacterial supplement and confer a novel ability to ingest high levels of poison?

The researchers went back out to the desert to collect more woodrats. This time they collected them from northern Utah, where creosote does not grow. These animals have no ecological or evolutionary history with this plant, and have a very low threshold for their toxins. They can tolerate only 50% of the toxins that their southern cousins ingest. Kohl then performed a switch, transplanting the microbial community from the southern woodrats who eat creosote, into the northern group that can not. Then he fed the toxins to this transplanted group and waited.

Typically when the woodrats can't detoxify creosote poisons, their urine becomes red, an indicator that the normally red toxins are passing unprocessed through the organism and thus retain their toxicity. Kohl describes looking at the experimental woodrats' urine and seeing that it was not the toxic red, but beige — suggesting that indeed the woodrats had gained the ability to detoxify more plant toxins. "I ran up to my advisor, because we didn't think this transplant experiment was going to work at all. And it was literally on the first day when I gave them this toxic diet I could see this obvious difference in their urine. So I ran into her office and shouted 'I think this is working!' " At first cautiously optimistic, his advisor joined in his enthusiasm when follow-up tests revealed that indeed, the experimental treatment had worked.

Startlingly, the rats could eat more poison. By giving a bacterial supplement to the northern woodrats, he had given them the ability to eat a whole new group of plants. This is akin to a human eating a yogurt and suddenly having the ability to live off of lawn clippings. 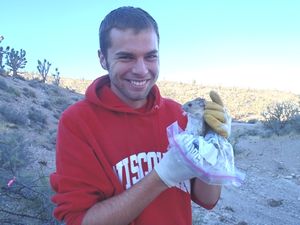 Figure 2. Dr. Kohl and one of his woodrat subjects. (Credit: Kevin Kohl)

Kohl is quick to state that the bacterial transplant cannot completely replace a liver. Even with a bacterial transplant, the northern woodrats were never able to eat quite as much toxin as their southern cousins. It appears that in these animals, the liver and bacteria both assist with total poison detoxification. By using the microbes as a secondary liver, however, the rats not only survive poisoning, but also save energy on detoxification.

There are more than just energy-saving benefits to relying on other organisms to serve as your extra liver. There is also the ability to gain a new trait over your lifetime. As Kohl describes, "With my transplant experiment, it was basically within one generation that I could change how much toxin they could eat. So it's different than a selection experiment where I would have to wait over twenty generations of selection on a liver enzyme before the rats could eat more toxin. It's a lot more rapid." Basically, evolution takes time, but eating a bunch of bacteria does not.

The ramifications of these findings stretch beyond the biology of a woodrat. Future extensions of this research could lead to bacterial supplements that allow domesticated farm animals to eat the extremely common creosote plants that stretch across the American deserts — a highly available food source currently protected by its toxins.

For now, the findings beg the question: are you really limited by what you can eat, or by what the bacteria in your gut can eat? For a poison-munching rat in the desert, the answers are one and the same.

Anne A. Madden is at the Cooperative Institute for Research in Environmental Sciences, University of Colorado, Boulder and the Department of Biological Sciences, North Carolina State University. She received her Ph. D in biology from Tufts University where her dissertation focused on the microbial communities of paper wasps. When not sharing the research of other scientists, she conducts her own investigations on the arthropod contribution to the microbial communities of our homes.