« TWiM #88: A Century of Excellence in Microbiology | Main | Watch "Microbes After Hours - The Water Supply" live from ASM HQ tonight at 6 PM ET »

As an exception to our usual format, this post comes in two parts. Part 1 introduces the dancers and gives an outline of the choreography, next week's Part 2 will lift the curtain and take a glimpse at the ballet compa­ny's performance.

(Re-)Introducing the Pseudomonads. Despite the somewhat murky provenance of their name, pseudomonads are everything but "pseudo-" in terms of their metabolic versatility: they are bac­terial omnivores, heterotrophs yet far from picky. Members of the family Pseudomonadaceae (Gammaproteobacteria) are ubiquitous and make up a respectable percentage of the microbes in any sample taken from whatever source, be it air, water, soil, plant or animal skin, plastic or metal surfaces. No wonder they are also considered quite frequently in this blog. As skilled chemical en­gineers, they can convert PET bottles to biodiesel and promote ice nucleation at above-zero tem­pe­ratures on plant leaves. They grow aerobically and anaerobically, many are halotolerant, and there are psychrophilic as well as thermophilic family members – in short, one would like to call them holophilic if that term were not already taken by psychology. They speak 'quorum sensing' with each other and proliferate happily as planktonic cells but are also champions of a life in bio­films. The latter makes the therapy of persistent lung infections by Pseudomonas aeruginosa in patients with cystic fibrosis so demanding. And the maintenance of sewage pipes, to give a more mundane example. Luckily for microbiologists, most of them are cultivatable.

Pseudomonas genomes. Pseudomonads have by far the largest genomes among the known Gammaproteobacte­ria and – unlike many Alphaproteobacteria with equally large genomes – they store most of their gene equip­ment in just one single, large, circular chromosome, which in P. aeruginosa PAO1 is 6.3 Mb in size and codes for ~5,600 genes. A recent review summarizes what is presently known about how P. aeruginosa organizes its chromoso­me in the nucleoid to fit into the tiny – compared to the length of the DNA molecule – cell (see Fig. 1) and how it re-organizes it during replication.

Regulation of chromosome replication. P. aeruginosa is one of the exceptional cases of bacteria with two functional replication origins, oriCs, for a single replicon. Both are DnaA-dependent, yet only one, oriC1 located in the rpmH·dnaA intergenic region, can drive chromosome replication alone. Both origins are structurally very similar but it is presently not known whether oriC2 located upstream of gidA at a distance of ~6 kb from oriC1 is used at all or only under unknown growth conditions. In any case, firing of both origins alternately or even simultaneously would hardly un­balance the origin-terminus axis and thus cause problems with cell cycle regulation: the distance of ~6 kb between the two oriCs seems negligible as compared to the overall origin-terminus dis­tance of ~3 Mb. We may have here the rare chance to witness a long-term evolutionary experi­ment: whereas all members of the Pseudomonas family show this 'dual-oriC pattern', more dis­tant­ly related 'cousins' have apparently chosen to retain only one of them, either next to gidA as in Cellvibrio japonicus (Pseudomonadales) and Kangiella koreensis (Oceanospirillales), or upstream of dnaA as in Hahella chejuensis (Oceanospirillales) (my in silico findings).

We know little about the regulation of initiation of chromosome replication in P. aeruginosa. In E. coli, DiaA promotes higher-order complex formation of the initiator protein DnaA bound to oriC prior to initiation, while Hda – in concert with the β-clamp subunit of the replicative DNA polyme­ra­se – inactivates DnaA shortly after initiation by stimulating DnaA's intrinsic ATPase activity. Genes encoding homologs of E. coli DiaA and Hda are present in the P. aeruginosa genome but neither protein has been looked at experimentally. By contrast to E. coli, a functional equivalent of the Dam/SeqA system that limits initiation to a narrow time window has not been found, nor is it known if its dnaA gene is subject to autoregulation. Likewise, the termination step of chromosome replication is only rudimentarily understood in P. aeruginosa. From the presence of E. coli homo­logs for XerCD and FtsK, we may conclude that in P. aeruginosa as well FtsK translocates DNA across the septum after XerCD recombinase disentangles the fully replicated chromosomes at the dif site during the final stage of chromosome segregation (see also here for FtsK's function). Clear­ly, understanding the regulation of replication in P. aeruginosa demands further studies. 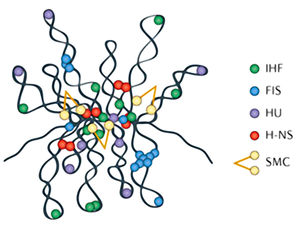 Chromosome compaction. P. aeruginosa, as most other bacteria, compacts its chromosome is compacted by ne­gative supercoiling of the DNA through the combined actions of topoisomerases and so-called nucleoid asso­ciated proteins (NAPs), including IHF, Fis, HU, and MvaT/ MvaU (putative E. coli H-NS homologs). Unlike classical repressors, NAPs don't usually bind to well-defined bin­ding sites in promoter regions of genes but bind to more relaxed recognition sequences and particular DNA struc­tures. When bound to DNA, NAPs induce bends and kinks and, by oligomerization, lead to 'bridging' of separate neighboring topological domains (Fig. 2). Such domains are approximately 10 kb in length and highly dynamic, meaning that they form and dissolve in response to on­going transcription and replication without having fixed positions.

In both eukaryotes and prokaryotes, chromosome compaction involves a set of SMC proteins, for 'Chromosome Maintenance of Chromosomes'. In a giggly mood, one would probably compare the SMCs to chopsticks for picking up noodles from a bowl of Japanese Udon noodle soup. The first bacterial SMC, MukB of E. coli, was detected in 1991 by Sota Hiraga and its shape as a dimer isn't so far from that of a pair of chopsticks (Fig. 3, A). The SMCs’ job is indeed to pick noodles: they 'clamp' together the 10 kb topological domains (Fig. 2) and can be, together with their accessory pro­teins, called condensins. 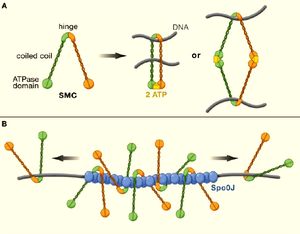 Figure 3. A B. subtilis SMC forms V-shaped di­mers, whose two arms are connected by a fle­xible hinge. After association of the hinge re­gion with DNA, the two head domains can in­teract in an ATP-dependent manner, forming a ring­like structure that embraces seg­ments of double-stranded DNA. Engage­ment of the head domains from different mole­cules results in the formation of larger rings or more complex struc­tures, such as rosettes and filaments. B Mo­del for the recruitment of SMC to the repli­cation origin region in B. subtilis. Spo0J (ParB) in­teracts with proximal parS sites and spreads into the flanking chromosomal regions, giving rise to large nucleoprotein filaments. SMC is specifically recruited to these complexes and then becomes distributed over the replication origin region by lateral diffusion. Source

Chromosome partitioning. In addition to their function in chromosome compaction, bacterial SMCs participate in chromosome segregation during replication in ways that are not yet fully understood. Unlike most other bac­teria, which rely on one set of SMC proteins ­– the B. sub­tilis SMC-type or the E. coli MukBEF-type – P. aeruginosa PAO1 encodes two condensins, the B. subtilis-type SMC-ScpAB and the E. coli-type MksBEF. Both contribute to faithful chromosome partitioning and their inactivation leads to formation of anucleate cells. However, MksBEF can complement anucleate cell formation in SMC-defi­cient cells.

Many but not all bacteria posses a ParABS system that organizes and compacts the chromosome at a higher dimension – above the level of the 10 kb topological do­mains – and actively controls the movement of chromo­some segments during replication. Present models sug­gest that ATP-bound ParA oligomerizes to filaments along the cell axis and loosely contacts the DNA. ParB dimers bind strongly to palindromic parS sites at the re­plication origin region. ParS-bound ParB stimulates the intrinsic ATPase activity of ParA upon contact with a fi­lament tip, causing ParA to de-polymerize. By alternating polymerization-depolymerization steps of ParA, chromo­somal DNA tethered to ParB·parS is pulled towards and along the ParA filament, thus spatially separating the replicating sister chromosomes. All compo­nents of a functional ParABS sytem are encoded in the P. aeruginosa genome, and parA or parB mutants show severe growth defects, including aberrant chromosome segregation and misloca­tion of oriC and ter. Interestingly, four parS sites were found close to oriC and another four (of 10 altogether) in an origin domain detected by Vallet-Gely and Boccard (more details to this in Part 2). So far only observed for B. subtilis and Streptomyces coelicolor, Spo0J/ParB can polymerize around its parS binding sites forming large nucleoprotein complexes that then attract SMCs (Fig. 3, B). The exact nature of the 'communication' between the P. aeruginosa SMCs and its ParABS system has yet to be deciphered.

The above may sound like an extended to-do list rather than a well established choreography, but Part 2 will show that it was nevertheless possible to gain deeper insight into the ballet of chromo­some organization in Pseudomonas aeruginosa cells.