As an exception to our usual format, this post comes in two parts. Last week's Part 1 introduced the dancers and gave an outline of the choreography, Part 2 now lifts the curtain and takes a glimpse at the ballet compa­ny's performance. 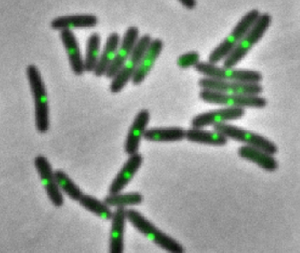 Studying chromosome organization in bacteria. Over the last twenty years, molecular biologists developed and refined a downright cute method to study bacterial chro­mosome organization in live cells. Briefly, a cluster of binding sites for a DNA-binding protein is introduced at a chosen locus of a bacterial chromo­some via genetic en­gineering (=cloning). If this 'tagging' is repeated for a fair number of loci, a set of strains is obtained that 'covers' the entire bacterial genome from replication origin to terminus on both chromosome arms – termed left and right replichores. Into each of these strains, a plasmid is introduced with the gene encoding the respective DNA-binding protein fused to a gene encoding a fluorescent protein under controlled expression. Cultures of the va­rious strains are grown under identical conditions, the expression of the gene fusion induced, and samples taken over the entire cell cycle. In a successful experiment, the fluorescent DNA-binding protein binds to saturation to the cluster of its cognate binding-sites at the defined locus, thus creating a bright focus when the cell is observed by fluor­escence microscopy (FROS microscopy). The images are evaluated by software that measures the cell dimensions as 'seen' in phase-contrast images and 'determines' the location of the fluorescent spot within the cell. Thus, sampling of hundreds of cells for each time point allows one to accura­tely trace the position of a particular chromosomal locus within the nucleoid over the entire cell cycle. It goes without saying that rod-shaped cells that grow by elongation are best suited for this type of analysis. 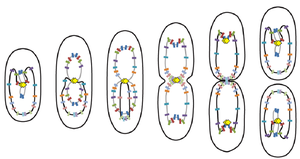 Chromosome organization in P. aeruginosa. In new­born cells, the replication origin oriC is located at mid-cell and the terminus region close to the newer cell pole (Fig. 2, left). The nucleoid occupies ~4/5 of the cell vol­ume, leaving a void close to the older pole. For the greater part of the cell cycle, the replication forks stick together as replisomes in the mid-cell positions in ~90% of the cells while they appear as separate yet closely spaced spots in the few remaining ones (Fig. 1). Rather than migrating along the chromosomes as in E. coli, the replisomes of P. aeruginosa are apparently organized as a stationary 'replication factory', and the chromosome is threaded through this factory, as was proposed for B. subtilis. Newly replicated chromosome segments are se­gregated to opposing compartments according to their position on the genetic map. The markers close to the origin segregate in concert – thus defining an 'origin domain'. This way, the two new oriCs occupy positions that correspond to 1/4 and 3/4 of the cell length, respectively. Markers close to the ter­minus also segregate in a concerted manner, allowing Vallet-Gely and Boccard to define a 'termi­nus domain'. Markers between these two domains segregate successively without any signs of concerted movements.

It has become sort-of fashionable in recent years to relate the bacterial cell cycle more directly to the eukaryotic cell cycle with the aim of developing a unified scheme (and, yes, to impress eukar­yo-centric biologists). Indeed, in very slowly growing bacteria – likely the normal situation for most bacteria in the wild due to the nutrient limitations pervasive in most habitats – chromosome repli­cation (S-phase) is completed well before cell division (M-phase), and the initiation step in bacterial chromosome replication clearly suggest a parallel to the G1-checkpoint in eukaryotes. In line with this thinking, the ParABS system for chromosome segregation (see Part 1) has occasionally been referred to as the "bacterial spindle apparatus." There's a caveat however: as was clearly shown for Pseudomonas aeruginosa – and earlier for Escherichia coli, Bacillus subtilis, and Caulobacter crescentus – segregation of newly replicated segments of the chromosome occurs concomitantly with replication, in both fast and slowly growing cells. There is no defined "M-phase" in the bacte­rial cell cycle, and for good reason: bacteria can – and do! – adapt seamlessly to faster or slower growth rates by "uncoupling" their replication cycle from the cell division cycle. Even in slowly growing P. aeruginosa cells, replication of the grandchildren's chromosomes already begins in the daughter cells shortly before division of the mother cell (Fig. 2, right).

Chromosome Segregation. There is only one, rather trivial common theme in the chromosome organization of the few bacteria studied so far: the terminus region is replicated, disentangled, and segregated last, close to the septum at mid-cell, and just prior to septum closing and cell di­vision. As if to emphasize the importance of this step, Vibrio cholerae, which has two chromoso­mes, initiates the replication of the smaller chromosome 2 with a delay, so that termination occurs for both at the same time. There are no 'consensus' positions of origin (oriC) and terminus (ter) within cells of different organisms at the onset of replication. Two patterns of chromosome segre­gation have emerged so far (for details see here and here):

It appears that a mixture of both organization patterns takes place in P. aeruginosa: with oriC at mid-cell and ter at the newer pole, resulting in an overall longitudinal orientation of the repli­cho­res. We can speculate that differences in chromosome organization among these organisms re­flect their different complements of SMC proteins, which in turn differ in their interactions with available ParABS-systems or their equivalents.

A final aside. You find in molecular genetics textbooks statements such as: "circular bacterial chromosomes are organized such that the replication origin is located opposite to the terminus region where, during the final stage of replication, the two chromosomes are disentangled prior to cell division." This has been shown for E. coli and B. subtilis. And similarly, the replication origins are centrally located on the linear chromosomes of borrelias and streptomycetes. However, for the vast majority of the now ~3,000 fully sequenced bacterial genomes this has only been deduc­ed from metric analyses of skewed base compositions of the two DNA strands – for example the GC-skew – and skewed distributions of short oligonucleotide sequences. It is still debated why guanosine nucleotides are preferentially found on the leading strand in most genomes but it is undisputed that, for a given genome sequence, inflection points in a graph for the cumulative GC-skew (CGC-skew) indicate the approximate positions of the origin for bidirectional replication and of the terminus. 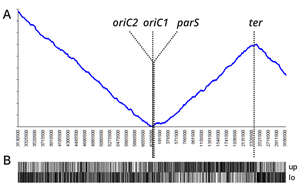 Figure 3. A CGC-skew for the P. aeruginosa PAO1 genome [GenBank: AE004091.2]; the positions of the replication origins (oriC1, oriC2), the oriC-proximal ParB-binding sites (parS), and the terminus (ter) are indicated. Source data. B Barcode-type pattern depicting the presence of E. coli-type KOPS (5'-GNGNAGGG) in 1 kb segments of the P. aeruginosa PAO1 genome, co-linear with the genome sequence in A; up upper strand 2781 sites, lo lower strand 3464 sites. Software

I could not resist performing such an GC-skew analysis for the published P. aeruginosa PAO1 genome (Fig. 3, A). Both inflection points are clearly detectable but, surpri­singly, replication origin and terminus are distinctly not opposite to each other: the 'right arm' of the chromoso­me is shorter than expected by ~1/4. Assuming that the replicative DNA polymerase of P. aeruginosa is twice as processive as its E. coli counterpart, the 'shorter arm' would be fully replicated a stunning 10 minutes earlier than the 'longer arm'. This factoid is supported by the finding that the distribution of the recognition sequences (KOPS) for the DNA translocase FtsK (see Part 1) also shows this weird 'aberration' from textbook wisdom: the inflection points of the KOPS skew correspond to those of the CGC-skew (Fig. 3, B). So then, what's wrong with P. aeruginosa PAO1? Not so much actually. Strain PAO1 was first isolated in 1954 and later chosen as reference strain. It has since been subcultured in various labs around the world and by the 1970s researchers had already observed genotypic and phenotypic variations among sublines. No wonder, this is simply ongoing evolution in a living organism – microevolution, if you wish. Point mutations accumulate over time as do indels and inversions of smaller and/or larger portions of the genome. Maybe be­cause they do not mess up base and oligonucleotide skews, large inversions are preferentially found for segments that include either the replication origin or the terminus region. The latter had apparently happened in the P. aeruginosa PAO1-UW isolate that was chosen for genome sequenc­ing: a large asymmetric genomic inversion of ~2.2 Mb between two rRNA operons led to an 'imbal­ance' of the origin-terminus axis while the original isolate has a near-to-perfect origin-terminus axis (as has the PAO1 isolate used for studying chromosome organization, see Fig. 2). We may wonder whether such imbalances in genome organization are stable outside the lab. In summary, there is no need to rewrite the textbooks. Such examples illustrate neatly, though, that 'rules' are – more often than not – observed rather slovenly in real life.