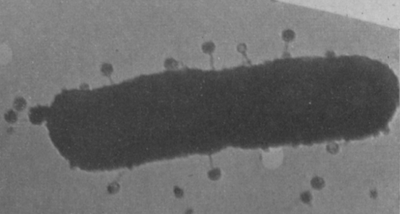 In the early 1950’s it wasn’t clear yet if phages attach to bacteria via their head (sperm-like) or by their tail. Sounds simple but images showing both modes had been produced. In 1953, T. F. Anderson, one of the pioneers in the use of the electron microscope in microbiology, thought that the head-first arrangement could have been due to an artifact, as shown in his diagram. In a Cold Spring Harbor Symposium paper he said "Some pictures of air-dried specimens showed particles adhering to cells by their tails (Ruska, 1943; Anderson, 1948), but others showed that the majority of particles many microns away were oriented with their heads pointing toward the cell (Anderson, 1949). We now think this "action at a distance" arose while the specimen was being dried for electron microscopy: that the liquid meniscus, stretched over the cell in the last stages of drying, had tipped the heads of the particles toward the cell as their tails adhered to the collodion membrane used to support the specimen. When such specimens are dried by the critical point method which eliminates the meniscus, these distant particles can be seen still standing up on the membrane while adsorbed particles of the T-even phages, as well as the unrelated phages T1 and T5, are to be seen adhering to the host cells by their tails. We conclude that these phages are adsorbed to host cells by the tips of their tails."

Schematic diagram showing how the meniscus around a bacterium tends to tip phage particles towards a cell in air-drying a specimen for the electron microscope.

Using the right technique is all it took!

I thank Fred Eiserling for pointing out this paper.