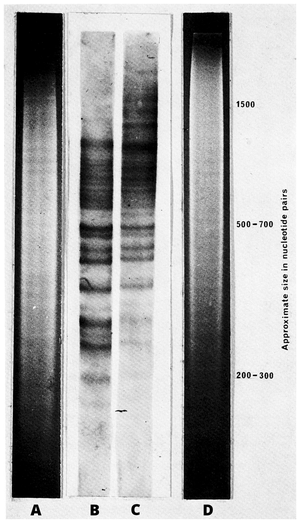 Restriction enzyme Hae III digest of E. coli MRE­600 DNA separated by electrophoresis on 2% aga­rose gel. DNA was then transferred to cel­lulose nitrate and hybridized with 32P-labelled RNA. A and D Ethidium bromide fluorescence of the total DNA in the samples after gel elec­trophoresis, on the right is a scale of the mo­lecular weights. B and C Radioautographs of hy­brids on the blot. Source

"... These results, gained with a novel method for blotting (E. M. Southern, manuscript in preparation), have also led to the identification of the Bam Hl recognition sequence". It is rather unusual to find unpublished work referred to in the abstract of a paper, to put it mildly. But this was exactly what readers of the October issue of the journal Cell found, back in 1975. The cited paper was finally published in November of that year and the stunningly simple technique described therein spread like wildfire across all molecular biology labs, worldwide. You've never heard of "Southern blotting"? Not likely. But here you are, in the author's own words: "This paper describes a method of transferring fragments of DNA from agarose gels to cellulose nitrate filters. The fragments can then be hybridized to radioactive RNA and hybrids detected by radioautography or fluorography." (see Fig.)

Back then in the 1970s, DNA·DNA heteroduplexes formed by hybridizing phage DNAs carrying genetically defined mutations — preferably deletions or insertions — could be analyzed in great detail by electron microscopy (see Pictures Considered #6). Analyzing larger genomes for repetitive and singular sequences by measuring melting curves for bulk DNA was state-of-the-art. Also, hybridization experiments were carried out to determine the relatedness of genomes, mostly by hybridizing radioactively labeled rRNA probes to bulk DNA and separating single-stranded probe molecules from double-stranded heteroduplexes by filtration prior to counting radioactivity on the filter. Neither sensitivity nor the specificity of this approach were mind-blowing. Last, mapping gene sequences by DNA digestion with restriction enzymes had just became possible in 1971 but was only applicable for small genomes as of plasmids and viruses.

It did not take long for Ed Southern's brilliant idea — separating large macromolecules by size via gel electrophoresis and subsequently transfering the separated molecules to a solid support (solid phase) by capillary forces (=blotting!) prior to probing their hybridization to purified labeled molecules (liquid phase) — was extended to the analysis of other molecular interactions. Since researchers in those days felt they should give credit to the original inventor but also liked to have fun in the lab, we have now in addition to "Southern blots" such varieties as "Northern blots" (labeled DNA probing separated mRNAs), "Western blots" (labeled protein or antibodies probing separated proteins). Other variants as e.g. "Eastern blots", "Southwestern blots", "Northwestern blots", or even "Far-Eastern blots" never became as popular. However, "Colony blotting" — a shortcut of the original "Southern blotting" technique that allowed to skip the gel electrophoresis step — was highly popular in the 1980s when large scale sequencing became feasible and genomic libraries were prepared routinely (remember that Sanger sequencing was introduced in 1977). All these lab techniques achieved previously inconceivable specificities and sensitivities, and were outmatched only much later by present day's microchip technologies.