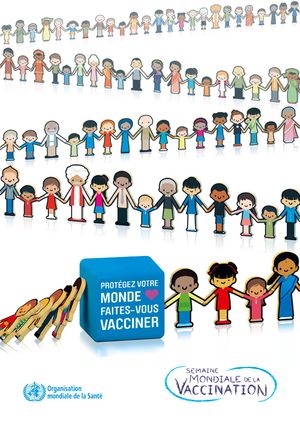 Figure 1. Following in the footsteps of the bacteria, we bolster our adaptive immune defenses by vaccination with inactivated viruses. Source

Over the past eight years, step-by-step, researchers have established a basic understanding of the CRISPR defenses against foreign DNA so widely used by both bacteria and archaea. We related the early story on STC in 2008 and commented on six additional questions in 2011. Still, questions remain. Here is an update on two of them. (For the basic nuts and bolts of CRISPR-Cas systems, please visit those two earlier posts.)

Question #1: How do you survive lytic phage invasion long enough to acquire a spacer?

A CRISPR-Cas defense (CRISPR for short) can quite efficiently dispatch a phage invader, but doing so requires having crRNAs on patrol that target that phage. To have such armed guards on duty, not only must you have a spacer in your CRISPR library acquired from that phage, but you must have transcribed the library and processed the transcript into active crRNAs. This takes time. A lytic phage can cause irreversible damage more quickly. So how does a bacterium or an archaeon acquire a new spacer in time and live?

Two purported sources of spacer sequences are 'dead' phages, both those dead on arrival and those dispatched by the host. In many natural ecosystems, phage virions have a half-life on the order of a few days due to damage from UV irradiation, enzymatic attack, and other agents. In the upper 200 m of clear oceanic waters, for example, "a large proportion" of virions may not be infectious. Many of these, however, may still be capable of delivering at least part of their genomic DNA into the cell, thus providing the bacterium with a sampling of innocuous DNA from local phages. As early as 2010, researchers had postulated that cells could acquire spacers from such DNA fragments and thereby prepare to defend themselves should they encounter the same phage again. In addition, bacteria and archaea that carry a restriction-modification (R-M) system can create harmless fragments from the genomes of invading phages. If the incoming phage DNA contains unmethylated restriction recognition sites, the cell's restriction endonuclease will cleave the DNA at those sites, thus inactivating the phage and providing material for potential spacer acquisition.

Another group of researchers has now put these ideas to the test using Streptococcus thermophilus SMQ-1279. This strain carries two active type II-A CRISPR systems (CR1 and CR3) and a type II R-M system — two defenses that work in concert to provide a more effective anti-phage defense. It is sensitive to infection by lytic phage 2972 but its R-M system reduces successful infection by that phage by five orders of magnitude. Typically restriction is a 'leaky' defense because the cell contains active DNA methylases as well as restriction endonucleases. On rare occasion the phage DNA is methylated before it is cleaved, the phage replicates, and host lysis releases a swarm of fully-methylated progeny that can infect that host strain with impunity. Taking advantage of this feature these researchers were able to prepare stocks of both unmethylated phage 2972 and fully-methylated phage 2972M+ for use in their experiments. 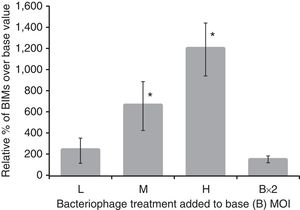 First experiment: Infect this host with phage 2972M+. When attacked by fully methylated phages, the host's R-M system is useless. Moreover this host strain does not have a spacer targeting this phage. Host survival depends on the rapid development of CRISPR immunity by acquisition of a spacer targeting the attacking phage — a rare event that yields few surviving colony-forming units (CFUs). These survivors, referred to as BIMs (Bacteriophage Insensitive 'Mutants'), almost always have a newly acquired spacer. Next step: repeat this experiment but this time challenge the cells with a mixture of both methylated and unmethylated phage. If their hypothesis was correct, restriction endonuclease cleavage of the unmethylated phage genomes would facilitate spacer acquisition and thereby increase the number of new BIMs. Their results support this hypothesis as the number of BIMs increased as much as ten-fold, the greatest increase being observed with the highest MOI (multiplicity of infection) of the unmethylated phages. When these BIMs were tested by PCR for spacer acquisition, at least 97% had new spacers.

Their second experiment mimicked the first, only here the unmethylated phages were replaced by UV-inactivated phages. This protocol increased the number of BIMs three-to-four-fold. They attributed the lesser increase to the likelihood that UV-damage rendered many of the phage virions incapable of DNA delivery into the hosts, thus effectively decreasing the MOI. Together these two experiments strongly support the hypothesis that the presence of non-infectious phage DNA, whether due to damage prior to entry or to cleavage by the host after entry, can provide a route to safe spacer acquisition.

Still one more experiment was needed to provide definitive evidence that the spacers were acquired from the non-infectious DNA. For this they used two different, but related, phages: 2972 and 858. Their genomes are 90.9% identical at the nucleotide level and share some, but not all, potential CRISPR targets. (A potential target is simply a DNA sequence close to the protospacer adjacent motif [PAM] that is recognized by the host's CRISPR-Cas system.) First they challenged hosts with only 2972M+, then isolated the resultant BIMs and sequenced their newly acquired spacers.A third of the newly acquired spacers also matched phage 858 as was expected due to the partial identity of their genome sequences.

Next they pretreated the hosts by incubation with completely UV-inactivated phage 858 for 4 h at an MOI of 5. They then challenged the cells by infection with fully methylated phage 2972M+, as before. Now 87.2% of the new spacers matched phage 858, suggesting that spacers had been acquired from the inactivated phage. In addition, one particular spacer clinched their argument. Here I need to first mention that although some CRISPR-Cas systems require an absolute match between the archived spacer and the invading DNA, many are less demanding. This particular CRISPR-Cas system tolerates one mismatch. This is a good strategy for the bacterium as it means a phage cannot evade with a single point mutation in the protospacer. Returning to their experiment, that particular newly-acquired spacer perfectly matched the 858 genome, but had one mismatch with the 2972M+ genome. Thus this spacer could only have been acquired during the preliminary challenge with the UV-inactivated phage 858.

In other words, bacteria use inactivated viruses as a 'vaccine' to elicit adaptive immunity against specific pathogens. It seems we weren't the first.

Question #2: Must you choose between hosting a prophage and having a CRISPR defense?

Not all phage infection is a bad thing. Temperate phages can launch a lytic infection immediately upon arrival, but they also have the option to quietly integrate into the host chromosome as a prophage, i.e., to lysogenize the host. A prophage can reside peacefully long-term, all the while conferring benefits on the host. Benefits? Typically prophages block infection by related phages. Often they encode and express virulence factors or other metabolic genes that assist their host. However, given damage to host DNA or other stresses, a prophage can excise, replicate, and ultimately lyse the host. The truly canny host would want a CRISPR defense that would allow a prophage to integrate and persist but destroy it when it excises.

The accepted view has been that CRISPRs shoot on sight, temperate and lytic phages alike. However, the known CRISPR-Cas systems are a diverse lot. Based on differences in their Cas genes, they are classified into three types and at least 12 subtypes. Since the Cas proteins function in crRNA processing and targeting, these mechanisms vary from type to type. Type I and II CRISPR-Cas systems had been shown to be incompatible with prophages, but when researchers recently investigated type III, they found a different story.

For this study, researchers assembled a test system composed of parts from a variety of sources. For the bacterial host they employed S. aureus RN4220 armed with a plasmid, pGG3, carrying the type III-A CRISPR-Cas system from S. epidermidis RP62a and a chloramphenicol-resistance gene for plasmid maintenance. For the phage, they used four λ-like temperate phages that had been found as prophages in a S. aureus clinical isolate (Newman), thus were creatively named φNM1 – 4. All four make themselves useful to that host by carrying genes that enhance host pathogenicity. They added another key component: a spacer known as 32T that had been found in a CRISPR locus of another S. aureus strain. Spacer 32T had near perfect identity to a target sequence that was conserved in φNM1, φNM2, and φNM4. They added this spacer to their host’s armament by inserting it into the CRISPR array on the plasmid. Lastly, they inserted an erythromycin-resistance gene in the phage genome so they could later select for cells with a stably-integrated prophage.

S. aureus, equipped with the 32T spacer on the plasmid, is highly immune to φNM1. Lytic infection is reduced by seven orders of magnitude relative to controls that lack that spacer. In contrast, the frequency of lysogenization by φNM1 was the same whether the host carried the spacer or not. A CRISPR spacer that interferes with lytic infection but tolerates lysogenization? This tolerance was unexpected. After all, the target sequence would be present in the phage genome both before and after insertion as a prophage.

What could be going on here? The researchers carried out appropriate tests to show that the spacer still matched the target and that the CRISPR-Cas system had not been inactivated. Somehow this CRISPR defense sensed a difference between a phage genome launching a lytic infection and the same genome when inserted as a prophage, and responded appropriately to both. What is that difference? Most phage genes are silenced in the prophage whereas most are actively transcribed during lytic replication. Thus a hypothesis:  type III-A CRISPR-Cas systems target only transcriptionally active targets. 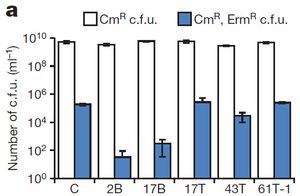 Figure 3. Conditional tolerance is achieved via transcription-dependent CRISPR-Cas targeting. Tolerant spacers 17T, 43T, and 61T-1 target lytic genes than are silenced during lysogeny, whereas intolerant spacers 2B and 17B target genes that are constitutively expressed during lysogeny. C is a pGG3 non-targeting control. Blue bars = CFUs under erythromycin and chloramphenicol selection (i.e., cells carrying a stably integrated prophage and a pGG3 plasmid). Source

As their first test of this hypothesis, these researchers created five spacers that targeted various regions of the phage genome and inserted each one in turn into the CRISPR array on the plasmid. Three of these spacers targeted lytic genes that are silenced during lysogeny. All three were tolerant, i.e., did not interfere with lysogenization. The other two spacers targeted genes expressed during lysogeny and these were intolerant, reducing the number of CFUs with integrated prophages. More evidence that transcription across the target was required for CRISPR immunity came from a particular mutant that escaped targeting although its target sequence was unchanged. Its escape was attributed to a point mutation in the upstream promoter region that strongly reduced transcription of the target.

During prophage induction, previously silenced genes become actively transcribed. Thus, their hypothesis also predicts that when a tolerated prophage excises and "goes lytic," even a tolerant CRISPR spacer will strike. To test this they used mitomycin C to induce prophage excision. In lysogens that lacked a spacer targeting the phage, the prophage excised, replicated, and lysed its host. When a lysogen carrying a tolerant spacer was induced, the CRISPR defense struck and destroyed the excised phage, thereby preventing host lysis.

The molecular mechanism underlying this CRISPR tolerance has yet to be unraveled. This is one more example reminding us that although the basics of CRISPR defenses are well established, many interesting questions remain. There are subtleties, adaptations, and nuances that we are just beginning to explore.