« On The Definition of Prokaryotes | Main | Life on a Pig's Skin » 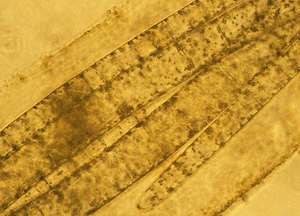 Figure 1. Filaments of two different species, Thioploca chileae (18 – 20 µm Ø) and Thioploca araucae (31 – 35 µm Ø) in the same sheath. Typical are the sulfur droplets in the cytoplasm, which arise from the first step of H2S oxidation. Source

The seafloor off the coast of Chile is carpeted with bacterial mats of gigantic proportions. They cover an area as large as that of the state of Alabama. Their total weight is of the order of 100 million tons, which probably makes this the largest single species microbiome on Earth. The mats consist of huge filamentous bacteria of the genus Thioploca — sulfur oxidizers that live within a sheath that can be as long as 15 cm. The bacteria themselves are quite large, around 60 µm in length and are arranged end to end within the sheath to form very long filaments. Each sheath contains a bundle made up of as many as 100 filaments. (Figure 1) The cells are unusually wide, in some species 12 – 22 µm in diameter, in others reaching 40 µm. Their giant size is due to a large vacuole, just as in the largest of all known bacteria, Thiomargarita namibiensis. For more on these extraordinary organisms, see our previous post.

Thioplocas are close relatives of the Beggiatoa, another group of giant bacteria that oxidize sulfides and that also make giant mats in marine and freshwater environments. For a review of the phylogeny of these and other giant bacteria, see here (see also Figure 2). 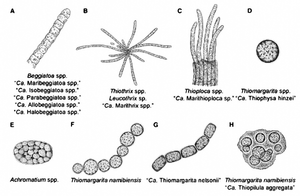 Many of these organisms oxidize sulfides using nitrate as their electron acceptor. But, so doing, they face a problem, namely that sulfides are abundant in the benthic sediments, nitrates in the seawater. How to accumulate both? To solve this problem, the cells commute within their sheaths, traveling downward to load up with sulfides, upward to fill their vacuole with nitrates (which they accumulate at concentrations hundreds of times that of seawater). They travel the sheaths at speeds of about one centimeter per hour. In other words, they take an elevator to work. Ah, the surprises at the bottom of the sea!