« A Snippet: Thioploca | Main | Fine Reading: There Is No 'Healthy' Microbiome »

Life on a Pig's Skin 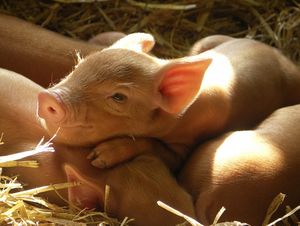 How frequently do microbes exchange genes when living on a host? This question has been on my mind lately. Broadly speaking, the discovery of horizontal gene transfer (HGT) revolutionized the way we think about prokaryotic evolution. No more could we think only of inheritance via vertical descent — HGT made possible the transmission of traits even between distantly related species. HGT is ubiquitous and ancient: the acquisition of mitochondria and chloroplasts  to make the early eukaryotes led to a mass exodus of bacterial genes from these endosymbionts to their new hosts. But how do processes of HGT impact us today, as individuals carrying around ten times the number of microbial cells as our own?

I chatted about these notions with my advisor, who reminded me that within-host HGT is nothing new. Even before scientists thought of DNA as hereditary material, Frederick Griffith showed in 1928 that microbes could acquire new traits from other organisms in vivo on a short timescale. Investigating pneumococcal types, he observed that co-administering living non-virulent and heat-killed virulent strains to a mouse converted the living strains into pernicious cousins, with dire consequences for the mouse. He implicated a chemical, which he termed the 'transforming principle.' It was more than a decade before scientists demonstrated that the substance behind the transforming principle was DNA.

In truth, we still know little about the role of HGT in the adaptation and diversification of host-associated microbes. Recently, McCarthy et al. (not to be confused with McCarty of the Avery-MacLeod-McCarty trio) showed that in skin-associated Staphylococcus aureus HGT took place within four hours during co-colonization of new hosts, in their case, germ free piglets. Moreover, HGT was unidirectional, going from host-adapted to non-adapted clones only. The processes involved here span a broad intellectual landscape — ecology, evolution, molecular biology, and physiology — making it not only an enticing scientific problem but also a substantial challenge.

These authors narrowed this broad scope by posing a focused question: how do differently host-adapted clones of S. aureus survive, adapt, and diversify during co-colonization? The authors asked how the transfer of mobile genetic elements contributes to the ability of S. aureus to acquire new traits. They took an in vivo co-evolution approach, infecting the skin of germ-free or gnotobiotic (of 'known life') piglets with both human-adapted (HA) and pig-adapted (PA) clones of S. aureus.

HGT between S. aureus clones can happen in vivo within four hours

Imagine that you're a bacterium growing in a rich medium surrounded by billions of cells just like you. Suddenly, you're whisked up and out of your warm nutrient broth onto a cotton swab trillions of times your size and rubbed onto a slightly warm surface covered in waxy, keratinized materials with little food in sight. You might well find this stressful. The investigators swabbed cultures of HA and PA S. aureus onto the sacrum and other skin areas of four gnotobiotic piglets, waiting to see what would happen (to the bacteria). They followed the fate of these strains for a sixteen-day period. In fewer than four hours, they observed transfer of plasmids from a pig-associated clone to a human-associated clone on a single piglet. Both strains underwent extensive rearrangements of their "mobilome" (their repertoire of genetic mobile elements, chiefly phages and plasmid). However, once colonized, exchange between strains essentially ceased. 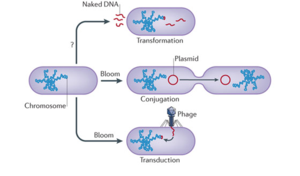 The kinetics of HGT surprised me at first, but consider the circumstances: after four hours, the S. aureus colonizers had spread to all body sites sampled, but their numbers were small. At most, there were a couple thousand viable cells per square cm, making transfer at this low cell density unlikely. The first transfer event probably happened almost right away, given that on initial infection the cells were at much higher density and considerably more stressed due to the abrupt change in environment. Stressful conditions and high cell density often lead to the activation of gene transfer processes, which could provide a simple explanation for the observed timing to gene transfer.

The known repertoire of gene transfer mechanisms is fairly small: 1 active uptake of DNA from the environment (transformation), 2 'microbial sex' or cell contact-mediated transfer of DNA (conjugation), and 3 transfer of DNA via a viral particle (transduction) (Fig. 2). Only one of these mechanisms is relevant to the S. aureus strain used in this experiment. Why? The bacteria used are inefficient at transformation, eliminating 1, and lack the genes for conjugation, taking care of  2, leaving only transduction, 3, as the likely mechanism for HGT. This means that acquiring plasmids requires that viruses randomly package DNA and transfer it to other cells via generalized transduction.

HGT is unidirectional from pig-adapted to human-adapted clones

The authors observed gene transfer on piglets only from the PA to the HA S. aureus colonizers. The two strains survived to the same extent on the piglets, so this distinction was not due to strain selection. The authors considered four types of mobile genetic elements: phage, plasmids, integrated conjugative elements, and transposons. The PA strains had four times the number of total mobile genetic elements and twice the number of transducing phages as the HAs. This difference alone might explain the observed unidirectional transfer. 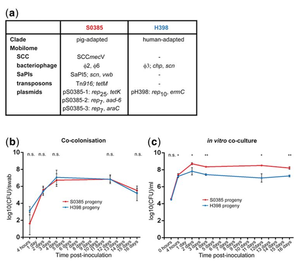 Beyond a simple numerical argument, the sheer diversity of mobile gene permutations acquired by the HA clones makes it hard to conclude that the transfer provided a selective advantage. Maybe on-piglet conditions broadly favor the proliferation of mobile genetic elements themselves, and not of their hosts. But the HA clone lost its only plasmid in all cases, whereas most of the PA clones kept all three of their original plasmids across the individual piglets. This result suggests that even if mobile genetic elements overall are not favored by selection, particular subsets of them might be. The obvious follow-up experiment would be to colonize a gnotobiotic human with these S. aureus clones, but this modest proposal might raise some eyebrows.

Regardless of the evolutionary principles operating in this system, life on a piglet is clearly distinct from that in a culture tube. The authors found that the rate of in vivo HGT (on-piglet) is higher than in vitro HGT(in rich medium). To begin answering mechanistic questions about why the host context imparts the observed rate of HGT, it's not sufficient to compare rates on a complex host with rates in a culture tube. Pig skin is a completely different environment from a culture medium high in nutrients. A sterilized skin piece from a gnotobiotic piglet or even an agar surface might be a better surrogate. This approach may be a reasonable way to ask whether in vivo HGT (on a living host) occurs at a different rate than in vitro HGT (on a non-living substitute). Perhaps activity of the host immune system or interaction with epithelial cells plays an important role in modulating the rate of HGT. 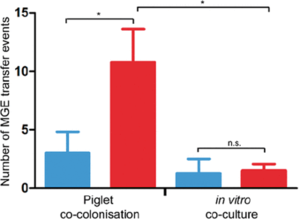 The authors also observed that the PA clone outcompetes the HA clone in culture, but not in vivo. Life on a piglet is probably just right for S. aureus — population sizes on each host became stabilized by the end of the experiment. Clones of S. aureus infrequently jumped between piglets, something the authors had not expected given the close contact between the animals in their sterile incubator. But consider the situation: the authors introduce a large number of S. aureus into a completely unoccupied environment. The S. aureus expands on the host, taking advantage of all of its favorite resources. Its niche is saturated; there's no room for other S. aureus to colonize. This principle of competitive exclusion is probably ubiquitous for organisms well-adapted to their environments. A recent paper on colonization of the gut by Bacteroides fragilis showed similar features. Here, attempts to introduce a second strain of B. fragilis were unsuccessful because the first had already taken over. Not surprisingly, ecology reigns supreme in understanding host-microbe interactions.

Eighty-six years after discovery of a 'transforming principle,' this experiment still invites many interesting questions. Does HGT happen with the same frequency on hosts with an intact microbiota or does microbial diversity modulate these processes? Do other organisms exhibit similar processes of adaptation and gene acquisition in colonizing a new host or environment? The widespread occurrence and ecological specificity of HGT suggests that the answer to many of these questions may be in the affirmative; organisms entering new environments will adapt more rapidly if using open source genomic innovation rather than slowly accumulating mutations. HGT is more efficient in an uncertain environment.

Sean Kearney is a PhD student for Eric Alm in the Center for Microbiome Informatics and Therapeutics (CMIT) at MIT. In the time he's not obsessing over horizontal gene transfer, he takes care of rescue animals (and their resident microbiota).