On The Definition of Prokaryotes

As will be argued below the present definition of a prokaryote is highly unsatisfactory. To give an example: a prokaryote is "a cell or organism lacking a nucleus and other membrane-enclose organelles, usually having its DNA in a single circular molecule" (Brock, Biology of Microorganisms, 10th Ed.). This  seems a summary of the original definition of Stanier & van Niel (1962), which I quote for the sake of completeness: "The principle distinguishing features of the procaryotic cell are: 1. absence of internal membranes which separate the resting nucleus from the cytoplasm, and isolate the enzymatic machinery of photosynthesis and of respiration in specific organelles; 2. nuclear division by fission, not by mitosis, a character possibly related to the presence of a single structure which carries all the genetic information of the cell; and 3. the presence of a cell wall which contains a specific mucopeptide as its strengthening element". Today’s perception of these points amounts largely, as indicated above, to the absence of a nuclear envelope in prokaryotes. It should be mentioned that Stanier & van Niel in the above paper also wished to differentiate a bacterium from a virus and to incorporate blue-green algae within the prokaryotic domain.

The paper of Stanier & van Niel appeared more than 50 years ago. In this contribution I will attempt to present a more modern definition of a prokaryote, keeping in mind that one should distinguish between two aspects: its definition and its distinction from a eukaryote. But, before doing so I will insert an historic intermezzo. 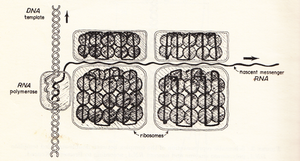 An alternative characterization of prokaryotes already emerged, though not explicitly, in 1964 through the study by Byrne et al. on the formation of DNA-ribosome complexes as analyzed by sucrose-gradient centrifugation.  In those times sucrose gradient data were graphically expressed with radioactive counts on the vertical axis and fraction number on the horizontal axis. In the paper of Byrne et al. the focus was on the cellular organization of transcription and on the stability of RNAs, in particular mRNA (then also named cRNA). Their labeling and fractionation experiments led to the following conclusion: "Our results suggest that some time after the onset of cRNA transcription on the surface of the gene, a ribosome will attach to the RNA molecule. This event may signal the beginning of polypeptide synthesis on the ribosome. The ribosome may then advance along the cRNA strand followed by other ribosomes, resulting in a continuous translation of the genetic message into polypeptide sequences." And further on: "In a sense, ribosomes in bacterial systems may be a rudimentary form of the 'carrier' ribonucleoprotein particles believed to transport cRNA from the nuclei of higher organisms." An electron micrograph of one of the fractions shows clusters of particles with ribosomal dimensions and threads, presumed to be DNA and perhaps mRNA (Figure 1). 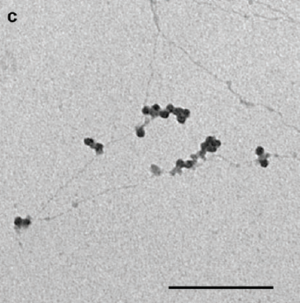 Protection of nascent transcribed RNA was also a concern of G. S. Stent (1966): "What kind of system might assure in vivo removal of the nascent RNA from the template?" In the case of mRNA ribosomes came to the fore and mRNA-protection became incorporated into the framework of coupled transcription and translation, that is translation starts before transcription has been finished (Figure 2). The conceptual drawing of Stent became reality through the impressive electron micrographs of Miller et al. (1970). (See also: Pictures Considered #1. Visualizing Coupled Transcription and Translation in E. coli, by Elio, 2013).

The distinction between prokaryotes and eukaryotes 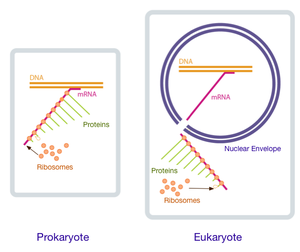 Figure 4. Structural organization of the flow of information in pro- and eukaryotes. Source

As mentioned above one should differentiate between definition and distinction. The fact that eukaryotes do not possess coupled transcription and translation — a negative qualification for some, by the way — does not tell us much about eukaryotes. Also the absence of a nuclear envelope in prokaryotes — a negative qualification too — is not very informative. What is fundamental in cells relates to the structural organization of information processing, i.e. the flow of information from DNA through mRNA to protein. Conceptually, this bears on the central dogma of molecular biology. Thus, the main distinction between pro- and eukaryotes lies in the presence or absence of coupled transcription and translation, respectively (Figure 4). Does this suffice as a definition for a prokaryote? This question is easier posed than answered. I may refer to another quotation from Stanier & van Niel in the same paper mentioned above: "The difference between eucaryotic and procaryotic cells are not expressed in any gros features of cellular function; they reside rather in differences with respect to the detailed organization of the cellular machinery" (italics by Stanier & van Niel). The absence of a cellular structure (a nuclear envelope) can hardly be considered an informative statement when it is known that transcription and translation are spatially coupled. The latter reflects the "detailed organization of the cellular machinery" and, I believe, this should be part of a definition, as should microscopic size and a cell wall.  If one contrasts prokaryotic cytoplasm with that of a eukaryote the presence of membrane-bounded organelles suspended in a dynamic cytoskeletal framework appears a dominant feature in the latter case. Such structural differentiation could hardly be accomodated for in a microscopic cell. Also remember that mitochondria and chloroplasts have prokaryotic dimensions. Following this reasoning a prokaryote can be considered a walled cell of microscopic size possessing coupled transcription and translation and a not-well differentiated cytoplasm. According to our present knowledge this applies to Bacteria and Archaea. Structurally there is a "deep gulf" (Lane, 2011) between prokaryotes and eukaryotes. To what extent this bears on their phylogenetic relationships remains to be seen.

Two observations seem at variance with the foregoing. Firstly, there is the remarkable membrane compartmentation of a planctomycete bacterium like Gemmata obscuriglobus (see here in STC). However, three-dimensional reconstructions suggest that the visual compartments are due to a sectioned lobed conformation of an E. coli-reminicent organism (Santarella-Mellwig et al. 2013). Implicating a prokaryotic organization. Secondly, nuclei do not seem to be devoid of protein synthesis, though the nature of the proteins involved are not known (David et al. 2012). Presumably, an exception that might prove the rule.