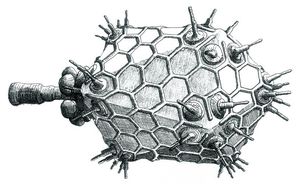 Figure 1. A representation of the virion of phage PZA, a close relative of φ29 that also uses protein-primed replication. This is one of 30 drawings by San Diego artist Ben Darby included in Life in Our Phage World by Forest Rohwer et al. (forthcoming in December, 2014; a lo-res PDF of the book is available for downloading here)

Although it is far from unanimous, the great majority of phages studied so far package their genomes for intercellular space travel as linear chromosomes. Why linear rather than circular? Packaging convenience, for one thing. Many phages, including all of the tailed phages, package their chromosomes into preassembled icosahedral procapsids through a portal located at one of the 12 vertices. With a linear chromosome, their packaging motor protein (terminase) can recognize and grab one end, then ratchet it in, bp by bp (or nt by nt for single-stranded DNA or RNA). This scheme also allows for directionality of packaging and, quite usefully, of chromosome delivery. The end of the chromosome that goes in last is typically the first out, thus the first to enter the host cytoplasm. Some phages have taken advantage of this by locating an 'early gene' operon at that end of the chromosome. Transcription of those genes can get underway immediately upon arrival, even before the entire chromosome has entered. This can be key to the phage's defense against host restriction endonucleases (REs) when those early genes include, for instance, an RE inhibitor that must be synthesized immediately upon arrival. 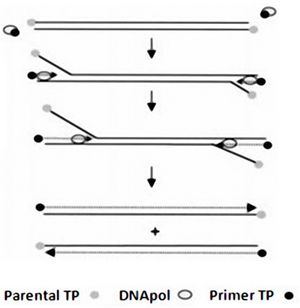 Figure 2. A schematic of in vitro replication of the phage φ29 linear chromosome. Not shown are the multiple copies of dsDNA-binding protein (p6) bound to the replication origins at the chromosome ends. In the first step, a TP (labeled Primer TP) has associated with each DNA pol to form the active heterodimer. Replication started a little earlier at the left end of the chromosome, using the lower strand as a template and displacing the upper strand. That upper strand serves as the template for the other DNA pol. The primer TPs remain attached to the newly synthesized strands and thus become parental TPs for the next cycle of replication. Source

Linear chromosomes present their own predicament, known as the end replication problem. For simplicity, let's focus on replication of linear double-stranded DNA (dsDNA) chromosomes. DNA polymerase (DNA pol) can synthesize a DNA strand in only one direction, starting at the 5' end and progressing towards the 3' terminus. Moreover, it can't add any nucleotide, including the one at the 5' terminus, unless there is a hydroxyl group to which it can be linked, at least temporarily. Most bacteria get around this by having circular chromosomes (puns happen). Many phages emulate this by covalently joining the ends of their linear chromosome after arrival in the host to form a circular replication intermediate. This is easy to do with a little preplanning. These phages package their chromosomes with 'sticky ends,' i.e., with short complementary overhangs that can self-anneal, the gaps being then closed by DNA ligase. In lieu of this, a few phages, such as N15, form hairpin 'telomeres' at both ends of their chromosome. On the other hand, retroviruses selectively package a specific host tRNA into their capsid along with the (+) genomic RNA, then use the 3'-OH end of the tRNA to prime synthesis of the (–) DNA strand.

There is yet another tactic that is used by a diverse collection of organisms and mobile elements including viruses of hosts in all three domains of life. Here DNA replication involves a protein primer and a member of the B family of DNA polymerases, a group characterized by high processivity and strand displacement capability, i.e., no helicase required. For priming, the hydroxyl group of a specific serine, threonine, or tyrosine in a dedicated protein provides the needed –OH group. When initiating DNA synthesis, the 5' terminal nucleotide of the new strand is linked to this –OH. After replication has been completed a priming protein remains covalently attached to both 5' termini — a distinctive feature of chromosomes replicated by this method. In addition, inverted terminal repeats (ITRs) are present that serve as origins of replication. In the case of phage φ29 (family Podoviridae), the most intensely studied practitioner of this protein-primed mechanism, the ITRs are 6 bp:

The details of φ29's DNA replication process have been probed and dissected in vitro, particularly by Margarita Salas and colleagues. To start, a dsDNA-binding protein (p6) associates with the ITRs at the chromosome ends to form a nucleoprotein complex that facilitates separation of the two strands. Meanwhile, a free TP binds to a DNA pol to form a heterodimer (TP-DNA pol) that recognizes the prepared replication origin. DNA pol then catalyzes linkage of a dAMP to the –OH of Ser232 of that primer TP and, after a transition step, initiates a new DNA strand starting with that dAMP at the 5' end. It proceeds to synthesize that strand all the way to the 3' terminus, letting go of the priming TP and displacing the other parental DNA strand in the process (see figure). Meanwhile, but not necessarily at the same time, another TP-DNA pol initiates synthesis from the replication origin at the other end of the chromosome. When both enzymes have reached the end of their respective strands, there will be two complete dsDNA chromosomes, each with a TP covalently joined to the 5' terminal nucleotide at each end.

Having TPs attached to your chromosome has its pluses and minuses. One minus is that you can't be the sort of temperate phage whose prophage inserts into the host chromosome. One plus is that the packaging terminase can use the TP to selectively package phage, instead of host, DNA. This recognition is sequence-specific as the terminase also distinguishes between the TPs of different phages. However, TPs do much more.

Efficiency is vital in the phage world. The phage that can turn its host cell into more progeny virions more rapidly will, under many circumstances, have a competitive advantage. Phage φ29 relies on its TPs to help organize its DNA replication efficiently. When an infecting φ29 chromosome enters a Bacillus subtilis host, it carries a parental TP attached to each end. Each TP is an elongated protein composed of 266 amino acids organized in three domains. The C-terminal domain includes the priming Ser232 while the intermediate domain serves to bind DNA pol to form the heterodimer needed to initiate DNA replication. The function of the N-terminal domain remained unknown until a few years ago when a group of researchers deciphered its story. They began by testing the behavior of the φ29 TP in a host cell in the absence of other phage proteins. When they engineered a B. subtilis strain to express an inducible CFP-TP (cyan fluorescent protein) fusion protein, they observed that the labeled TP localized to the nucleoid. They repeated this experiment using a B. subtilis strain expressing CFP fused instead to the TP of phage PRD1 (PRD1 infects quite different hosts, e.g., Gram-negative E. coli and Salmonella.) The PRD1 CFP-TP associated with the B. subtilis nucleoid. Conversely, when φ29 CFP-TP was expressed in E. coli, it also localized to the nucleoid. These results suggested that TPs bind DNA and do so in a sequence-independent manner.

To further characterize this DNA binding, the researchers determined which of the domains of the φ29 TP were required for this activity. They generated CFP fusions with truncated TP proteins that contained individual domains or pairs of adjacent domains and tested the ability of each to bind a 297 bp segment of dsDNA from the chromosome of either φ29 or B. subtilis. DNA-binding activity required the N-terminal domain (N-td). The extent of this binding was demonstrated in a DNase footprinting assay using DNase 1. The intact TP and any truncated TP containing the N-td protected the entire DNA segment. In a recent paper, they zeroed in on the specific residues in the φ29 N-td that are required for binding. The prime suspects were the 17 basic amino acids (23% of 73 total). They individually replaced each of those 17 with alanine by introducing specific point mutations. In addition they created a double mutant replacing lysines 25 and 27, and a triple mutant replacing lysines 32–34. Using an electrophoretic mobility shift assay  (EMSA), they assessed the ability of these purified mutant proteins to bind a 216 bp segment of the B. subtilis chromosome in vitro. Although the single deletions had no significant effect, the lysine double mutant (K25A + K27A) markedly reduced DNA binding. 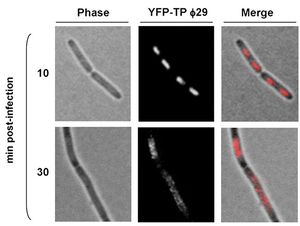 Figure 4. B. subtilis  cells expressing a xylose-induced YFP-TP fusion protein were infected with a φ29 delayed-lysis mutant at an MOI of 5 and imaged at 10 and 30 min PI. The phase-contrast, the YFP fluorescence, and the merged images together demonstrate the redistribution of phage replication from the nucleoid to a helical pattern extending throughout the cell. Source

The N-td is also required for efficient φ29 DNA replication in vivo. To demonstrate this, the researchers engineered a TP deletion mutant phage and host strains that expressed either the φ29 TP or a truncated protein lacking its N-td. The phage replicated normally when the host provided the complete TP in trans, but deletion of the N-td drastically reduced the amount of phage DNA synthesized post infection. To monitor the location of the TP during infection, they prepared φ29 phage encoding a functional YFP-TP (yellow fluorescent protein) fusion protein. At 10 min post-infection (PI), the YFP-TP localized to the nucleoid. Similarly, in another experiment using immunofluorescence they found that at 15 min PI the phage chromosome with its parental TPs attached is localized at the nucleoid. To associate with the nucleoid soon after entry is advantageous for the phage because that is where the host's RNA polymerase resides and likely also contains higher concentrations of the needed nucleotides. Prompt access to both allows the phage to quickly begin synthesis of the early proteins needed for DNA replication, including TP and DNA pol. The TPs then recruit the newly-made phage DNA pol to the nucleoid, thereby facilitating formation of the TP-DNA pol heterodimer needed to prime phage DNA replication.

By 30 min PI, the time of peak DNA accumulation, DNA replication has spread beyond the nucleoid. Now replication proceeds at multiple sites distributed in a helix-like pattern over the entire cell, as evidenced by the redistribution of YFP-TP. The TPs can’t do this alone. Another phage protein, p16.7, is also required to anchor the DNA to the membrane and exploit the host's cytoskeleton to organize and compartmentalize phage replication at late infection times.