The Fountain of Youth

The quest to live longer is not only the stuff of myths and legends, it is also the goal of some serious scientific research. An extensive literature in this area results from numerous experiments with primates, mice, worms, flies, and yeast. Aging is characterized by an accumulation of cellular insults caused by non-functional proteins, dysfunctional organelles, and damaged DNA and chromatin structures. Young cells are armed with mechanisms to combat these effects — a system known as the cellular stress response. This system includes enzymes that degrade reactive oxygen species, heat shock proteins that remove misfolded proteins, and mechanisms for recycling damaged organelles and repairing DNA. Stress response pathways are altered with aging, but the details regarding these changes remain poorly understood.

One would expect a phenomenon as complex as longevity to involve many contributing factors and, sure enough, that proves to be the case. Interestingly, one intervention in particular — calorie restriction (CR) — works across the board, extending the lifespans of most organisms studied ("live longer by dieting"). In the budding yeast, Saccharomyces cerevisiae, a number of CR-related mechanisms mediate lifespan extension. These include repressing ribosome biogenesis through downregulation of the TOR pathway kinases TOR1 and SCH9 ; enhanced mitochondrial function and oxidative stress response; and enhanced SIR2 (sirtuin) activity via an increased NAD+/NADH ratio. As you can see, this is not a game for the faint of heart. There are many components at play here, most of them quite complex.

Of course, any cellular process involves regulation of transcription, which requires that some part of the genome be either accessed or blocked. Since the genome of eukaryotes is packaged into chromatin, access to DNA elements requires what is called chromatin remodeling. See also here. Notice that this is not the old story of regulation of gene expression by proteins such as repressors and activators binding to a genomic sequence. What comes into play here is the access of a gene to its regulatory and biosynthetic elements. In eukaryotes especially, the chromosome is not just a twisted chain equally accessible throughout its length. Organization into nucleosomes alone requires that genes be subject to dynamic rearrangements in order to become available at different times to regulatory proteins, the replicating and transcriptional machinery, and repair systems. 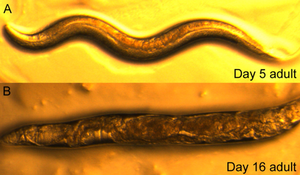 Figure 1. The gross morphology of youthful day 5 adult C. elegans  worms (A) compared with aged day 16 worms (B) is strikingly different. Aging in old worms is accompanied by declines in mobility, and the ability to sense and respond to environmental stimuli. Source

Recently, an enzyme involved in chromatin remodeling was implicated in longevity in the worm C. elegans. This finding prompted Dang and coworkers to further investigate the role of such remodelers in the aging process, using yeast as a model. In preliminary screens, deletion of a gene called isw2  extended both median and maximum lifespan by 24%. ISW2  codes for the catalytic component of an ATP-dependent chromatin remodeling complex.

Does ISW2  work alone or in connection with other well-known anti-aging processes? For instance, as yeast cells age, extra-chromosomal rDNA circles accumulate, contributing to aging. This effect is suppressed by a histone deacetylase, sirtuin or SIR2. Could the ISW2 gene be involved in this pathway? Apparently not. When introduced into sir2 deletions, isw2 Δ extended lifespans of the cells, implying that the two pathways work independently. 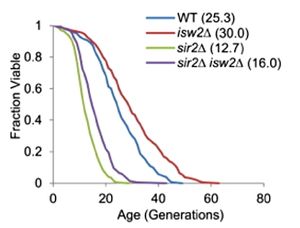 Next, is there a connection between isw2 Δ and the well-studied TOR pathway? CR inactivates the TOR1 kinase, which is thought to inhibit ribosome biogenesis. The isw2 Δtor1 Δ double mutant had a lifespan considerably longer than either of the single mutants, suggesting that ISW2  and TOR1 regulate longevity through distinct and parallel pathways. Counting CR, that adds up to at least three distinct longevity pathways. But not everything works in isolation. ISW2  requires ATP hydrolysis, so could the longevity-enhancing effect of isw2 Δ be related to the energetics of CR? Evidently so — for while limiting glucose concentrations extended the yeast lifespan, isw2 Δ was unable to push it further. This suggests that isw2 and CR might work through a common pathway. 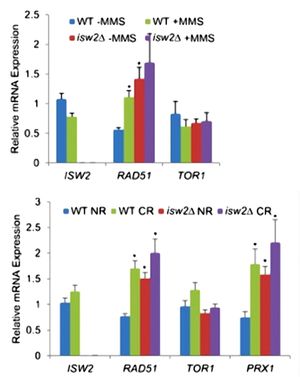 Figure 3. Gene expression by qPCR for WT and isw2 Δ cells with or without MMS (top) and in NR and CR conditions (below). Source

Given the key role of the stress response in combating aging, it is not surprising that microarray analysis revealed that stress response genes were the most significant group bound by ISW2 and derepressed in the isw2 deletion. But which stress response pathway is important for isw2 Δ-regulated longevity? Among the most derepressed genes in isw2 Δ is one required for homologous recombination, RAD51, which is important for DNA double-strand break repair. Not surprisingly, when ISW2 was inactivated, the cell's response to genotoxic stress by DNA-damaging agents was improved.  CR had the same effect, independent of isw2 Δ, once again indicating epistasis between CR and isw2 Δ. What's more, overexpression of RAD51 did not cause a decrease in ribosome formation, ruling out the TOR signaling pathway as its mechanism of life extension. 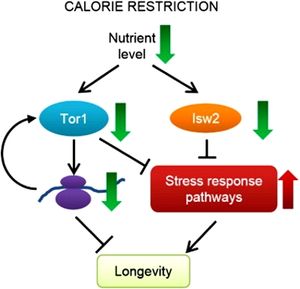 An additional clue to the relationship of ISW2 and CR involves the geometry of nucleosomes — the spools around which DNA is wrapped. Nucleosome positioning determines the accessibility of DNA to regulatory proteins and is thus crucial to gene expression. isw2 Δ is known to alter, or "shift", nucleosome positioning at specific loci. The upregulation of similar stress response genes by CR and isw2 Δ cells suggested that they share the same pattern of shifts. And sure enough, similar shifts were seen in wild type cells grown under CR conditions (0.05% glucose) and isw2 Δ cells grown under nonrestrictive conditions (2.0% glucose). Once again, these results indicate that isw2 Δ is one of the downstream effectors of CR.

But, as we realize, yeasts and people are not the same. One important difference is that yeast telomeres do not shorten with aging. In the yeast telomerase mutant, tic1 Δ, progressive telomere shortening does occur with aging, making it a useful model. When isw2 Δ was introduced into the tic1 Δ background, senescence was delayed by about 17%, suggesting that isw2 Δ may play a conserved role in the aging of multicellular organisms. To look into this, the researchers turned to the worm C. elegans, where they found a homolog of an essential subunit of the yeast ISW2 complex. When this gene was knocked down, the worm lifespan was extended by 15%. Moving further along the evolutionary tree, they knocked down the human ortholog of the yeast subunit in a fetal lung fibroblast. The result was upregulation of many stress response genes homologous to those previously found in yeast isw2 Δ and CR cells, suggesting that ISW2 -like chromatin remodelers may be part of a stress response pathway that is conserved across such genetically distant eukaryotes as yeast, worms and humans.

In addition to providing evidence of a widely conserved role for chromatin remodelers of the ISW2  family in extending lifespan, this study shows that caloric restriction induces two distinct and parallel routes toward longevity in yeast cells. One route involves downregulation of the TOR pathway, resulting in reduced ribosome biogenesis and protein translation. In the second route, downregulation of a chromatin-remodeling enzyme leads to derepression of stress response genes.

The fountain of youth, for yeast at least, runs a little clearer now!

Picture on main page: detail from "der Jungbrunnen" (the fountain of youth) by German painter Lucas Cranach the Elder, 1472 – 1553. Source