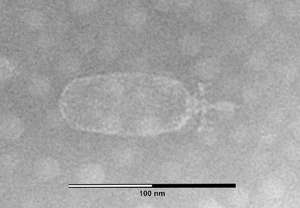 A variety of Bacteria, Archaea, and mobile genetic elements replicate their DNA as a linear chromosome using terminal proteins (TPs) to prime DNA synthesis, thus solving their end replication problem. As described in an earlier post, phage φ29 uses its TPs to also organize the sites of DNA replication for greater efficiency. The N-terminal domain (N-td) of Its TP localizes both the incoming phage chromosome and the phage TP-DNA polymerase heterodimer to the host cell nucleoid.

The usefulness of TPs for φ29 and other phages is clear, but there is another aspect that is puzzling. Analogously, some eukaryotic viruses, such as the adenoviruses infecting us and other vertebrates, employ nuclear localization signals (NLSs) to entice the cell to import the viral chromosome into the nucleus. Further, it is known that both eukaryotic NLSs and the N-tds of phage TPs characteristically contain a large percentage of basic amino acids. On a hunch, a group of researchers screened the TP sequences of ten phages and one archaeal virus in silico for recognizable NLSs. Their search identified putative NLSs in eight of these eleven TPs. 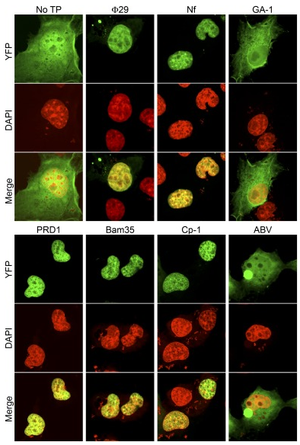 When they transfected these eight into mammalian COS-1 cells, five of the proteins localized to the nucleus. For the transfections they used 2YFP-TP fusion proteins, i.e., they attached two YFPs to each TP to yield fluorescently-tagged proteins that were 75 − 85 kDa. Their size is significant because nuclear pores generally exclude passage of proteins >50 kDa. Given their size, and given that their nuclear localization was found to be energy-dependent, these TPs seem to rely on the active import pathway used by eukaryotic cells to transport selected proteins into the nucleus. Granted, this tactic for nuclear entry was known for eukaryotic viruses and for bacteria (e.g., Agrobacterium), but these are phages.

Additional work by these researchers demonstrated the potential usefulness of these TPs to us as a tool for gene delivery into the nuclei of mammalian cells. Generally the nuclear membrane blocks the passage of DNA fragments longer than ~300 bp. This barrier is often cited as one of the reasons for the less frequent movement of genes from prokaryotes to eukaryotes via horizontal gene transfer (HGT). Perhaps larger DNA fragments with NLS-containing TPs attached would readily cross that obstacle. To test this, they utilized an in vitro system to synthesize heterologous DNA molecules (5.3 kb) with the φ29 TP attached to each 5' end. Presence of the TPs increased the nuclear entry three- to fourfold. Since that increase might be due to protection of the DNA from exonuclease degradation, they ran another control using proteinase K-treated TP-DNA. This treatment — that removed the NLS but left short, protective peptides attached to both DNA ends — markedly decreased the nuclear transport.

Given these observations in the lab, the authors speculated a bit and proposed a model in which phage TPs expedited horizontal gene transfer (HGT) from bacteria to eukaryotes in nature. Mention of prokaryote-to-eukaryote HGT brings to mind gene acquisition from organelles and endosymbionts, but a broader perspective was encouraged by Doolittle in 1993 in a paper with a catchy title: You are what you eat. Picture a gazillion phagotrophic protists dining on a million gazillion bacteria. Said bacteria might contain numerous actively replicating phages. In the process, phages frequently recombine (usually illegitimately) with one another or with host DNA, occasionally incorporating a bacterial gene into their chromosome. If that phage uses TPs, then as the bacterium is digested, the phage chromosome, its ends protected from exonucleases by 5'-TPs, might make its way out of the lysosome and into the nucleus, there to recombine with host DNA. The probability of some useful bit of DNA from dinner making it into the nucleus and thence into the cell’s chromosome is exceedingly small even with TPs attached, but, given the number of phages, bacteria, and protists, such events become likely over evolutionary time. When you consider that some linear plasmids and transposable elements also have TPs, even more opportunities for TP courier service arise. Makes me wonder if there might indeed be something evolutionarily significant lurking here.

Even more I wonder what would be the fitness benefit of an NLS in a phage TP. Muñoz-Espín, one of the researchers, suggests an intriguing possibility (personal communication): "The emergence of the eukaryotic cell during evolution presented viruses with a new challenge: how to penetrate the nuclear envelope to access cellular metabolites and machinery needed for their own replication. It is tempting to speculate that, in the case of phages that replicate using protein primers, the presence of NLSs within the TPs might have facilitated the entry of both the viral genome (with parental TPs at both ends) and the TP-DNA pol heterodimer into the cell nucleus, the site of replication. In support of this scenario, eukaryotic adenoviruses and phage PRD1 — both of which use protein-primer DNA replication — have been postulated to share a common ancestor based on structural similarities of their major capsid proteins and their overall virion architecture. Further, there is evidence that the NLSs and DNA-binding domains in the TPs also share a common origin, suggesting that evolution adapted existing DNA-binding mechanisms to direct DNA into the new nuclear location."

Still I wonder why these NLSs have been maintained in some phage genomes since the origination of the eukaryotic cell so long ago.