Why should we consider this year's Nobel Prize in chemistry, and why in our 'Pictures Considered' section in the first place? A hint comes from one of the many press releases: "... for improving the resolution of optical microscopes." Aha! Microscopes are at the heart of microbiology since Robert Hooke (†1703) and Antonie van Leeuwenhoek (†1723). An aside: It was kind of 'natural' to choose a microscope as icon for this blog, because self-explaining. But as any attendee of a basic course in microbiology learns, light microscopy is physically restrained by Abbe's diffraction limit, which means that in practice structures smaller than ~1/2 of the wavelength of  'visible light' (390 – 700 nm for humans) cannot be resolved. Too bad if you want to look at structures inside bacteria en détail (E. coli: ~1 µm, depending on growth conditions) or observe phages attaching to host cells (phage T5: 90 nm Ø capsid,  250 nm long tail). Electron microscopy and — more recently — cryo electron tomography are a way out: both techniques can resolve structures down to the sub-nanometer range. But in contrast to light microscopy they don't allow us to watch live cells.

Over the last two decades, staining structures in live cells for microscopic analyses with specific fluorescent dyes and localizing proteins by tagging them with fluorophores or variants of the green fuorescent protein (GFP) has become state-of-the-art, thus overcoming the notoriously low contrast of cellular components. Rather than proving the Abbe diffraction limit to be wrong, the Nobelists developed methods to tinker with the excitation states of fluorophores — but this in truly ingenious ways, worth a Nobel Prize in chemistry. One of the novel techiques, STED microscopy, allows to resolve structures in live samples down to ~20 nm. Rejoice the virus & phage aficionados!

Figure 1. Principle of Stimulated Emission Depletion (STED) Microscopy. A conventional exictation spot (green) is overlayed with an optical vortex depletion beam (orange) to confine fluorescence emission to a sub-diffraction volume, and then scanned across a sample to create an image. Source

How it works. In STED microscopy, a standard diffraction-limited focal spot (Fig. 1, left) is used — as in confocal laser scanning microscopy (CLSM) — to excite a fluorophore in the sample. A doughnut-shaped STED (stimulated emission depletion) beam with a zero-intensity spot in the center is co-aligned and superimposed on the excitation spot to silence fluorescence at the periphery  (Fig. 1, middle), resulting in a much smaller area of remaining fluorescence (Fig. 1, right). And by increasing the STED intensity, the fluorescence silencing affected by the STED beam yields an ever-smaller spot of remaining fluorescence and higher image resolution. Both beams scan through the sample, point by point, to construct a subdiffraction-resolution image. Since up to 200 pictures can be 'sampled' per second(!), also movies are feasible. Imagine peeking at endo- and exocytosis in real-time! 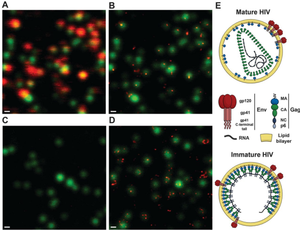 An example. The lipid envelopes of HIV-1 virions ― having diameters of ~145 nm ― carry trimers of dimers of the viral envelope Env protein (gp120) and the transmembrane protein gp41 (Fig. 2, E). Env proteins mediate virus binding and fusion with the target cell membrane. They are thus essential for infectivity. Incorporation of the 7 to 14 Env trimers into the virus particle is thought to occur through interaction of the gp41 C-terminal tail with the viral structural polyprotein Gag. Concomitant with budding from the host cell, the immature Gag lattice underneath the viral membrane is dissolved into its constituent domains via HIV-1 protease. This results in formation of the mature, infectious HIV-1 virion structure. Chojnacki and co-workers visualized the distribution of the GFP-tagged Env protein on the surface of individual immature and mature HIV-1 particles with STED microscopy (Fig 3., B+D). They found that maturation-induced clustering of Env proteins depends on the Gag-interacting Env tail. A hint for the non-expert: compare the higher number of red fluorescent Env foci in Fig. 3 D (immature virions) to their lower number in Fig. 3 B (mature virions). The correlation of Env surface-clustering with the viral infection efficiency suggested a coupling between the viral interior and exterior: rearrangements of the inner Gag protein lattice apparently facilitated the alteration of the virus surface during maturation.

Back to reality. Unlike electron microscopes, STED microscopes are no bulky machines that come with lots of accessory equipment. But you wouldn't take one with you on field excursions either. Not the least because of their noble prices: while 'conventional' confocal laser microscopes already come at $ ~500 K, STED microscopes are not available for less than twice that fortune. No wonder microscopy labs usually don't allow untrained scientists or amateurs a 'hands-on'.