"The Great Plate Count Anomaly" that is no more 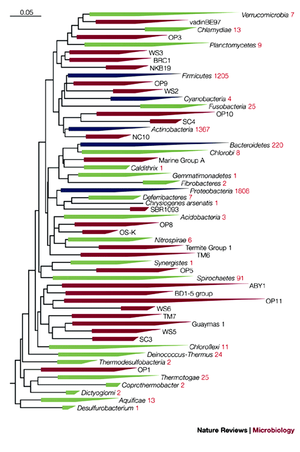 (Click to enlarge) Figure 1. Many bacterial phyla still have no cultivated representatives (in magenta) and even those with cultivated members (red numbers next to the blue and green branches) have many more yet to be cultured.The scale bar corresponds to 0.05 changes per nucleotide position (16S rRNA). Source

For over a century, microbiologists have been using growth media solidified with agar to culture microbes from environmental samples. Individual cells are easily separated on the solid surface, allowing each cell to grow and divide and form a colony of thousands of clones. We can change the nutrients in the media and physical parameters such as temperature and pH to promote the growth of different microbes. But no matter the trick, we still fall short and can only successfully cultivate in the lab a few microbes of the many that we can see under the microscope in the original sample. Estimates are that we can cultivate roughly one out of every 100 microbes. This is what has been described as "The Great Plate Count Anomaly". We have discussed this in the blog before, and not much has changed since then. So great has our frustration been that we have bypassed the growth step altogether and developed approaches to directly sequence the genomes of the so-called "unculturable" microbes from the environment. We have learned a lot from the sequence information, but our knowledge is still limited by our inability to grow these microbes in the lab. And, as many rightly say, "to really know them, you have to grow them".

In a paper published in Applied and Environmental Microbiology, Tanaka et al. confirm something that we have been suspecting: we have been doing it wrong all this time. It turns out that the standard practice of autoclaving agar and phosphate buffer together to make solid growth media generates byproducts that kill many cells and prevent us from cultivating many of the "unculturable" microbes. The researchers did some good detective work first. Their group had successfully cultivated the first representative of the phylum Gemmatimonadetes, a bacterium by the name Gemmatimonas aurantiaca T-27. To do so, they tested the same growth medium with a different gelling agent and hit the jackpot with gellan gum. Nothing else had changed in the medium, just the gelling agent, yet the replacement promoted cell growth on the plates and enabled the recovery of the bacterium in pure culture. This had been observed before but nobody had looked into it.

Figure 2. Autoclaving agar and 2 mM phosphate together (A) or separately (B) made all the difference in the plating efficiency of Gemmatimonas aurantiaca T-27. Modified from Source

The agar, they reasoned, or agar byproducts released during autoclaving, may have been reacting with other chemicals in the medium and generated growth inhibitory compounds. They were right: all they had to do was to autoclave the agar and the phosphate separately and the plating efficiency skyrocketed. Removing the phosphate altogether had a similar positive effect, presumably because the medium had enough traces of phosphorous to satisfy the growth requirements without generating any inhibitors. They report that, when autoclaved together, the agar and the phosphate react in some way and that hydrogen peroxide, a well-known disinfectant, accumulates in the medium. No wonder most microbes did not grow under these conditions! You can guess that these conditions would only allow the growth of microbes with the ability to breakdown the peroxide. Some microbes secrete catalase, which breaks down the toxic peroxide into water and oxygen. Since Gemmatimonas does not produce the enzyme, they supplemented the plates with it and effectively rescued the plating efficiency in the "bad" growth medium (what they called Pt medium).

The secret to plating success 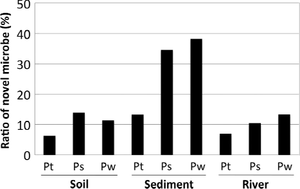 Figure 3. Ratio of novel microbes isolated on solid growth medium whose agar was autoclaved together (Pt) or separately (Ps) from phosphate or in media without phosphate (Pw). Source

The simple act of autoclaving the agar and the phosphate separately (Ps medium) allowed the researchers to successfully cultivate many other bacteria from soil, sediment, and river water samples. The number of taxa cultivated with this improved method reflected quite faithfully the microbial diversity revealed with cultivation-independent approaches (454 pyrosequencing). Even representatives from the least abundant and difficult to grow groups such as Armatimonadetes and Verrucomicrobia were isolated with this technique. Furthermore, cultivation successfully isolated far more Actinobacteria than detected in the original environmental sample by pyrosequencing. The study did not attempt to change the media composition and only considered the simultaneous versus separate autoclaving of agar and phosphate as variables. Yet the possibilities are endless, as many other components of the medium and incubation parameters could be tested. Furthermore, although the chemical basis of hydrogen peroxide generation from the reaction of agar and phosphate under heat is not known, other media components could be tested for their reactivity during autoclaving and for their potential to generate growth inhibitors. We have not paid much attention to these cultivation variables before, but now we know better. Sterilizing media components separately may be the key to tap on the great diversity of microbes and recover many of them in the lab with traditional cultivation approaches. So simple and so full of promise. The outlook for traditional microbiology could not be better!